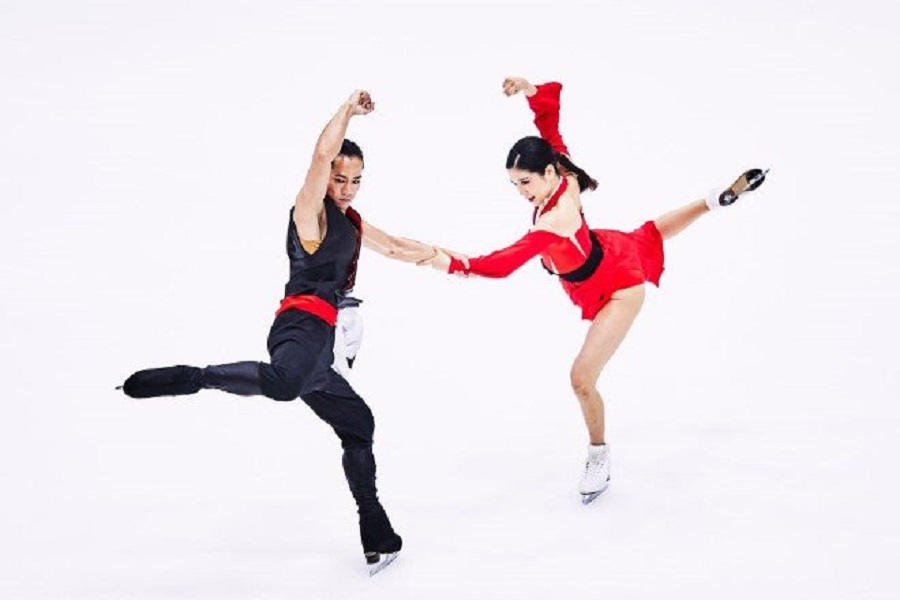 Green/Parsons (USA) dance to lead in Rhythm Dance in Tallinn

Performing to a Janet Jackson medley, Green/Parsons picked up a level four for the twizzels, the Midnight Blues pattern and their curve lift while the pattern dance step sequence and the midline footwork merited a level three. The Warsaw Cup bronze medalists surpassed their previous personal best by five points with a score of 80.62.

“We’re really happy with our performance. Everyone’s goal is to peak at the end of the season at Championship events like this and it’s definitely the most solid rhythm dance we’ve put down this year,” Parsons commented.

“We had a little, short period of recovery and then just got back into training and cleaning the stuff we thought we could improve on from Nationals and setting ourselves up to be in the mindset to compete again,” Green said. “Of course it’s funny (to be in Tallinn for Four Continents) but any opportunity for us to compete is a good one. We are just so happy to be here and happy that the event is held here – it’s so well run and we are just really excited to compete,” she added.

Muramoto/Takahashi had opted for a very unusual combination of traditional Japanese music and Hip Hop with “Soran Bushi” and “Koto”. The National silver medalists collected a level four for the Midnight Blues and the rotational lift as well as for her twizzles. However, they had to overcome a shaky start when she fell right at the beginning on a transition move. Nevertheless, the Japanese team scored 72.43 points.

“We had a very big mistake at the beginning that we never do but we’re really happy with how we performed even after the mistake. It’s our first (international) championships and second season together. I think what we achieved coming up here is a really big thing,” Muramoto noted.

“It had been nine years since the last time I was here (at Four Continents, as a single skater),” Takahashi, the 2010 ISU World Champion and Olympic bronze medalist, told the press. “I felt very nostalgic. It’s my first time as an ice dancer, so it’s something fresh and new. I would never have thought of coming back competing as an ice dancer, so I’m very glad and thankful.”

“Some parts (of the performance) were good and some parts weren’t as good; I don’t think it was our best performance of the season. It’s our first (ISU) Championship event so we are just looking forward to get experience,” Carreira said.

Skating to “Toxic” and “Survivor”, Lu/Mitrofanov completed a side by side triple Salchow, a triple twist, throw triple Lutz and collected a level four for the lift, footwork and side by side spin. The Golden Spin of Zagreb Champions scored 68.35 points.

“There were still some small mistakes in terms of levels and we’re going to come back and continue working on them. Our goal (for the Free Skating) is to put out a solid performance, put in the triple Salchow-half loop-triple Salchow, and be able to show a clean program and nice, great skating,” Mitrofanov commented. “After returning from Golden Spin (in December) my blade accidentally caught Audrey’s cheek on a death spiral and sent her to the emergency room for 7 hours. So we didn’t have as much time to prepare for Nationals,” he added.

Walsh/Michaud’s performance to “Lost Without You” by Freya Ridings included a side by side triple toeloop, throw triple loop and four level-four elements. The National silver medalists netted 65.42 points.

“We’re very grateful that 4CC is taking place this year. It’s the volunteers and everyone have made it very safe for us, we feel very safe being here,” Walsh noted. “This (Estonia) was also our first Junior Grand Prix ever skating together, so we’re familiar with the place and we walked around the town and there was a lot of recreating photos, so we’re very grateful to be here,” she continued.

Chan/Howe produced a strong triple twist, a throw triple loop and a level-four lift and spin in their routine to “Nyah” to earn 64.47 points. However, the triple toe was underrotated.

“It went well for us. It was a joy to be out there, especially in as big an event at this. We’re grateful we were able to deliver what we know we can in moments like these,” Howe explained. “For our first time at Four Continents, it was really exhilarating. I felt really free on the ice and joyful that we were able to perform what we practiced and how we train at home,” Chan agreed.

Three-time ISU Four Continents medallist Mai Mihara of Japan tops the Women’s Short Program and is poised for another medal at the event. Korea’s Haein Lee and Yelim Kim follow in second and third.

Performing to “I Dreamed a Dream”, Mihara landed a triple Lutz-triple toe, a triple flip, double Axel as well as level-four spins and footwork. The 2017 ISU Four Continents Champion set a new personal best with 72.62 points.

“Well of course my aim and goal is for the gold medal - the small gold medal I have around my neck right now - the larger one,” the 2018 Four Continents silver medalist noted. “In order to have a good result I know I need to have a perfect and clean free program. I hope I can do everything that I plan to do and overcome all the regrets and bitterness I felt at the nationals.”

Lee’s program to “Ave Maria” was highlighted by a triple Lutz-triple toe combination, a triple flip, a double Axel and difficult spins. The 2019 ISU Junior Grand Prix finalist improved her seasons best by six points with a score of 69.97 points.

Kim hit a triple Lutz-triple toe, double Axel and triple flip in her routine to “Liebestraum”, but the step sequence was rated a level two. The Korean silver medallist earned 69.93 points.

“It was good, except for some details, some spins and steps, so I’m a little bit disappointed about that,” Kim said. “I have two weeks before the Olympics so I want to do more about spins and steps so that I can get a higher score. This Four Continents is more special, because most Olympic team members are not here, so it’s a very, very good chance for me, so I’m here,” she added.