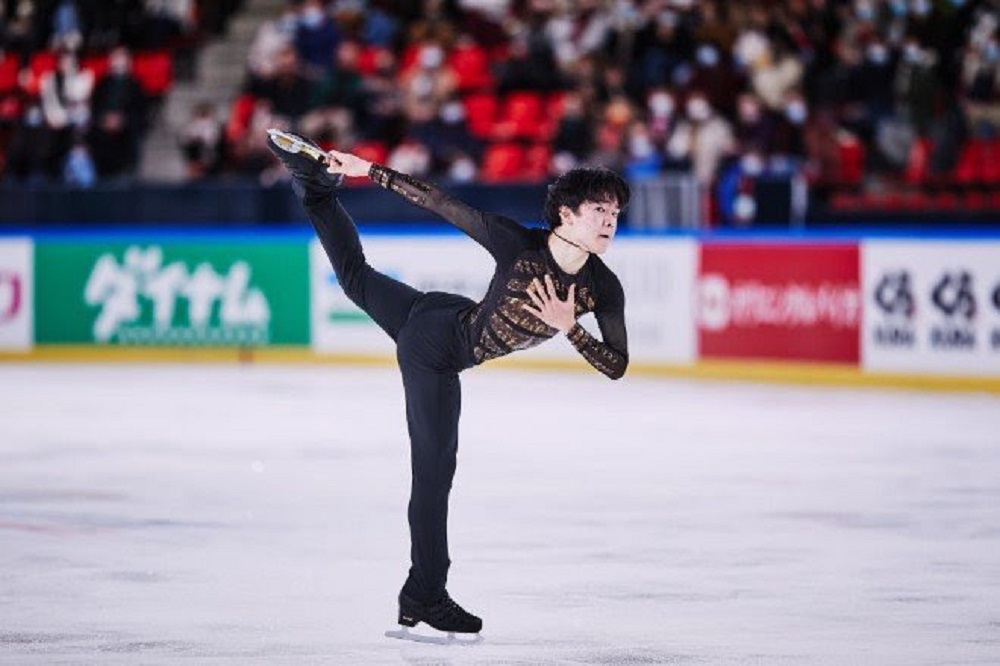 Overnight leader Shcherbakova had to overcome a shock at the beginning of her program to “Ruska”, “The Master and Margarita” and “Lacrimosa” when she slipped on the take-off for her planned quad Lutz and fell. The 2020 European silver medalist recovered instantly to hit a quad flip and seven triple jumps including triple-triple combinations. The spins and footwork merited a level four. The World Champion scored 151.75 points for a total of 229.69 points.

“I was shocked after the performance – I didn’t understand what happened on my first jump and after the program I was still not realizing what happened,” Shcherbakova said. “The jumps went well in the warm-up and I was very confident. The mistake threw me off and I was very upset, but I did all my elements afterwards, which was very important.”

Performing to “Lovely” by Billie Eilish, Kostornaia had a shaky start as well, missing her triple Axel, but rallied to produce seven triple jumps and level-four spins. The 2019 ISU Grand Prix Final Champion set a season’s best with 145.41 points and accumulated 221.85 points overall for her second Grand Prix medal this season following her bronze at Skate Canada.

“I made a mistake on my triple Axel, a big mistake,” said Kostornaia. “I was shocked because I did it in the practices in Moscow and we hoped I'd do two triple Axels, but I couldn’t and it was sad. But I did the other jumps and I'm happy about it.”

Higuchi delivered an excellent performance to the “Lion King” that featured a slightly under-rotated triple Axel (q) and six clean triples. The 2018 World silver medalist achieved a personal best with 141.04 points, which added up to 204.91 points.

“Today was the best performance of the season and I am satisfied,” said the Japanese skater. “I made some little mistakes, that’s why my score was 141 points, but it is a good learning curve and I can improve going into Nationals.”

Shcherbakova now advances to the ISU Grand Prix Final with her two victories on the circuit. Kostornaia most likely made it with her silver and bronze, but will have to wait and see what happens next week at Rostelecom Cup.

Once more, Papadakis/Cizeron put on a mesmerizing performance, their dance to “Elegie” by Gabriel Fauré highlighted by intricate footwork and beautiful lifts. The five-time European Champions collected a level four for the lifts, the combination spin and her part of the twizzles and one-foot step sequence while the diagonal step sequence and his twizzles were rated a level three. The multiple French Champions scored 132.17 points and totaled 221.25 points.

“It was a good performance, but not perfect, there are some things we have to work on,” Papadakis said. “There are some levels we need to work on,” Cizeron added. “We have two weeks before the Grand Prix Final to improve.”

Dancing to “The Long and Winding Road” by The Beatles, Gilles/Poirier executed level-four lifts, twizzles and a level-four combination spin while the midline step sequence merited a level two. The 2021 World bronze medalists earned a total of 203.16 points.

“We made some improvements compared to Skate Canada, but our score is a bit lower and we need to go back and evaluate that,” Gilles said. “We are excited to go back to the Grand Prix Final and we’ll go home and work on the things (levels) we lost here.”

Stepanova/Bukin’s dance to “Romeo and Juliet” featured five level-four elements, but the one-foot step sequence earned only a level one. The Russian Champions picked up 120.40 points, just short of their season’s best, and accumulated 200.29 points.

“We’ve made a little step forward since our first Grand Prix in Italy and we are more satisfied with what we did here,” Bukin said. “Each competition is a preparation towards the Olympic Games, regardless of the level." Stepanova added: "We hope to improve from one competition to the next to be in the best possible shape for the Olympic Games.”

Papadakis/Cizeron qualified for the ISU Grand Prix Final with two wins in the series while Gilles/Poirier advance with a first and a second place. Evgeniia Lopareva/Geoffrey Brissaud (FRA) moved up one spot to finish fourth with their program to “Adagio” by Tomaso Albinoni (175.94 points). Christina Carreira/Anthony Ponomarenko (USA) came fifth on 175.91 points followed by Annabelle Morozov/Andrei Bagin (RUS) on 172.32 points.

The 2021 World silver medalist Yuma Kagiyama (pictured, JPN) scored his second ISU Grand Prix victory of the season at the Internationaux de France in Grenoble. Shun Sato rose from fourth to second to make it one-two for the Japanese Men, while Jason Brown (USA) remained in third place to take the bronze.

Performing to music from “Gladiator”, Kagiyama nailed a quad Salchow, quad toe-triple toe, a somewhat shaky solo quad toe and five triples including an Axel. His only major error came when he singled the second planned Axel. The 2021 Gran Premio d’Italia Champion earned 185.77 points and racked up 286.41 overall.

“I am really happy to win the second gold in my first Grand Prix season,” the 2020 World Junior silver medalist commented. “The Grand Prix Final was part of my goals for this season and since it takes place in Japan, I really wanted to take part there and I am glad I make it.”

Sato’s performance to “The Phantom of the Opera” featured a quad Lutz, quad flip and two quad toes that were a bit wobbly as well as two triple Axels. The 2019 ISU Junior Grand Prix Champion set a season’s best score of 177.17 points and moved up two spots with 264.99 points overall to capture the first ISU Grand Prix medal of his career.

“This is my first Grand Prix season and finishing on the podium was my goal,” Sato said. “I am really happy to be on the podium for the first time but I need to catch up to Yuma so I will work hard,” he added.

Brown opened his emotional program to “Schindler’s List” with a quad Salchow that was slightly two-footed and went on to complete five clean triples, but he singled the Salchow and doubled the loop. The 2020 ISU Four Continents silver medalist was ranked fourth in the Free Skating with 174.81 points but held on to third place on 264.20 points overall.

“This is my eighth or ninth Grand Prix season and I feel so lucky to still be up here,” Brown said. “I’m really happy to be up on the podium today. My second half (of my program) was a bit rough but I am proud of the first half. It’s definitely learning a lot as the season goes on and trying to kind of take every step along the way and grow from them and bring it into the next competition,” he continued. Brown must wait to see whether his second place at Skate Canada International and third place here in France will be enough to take him to the Final.

Deniss Vasiljevs (LAT) dropped from second to fourth place on 254.48 points. 2020 European Champion Dmitri Aliev (RUS) finished in fifth place (253.56 points) while Keegan Messing (CAN) rounded up the top six on 253.06 points. Andrei Mozalev (RUS) ranked second in the Free Skating and moved up from ninth to seventh (248.54 points).

2021 ISU World bronze medalists Aleksandra Boikova/Dmitri Kozlovskii of Russia secured their first Grand Prix victory this season Saturday at the Internationaux de France in Grenoble. Teammates Iuliia Artemeva/Mikhail Nazarychev took the silver, a step up from their bronze in Turin. Alexa Knierim/Brandon Frazier (USA) moved up from fourth to earn the bronze.

Boikova/Kozlovskii put out a characteristic and dynamic performance to “Malaguena” that was highlighted by a triple Salchow, triple twist, throw triple flip and loop as well as level-four lifts, pair combo spin and death spiral. The 2020 European Champions achieved a season’s best with 139.79 points and totaled 216.96 points to win the fourth ISU Grand Prix gold medal of their career.

“We fulfilled our minimum task which was to qualify for the Grand Prix Final,” Kozlovskii said. “It was much easier to skate today as this I our second competition. We skated much better than at Skate America, there is progress, which is the most important thing. There were some small errors, really stupid ones, but that’s what competitions are there for, to improve from one to the next,” added Boikova.

“We are pleased for today. There was one mistake, a major one, but overall it was a good performance. We set goals for ourselves to do well on the Grand Prix and I think we fulfilled that,” Nazarychev noted.

The couple will have to wait and see if their silver and bronze medals from the Grand Prix series will get them into the Final.

“We are very happy to win our first Grand Prix medal. We left some points on the table today but we made a lot of great improvements from our last event. We have plans to keep improving and we are proud of today’s work,” Knierim shared.

Vanessa James/Eric Radford (CAN) slipped from third to fourth after they aborted a lift (196.34 points). Rebecca Ghilardi/Filippo Ambrosini (ITA) came fifth on 176.19 points.