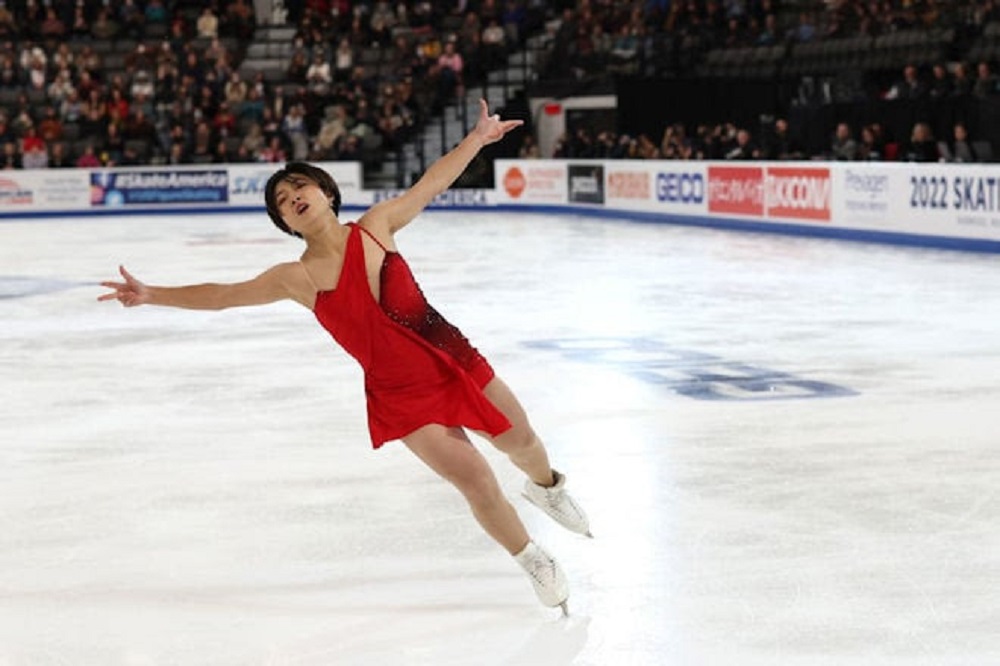 Three-time ISU World medalists Madison Chock/Evan Bates (USA) danced off with the third Skate America title of their career. However, silver medalists Kaitlin Hawayek/Jean-Luc Baker (USA) were less than a point behind their compatriots, while Canadians Marie-Jade Lauriault/Romain Le Gac took the bronze, the first Grand Prix medal of their career.

Chock/Bates debuted their new Free Dance to “Film III”, “Les Tectoniques” and “Fem III” by Canadian musician Jorane and earned a level four for their twizzles, the dance spin and curve lift and a level three for the diagonal step sequence. However, his part of the one foot step sequence garnered only a level one and the Americans did not get credit for their choreo step sequence. As a result, Chock/Bates were ranked second in the Free Dance at 120.17 points, but remained in first place at 202.80 points total.

While the couple earned their third Skate America title and fourth Grand Prix title in total, it was their first since 2015.

“Overall we are pleased with how our first competition of the season went. To perform the free dance was a joy. We have a few technical details that need some work - like a missing element – but we’ll put that back in and we’ll be on our way,” Chock commented.

Hawayek/Baker put out an emotional performance to “Requiem” and “Sofia” by Askjell Solstrand, producing five level-four elements. The 2014 ISU Four Continents Champions won the Free Dance segment with a personal best score of 122.95 points and claimed silver with 202.07 points. They had won a Grand Prix in 2018 and were second at the domestic Grand Prix Skate America in 2020.

“Today we were very aligned, very grounded going into the event and we really performed,” Hawayek said.

“We were really happy with the response today, not even score-wise, but the atmosphere we were feeling we created when we finished our program. It was a joy to skate here in Norwood.”

Lauriault/Le Gac entertained the crowd with their “Pink Panther” routine and collected a level four for their combination lift and twizzles. However, their choreo step sequence received no value and they got a deduction for an extra element. Nevertheless, the husband-and-wife team came close to their personal best with 106.18 points for the Free Dance and accumulated 178.30 points overall to take bronze.

“It’s really special,” Le Gac shared. “Since our last Grand Prix three years ago we came here with another mindset to reach for a new goal and to get a medal. We are happy we reached that goal by doing what we were doing in practice. We really felt the support of the crowd here and it was a special moment for us.”

Skating to “Elastic Heart” by Sia, Sakamoto reeled off six clean triple jumps including a triple flip-triple toe combination in the second half of the program as well as three level four spins. She only under-rotated a triple toe loop in combination with a double Axel. The 2018 ISU Four Continents Champion set a season’s best score of 145.89 points to total 217.61 points.

“This is actually my fifth time to come to Skate America and the first time to win a gold medal,” Sakamoto said.

“So I’m truly delighted about that. After the Short Program I was very determined to make sure I could to my triple-triple combination and I focused on that.”

Levito’s performance to “My Sweet and Tender Beast” included four strong triples, but her opening triple Lutz was somewhat shaky and she slightly underrotated a triple toe. The reigning World Junior Champion picked up 135.36 points, a new season’s best, which gave her 206.66 points overall.

“It is my first Grand Prix and it was really cool it was here in front of a home crowd in America,” the 15-year-old noted.

“I feel like I did pretty good in my Short Program. My long program definitely was not as good in my opinion, I definitely made mistakes here. But I’m still happy with the experience.”

Glenn went for a triple Axel in her routine to “Without You”, but under-rotated and stepped out of it. She went on to complete six clean triple jumps and set a personal Free Skate best of 129.19 points; overall she had 197.61 points.

“The Short Program was pretty good but I feel like left a lot on the table in the free skate. There were some obvious mistakes and some not so obvious ones. I felt like I held back and played it safe. But I’m very happy with the result and proud to have my first Grand Prix medal,” Glenn told the post-event press conference.

Skate America in Norwood (USA) October 21-23 was the first of six events in the ISU Grand Prix of Figure Skating. The series continues next week with Skate Canada International in Mississauga, ON (CAN).