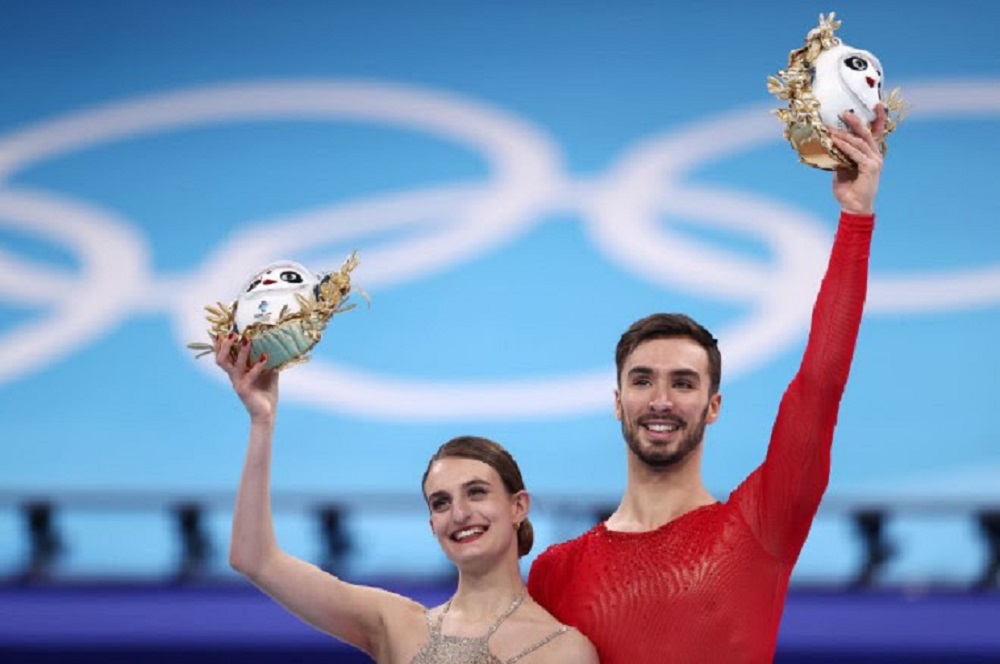 Papadakis/Cizeron (FRA) put out a mesmerizing performance of their dance to “Elegie” by Gabriel Fauré. The 2018 Olympic silver medalists oozed absolute confidence. Intricate footwork and beautiful lifts melted into one with the music and created a moment that united art and sport. The four-time World Champions collected a level four for the straight line lift and curve lift, the twizzles and the dance spin while the one foot and diagonal step sequence as well as the rotational lift merited a level three.

The five-time European Champions had a seasons best of 136.15 points and totaled 226.98 points – a new highest score - for a confident victory, four years after coming second in PyeongChang 2018. They were awarded 26 perfect 10.00 for program components. Papadakis/Cizeron are the second French Olympic Ice Dance Champions in history after Marina Anissina/Gwendal Peizerat who won in 2002.

“It is sinking in, but at the same time I feel like before it sinks in, I need to lie on the floor and cry. I’m trying to take it in very, very slowly,” Papadakis said.

“We never were so stressed, but each second of the program felt perfect,” Cizeron shared. “Above all we wanted to have a good experience here, to have joy and have the Olympic moments that we have been dreaming of. The silver four years ago made us to want the gold medal more than anything else. I think we’ve never worked that hard for a specific goal throughout our career. All the gold medals came one after the other without us really wanting them as a precise goal. This year we gathered the courage actually to want to win. That was a pretty important shift.”

Dancing to Sergei Rachmaninov’s Second Piano Concerto, Sinitsina/Katsalapov (ROC) really shone, skating with ease and making their elements look effortless. The 2021 ISU World Champions picked up a level four for five elements and a level three two elements to set a personal best of 131.66 points. They racked up 220.51 points overall. Katsalapov returned on to the Olympic podium after eight years. He had won bronze in Sochi 2014 with his former partner Elena Ilinykh (RUS) and became the first Ice Dancer to win Olympic medals with two different partners.

“It was for sure the best Free Dance of the season. We went out fearless, we attacked our program. Obviously, we came here to fight for the highest placement, but it was a fair competition and we are pleased with our result. This time it is silver, next time maybe gold,” Katsalapov said.

“It is very hard to put my emotions into words right now. After the warm-up, I was so focused and so inspired that I had no other thoughts. I looked into Nikita’s eyes and I felt the confidence and the support and all other thoughts went away,” Sinitsina commented.

Hubbell/Donohue (USA) were at their best as well, delivering a soft yet powerful performance to “Drowning” that featured a level four for elements. They received a deduction for their combination lift that was too long. The three-time ISU World medalists achieved a personal best of 130.89 points which added up to 218.02 points.

“We are pleased with the performance,” Hubbell commented. “We didn’t feel like we left anything undone. We’re extremely proud, grateful and really excited to stand on the medal stand tonight. It's such a privilege to be here. That's something that we've worked on a lot, we see this as a privilege. When I finished, I just was grateful for being here. Once we've skated, that's not our job. So it was just a moment I think for both of us to say goodbye to Olympic ice, and thank this journey that's created the people that we are today,” she explained when asked why she kissed the ice on her way out.

“Standing on an Olympic podium is absolutely a mix of pride, joy, elation, relief, and all the stress that's been building up for an entire season,” Donohue said.

Two-time ISU Four Continents Champions Madison Chock/Evan Bates (USA) came fourth with an innovative dance telling the story of an astronaut that meets an alien. They scored 214.77 points. “Right now I think all the adrenaline is leaving my body. I'm starting to feel drained and tired, but it was so exhilarating to perform today and to finish our Olympic experience off with that performance. And I'm just really proud of Evan and how we trusted ourselves and did the work,” Chock told the press. “We're very pleased with that (this Free Dance). And to go home knowing that we did two solid performances is a good feeling.”

2022 ISU European bronze medalists Charlene Guignard/Marco Fabbri (ITA) moved up from seventh to fifth with their emotional dance to “Atonement” and “Little Sparrow” on 207.05 points. “It was not a perfect performance. We could have done some things a little bit better, but we're still very proud about our performance,” Fabbri noted. “It's hard for us now to say (whether) we will continue until the next Olympic Games, but having an Olympic Games in Milan, Italy, which is my home town, and where Charlene has been living for more than 10 years, is inviting. It will be something that will push us and make us reflect a lot more."

“For me, Ice Dance has that particularity that it really is on the edge of being a sport and being an art. It just lies perfectly in between. I think the sport thanks to all these amazing Skaters is evolving really well. It is incredible to watch the skills of every Skater at this event,” Cizeron pointed out.