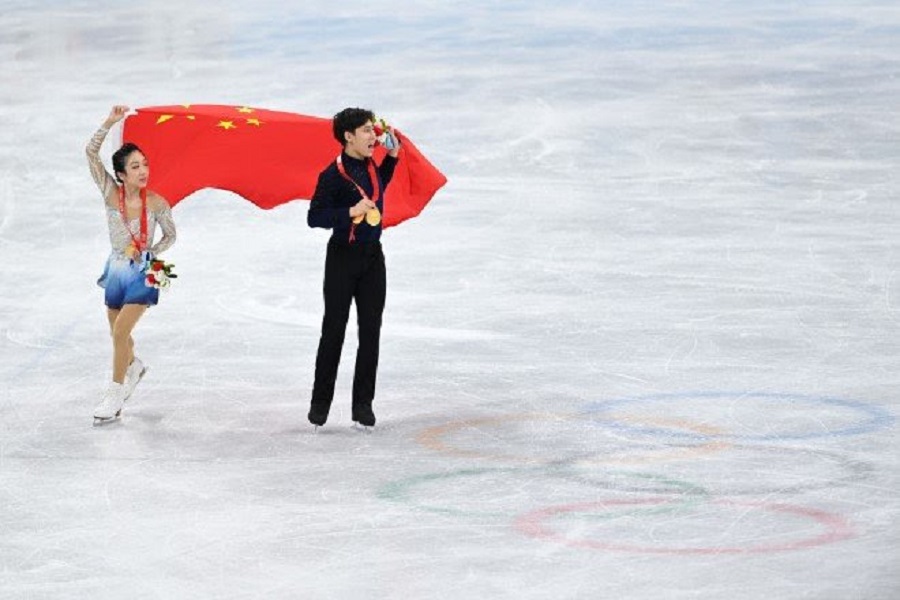 Sui/Han (CHN) dazzled in their program to “Bridge Over Troubled Water”, opening with a quad twist and completing a triple toe-double toe-double toe, big throw triple flip and Salchow as well as level-four lifts, spin and death spiral. The only glitch came when Sui landed forward on the triple Salchow that was downgraded. The 2018 Olympic silver medalists scored a seasons best with 155.47 points and racked up 239.88 points, setting a new highest total score. Sui/Han became the second Chinese Figure Skaters to win the Olympic gold twelve years after their coach Hongbo Zhao and his partner Xue Shen won in Vancouver.

“Our dream came true in Beijing after four years. First of all, we want to thank our country. And we want to thank many people who helped us along the way. I want to thank Wenjing, and our team for their support. Like our program today, we helped each other. We want to give power to everyone. We hope everyone can overcome the negatives and help each other in this pandemic. We are really grateful,” Han commented.

“It (the key to our success) is our perseverance,” Sui shared. “We suffered from a lot of injuries since we started. We were told we are not made for Pair Skating. There is no road for us ahead, but we paved a road for ourselves. Trying more difficult elements is an embodiment of the Olympic spirit, and so is perseverance.”

Tarasova/Morozov (ROC) turned in a beautiful performance to “Lighthouse” by Patrick Watson. The two-time ISU World silver medalists landed a triple twist, side by side triple Salchow, triple toe-double toe-double toe as well as a throw triple flip and Salchow to score a personal best of 155.00 points. Overall they accumulated 239.25 points, just 0.63 points behind Sui/Han. Four years ago in PyeongChang, the Muscovites had slipped from second to fourth place in the Free Skating.

„All here are happy with their medal. In Figure Skating, an Olympic medal is the high of your career and so it means a lot to us,” Morozov noted. “The past four years we have worked only for this moment and for this medal. When we ended our program, we were happy that it was over and we skated clean, did all elements with level four. It was difficult because these were the Olympic Games and it is very important to skate clean.”

Mishina/Galliamov’s (ROC) excellent program to “The Snowstorm” and “Time, Forward” was highlighted by a triple Salchow-Euler-triple Salchow combination, a triple toe, high triple throws and difficult lifts. The 2021 ISU World Champions netted 154.95 points which added up to 237.71 points overall to claim the bronze in their Olympic debut.

“We only watched the competition when sitting in the green room. The first and second placed Pairs were amazing. That's a great competition and we are grateful we can compete with such legendary athletes. For them these weren’t the first Olympics and we are glad we had the honor to compete with them,” Galliamov said.

“We made every effort to prepare ourselves for these Olympic Games. The result is not as expected. Today we did not get the medal, which might be one of the most important medals in our life, so we were disappointed,” Kozlovskii said.

ROC was the most successful NOC in the Figure Skating competitions at the Beijing 2022 Olympic Winter Games with five medals in the individual competitions – one gold, three silver, one bronze. Japan takes home three medals (one silver, two bronze) while the USA earned one gold and one bronze. China and France got one gold each. ROC won the Team Event ahead of the USA and Japan, but the medals were not awarded due to the ongoing investigation in the Kamila Valieva* (ROC) case.