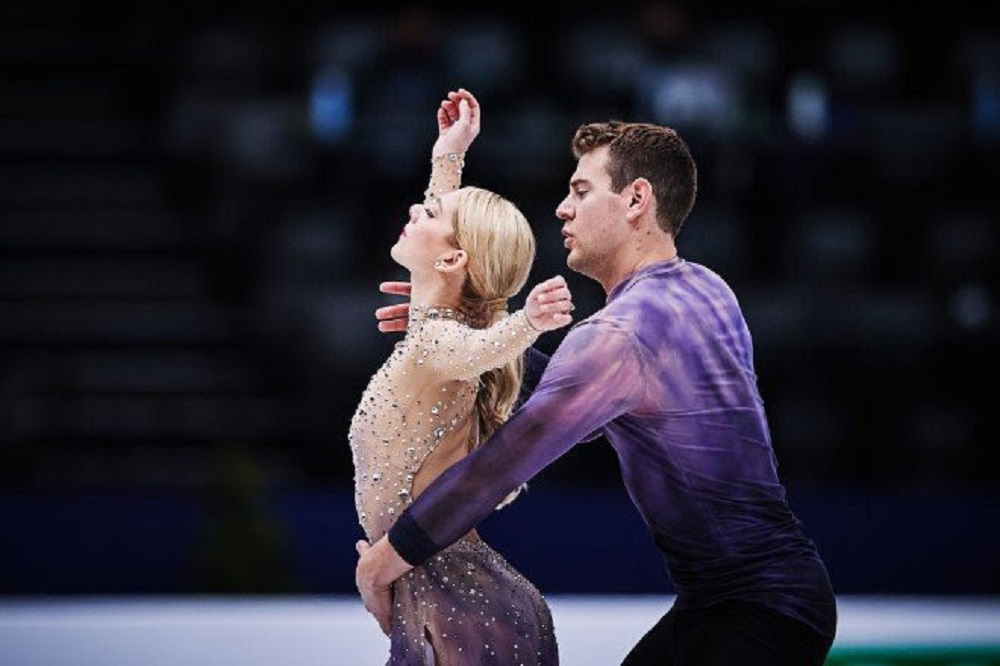 Two-time Olympic medalist Shoma Uno led the Japanese Men to a sweep of the Men’s Short Program. 2022 Olympic silver medalist Yuma Kagiyama and Kazuki Tomono follow in second and third. All three Men set a new personal best for themselves in what was a high-level competition.

Uno opened his stylish program to two Oboe concertos with a quadruple flip and followed up with a quadruple toeloop-triple toeloop, triple Axel and level four spins and footwork. The 2022 Olympic bronze medalist scored 109.63 points.

“I could pull of my performance exactly as I always do in practice. It is a really difficult thing to put all the power I have in my training into the competition, so I'm glad it worked out,” the two-time World silver medalist told the press. “My free skating is full of difficult jumps like the quad loop and Salchow. Of course the jumps are important as well, but also the other elements are significant. It was choreographed by my coach Stephane Lambiel, so I really want to make the best out of it to make him proud,” he continued.

Performing to “Smile”, Kagiyama nailed a quadruple Salchow, quadruple toeloop-triple toelooop but the triple Axel was shaky. The reigning ISU World silver medalist picked up a level four for his spins and steps to earn 105.69 points.

“My triple Axel was a little bit cautious and I couldn't perform as good as during my practice, but the two quads were like the best ever, so I'm very happy about that,” the 18-year-old commented. “Unlike the Olympics, I was a bit nervous, but looking around the stadium, I saw many Japanese flags and I was so happy to be the focus of attention and got geared up to show my best.”

Tomono’s program to “Cinema Paradiso” was highlighted by a quad toe-triple toe, quad Salchow and triple Axel. The 2022 Four Continents silver medalist, who had come in as a last minute replacement for Kao Miura, broke the 100-points barrier for the first time in his career with 101.12 points.

“When I first heard the news about competing at Worlds, I was very surprised, but I immediately agreed to participate, so I changed gears and was able to focus on preparing for this competition,” the 23-year-old shared. ”After the Grand Prix in Russia, I was really aiming for more than 100 points, so 101 is great. I thought that if I could do my best, I knew I could go over 100,” he added.

There were many more excellent performances and personal best scores. Newcomer Ilia Malinin (USA) made a splash in his World debut, landing a quad Lutz and quad toe-triple toe to place fourth (100.16 points).

“So many emotions I can’t even explain it – it was so much gratitude, fulfillment, excitement, disbelief - it was magical! In the moment, it was living a dream that Brandon and I always sought after but never knew it would actually be possible and we want to live in this moment for a long time,” Knierim shared.

“I couldn’t have asked for a better way to end the season. For Alexa and I this was such a personal journey since we teamed up. For us to finish the season on this kind of program, that means so much to us. I’ve dreamed about this moment so many times but this (reality) is even better,” Frazier noted.

Skating to “Woman” by Shawn Philips, Miura/Kihara produced a triple twist, throw triple Lutz and difficult lifts. However, Miura struggled with the solo jumps and fell on the throw triple loop. The two-time ISU Grand Prix medalists earned 127.97 points and were ranked third in the segment like in the Short Program, but overall moved up to second place at 199.55 points. Their medal is the first World Pair Skating medal for Japan in ten years when Narumi Takahashi/Mervin Tran had won bronze in 2012.

“Now we secure the medal but I don’t think our performance isn’t worth winning a medal today. We regret our performance today so next season I want to push ourselves hard and to the very end and we want to practice hard,” Miura commented. “I’m happy (with this first medal in ten years) and hope the next generation will find interest and want to challenge the pairs discipline,” Kihara added.

James/Radford’s program to “Falling” by Harry Styles and “Maselstrom” by Karl Hugo included a triple Salchow, triple twist, throw triple flip and two level-four lifts. The only glitch was a messy triple toe-double toe-double toe combination. The Canadians were second in the Free Skating with 130.78 points and pulled up from fifth to third at 197.32 points and won the bronze in their first season as a team. They both have been on the World podium before with different partners: Radford is a two-time World Champion with Meagan Duhamel while James won World bronze in 2018 with Morgan Ciprès.

“It feels like everything is coming together just when we needed to. We fought till the end, we didn’t just fight we didn’t just think of the elements, we really performed and we really felt comfortable on the ice, it felt at home,” James shared.

“I look back on this year as one of the best years of my life it was one of the most incredible journeys and experiences that I’ve had thus far in my life and I’m so in gratitude,” Radford noted. “I’m 37 years old and after everything that I accomplished in my career to come back and experience in this sport and experience in a totally different and amazing way I have to thank Vanessa, I just can’t thank her enough for giving me this opportunity for this experience.”

The up and coming team of Karina Safina/Luka Berulava (GEO) placed fourth in their World debut on 191.74 points. Minerva Fabienne Hase/Nolan Seegert (GER) finished fifth with another strong performance on 189.61 points while Evelyn Walsh/Trennt Michaud (CAN) came sixth (176.02 points).

Ashley Cain-Gribble/Timothy LeDuc (USA), who stood in second following the Short Program had to withdrew during the Free Skating as Cain-Gribble suffered an injury during the performance when she fell on a triple Salchow.