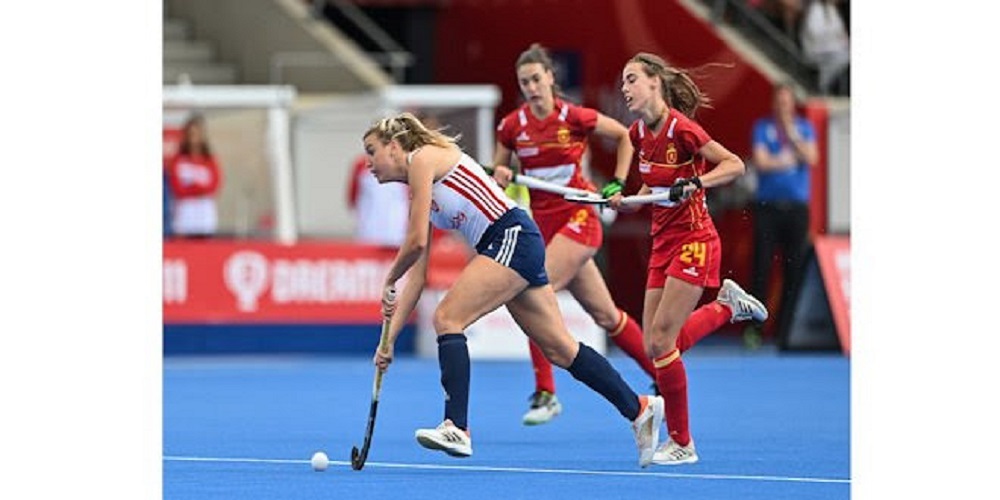 Spain's women took all three points thanks to a very resilient performance and a brilliant display from goalkeeper Melanie Garcia.

Xantal Gine opened the scoring in the twentieth minute with an excellent penalty corner, and although England pushed from then on, they found Garcia in excellent form between the posts. And when England removed the returning Maddie Hinch for the final minutes to play with eleven outfield players, Spain broke away to score a second through Marta Segu.

Having won on Saturday, England's women were disappointed not to earn another positive result, but they pushed hard to get back in the game. Next up at Lee Valley Hockey and Tennis Centre are the Dutch for a fantastic two days of action on 4 and 5 June.

The most notable chance of the first quarter saw Lily Owsley dart into the D very well, only to be repelled by the Spanish backline.

Into the second period, Spain began to get more of a foothold in the match, firstly being denied by a smart block before a penalty corner went just wide of the upright. Soon though they did have the advantage as Xantal Gine scored with her second corner in two days.

After the restart England looked to up the tempo, Martha Taylor almost being played in but the ball not quite running for her. Darcy Bourne's backhand shot lacked power, then she and Alex Malzer fashioned a corner but Grace Balsdon's effort was saved well.

Still in the third quarter and Garcia made another two saves, firstly from Balsdon and then Hannah Martin's rebound.

England continued to push in the fourth quarter and Taylor almost had a great chance but it just ran away from her when free in the D. In the final minutes England went to eleven outfield players, but sadly the plan went against them as Marta Segu scored into an empty net on the counter.

So Spain took all three points thanks to a resilient display, and now England look to next week's matches with the Netherlands.