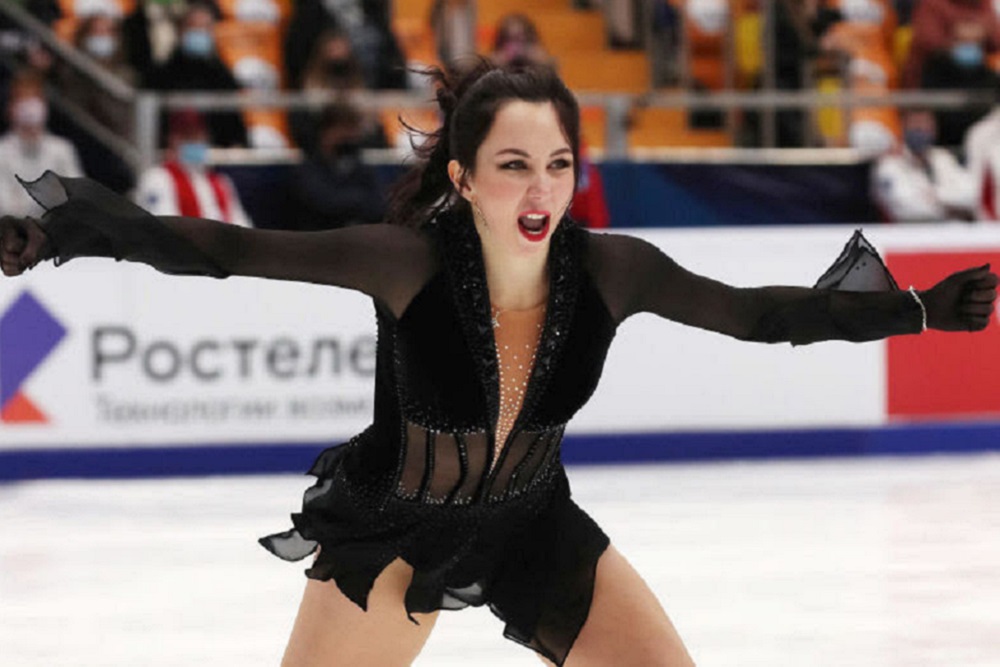 Following a decision of the ISU Council due to the ongoing Covid-19 pandemic and travel restrictions, the Grand Prix events are primarily domestically run events with domestic skaters and skaters who train in the host country or respective geographical region competing. Overall, 57 skaters/couples that represent nine ISU members competed at the Rostelecom Cup.

Russia’s Mikhail Kolyada celebrated a golden comeback, taking the second Grand Prix title of his career after missing the past season due to health issues. Morisi Kvitelashvili of Georgia claimed his second Grand Prix silver medal, while Petr Gumennik of Russia earned the bronze on his senior Grand Prix debut.

Performing to “Nureyev” from the movie “The White Crow” about the famous Russian ballet dancer, Kolyada nailed a quad toe-triple toe and followed up with a quad toe. He landed four more triples including two Axels as well as two level-four spins and level-four footwork. The only glitch in his spectacular performance was a popped Axel. The 2018 World bronze medalist scored 188.55 points and racked up 281.99 points overall.

“Coming back is always hard,” 25-year-old Kolyada said. “It was hard this time, but also nice. I want to thank everyone for their support.

“I knew basically everything about (Rudolf) Nureyev. When I visited the ballet museum and met (Russian-Georgian ballet dancer) Nikolai Maximovitch Tsiskaridze, he told me about Nureyev’s life, some stories and showed me the costumes. So I know what I am skating. However, I have my own idea of the program that I want to bring across to the audience.”

Kvitelashvili put out a strong performance to “Tosca”, reeling off a quad Salchow-double toe, quad toe-double toe, triple Axel as well as four more triples and two level-four spins. However, he fell on a quad toe. The 2020 ISU European bronze medalist was ranked fourth in the Free Skating with 176.24 points and slipped from first to second.

“I am happy how everything came together, even though not everything worked in the free skating,” the 25-year-old Georgian said. “I skated much better in the short program. I want to continue to work to improve and to achieve better results in the next competitions.”

Gumennik’s dramatic performance to “The Phantom of the Opera” was highlighted by a quad Salchow-double toe-double toe, a triple Axel-triple toe and a triple Lutz-triple loop combination, but he missed his second quad Salchow and fell on a connecting step. The 2020 ISU World Junior bronze medalist was sixth in the Free Skating with 172.21 points but held on to the bronze medal with 268.47 points.

“I am happy to have won a medal at my first (international) senior competition, but I am a bit sad that my program wasn’t that great,” the 18-year-old said. “But I am not too upset about it and I’m sure I will not repeat these mistakes as I have been consistent in practice.”

Sinitsina/Katsalapov debuted their new Free Dance to “Smile” and “Come Together” in front of a crowd and started strongly with excellent twizzles, spectacular curve lift and stationary lift. The 2019 World silver medalists went on to produce a smooth serpentine step sequence and combination spin, collecting a level four for them as well as for the twizzles and the first two lifts.

However, the Russian Champions struggled with the rotational lift that was rated only a level one. Sinitsina/Katsalapov scored 126.38 points for their Free Dance for a total score 217.51.
“It was our first full competition and full run-through of the free dance and we really felt the support of the crowd,” Sinitsina said. “Unfortunately, we made an error on the lift. We hope to improve and to skate without mistakes next time.”

Zagorski/Guerreiro put out a powerful performance to “I’m a Survivor”, completing innovative lifts and intricate footwork. The National bronze medalists picked up a level four for their lifts, the spin, and the one foot step sequence for a Free Dance score of 122.45 points. Overall the 2018 Olympians accumulated 206.91 points.

“It is our third Grand Prix medal, but we’d never got a medal at our home Grand Prix in Moscow,” Guerreiro said. “We think we gave two good performances. We feel like it is a breakthrough for us to show the program the way it is supposed to be.”

“For us it is very important and exciting, because this is our first (senior) Grand Prix medal,” Skoptcova said. “Obviously the Grand Prix format is different this year, but nevertheless there were strong couples competing and they were not only from Russia.”

The new team of Elizaveta Khudaiberdieva/Egor Bazin (RUS) moved up from fifth to fourth with an interesting dance that tells the story of an old couple looking back at their lives (193.18 points). Annabelle Morozov/Andrei Bagin (RUS) placed fifth with a smooth performance to “Terra Rossa” on 191.00 points, while Alexandra Nazarova/Maxim Nikitin (UKR) remained in sixth place at 188.25 points.

Boikova/Kozlovskii (RUS) double up on their Pairs title

Boikova/Kozlovskii were spectacular in their “James Bond” routine, producing a side by side triple Salchow, triple toe-double toe-double toe combination, triple twist and throw triple loop. The Russian Champions collected a level four for their difficult lifts, pair combination spin and the twist to score 154.27 points. They totaled 232.56 points.

Boikova said: “You can always add emotions, improve the quality of the elements. While this was not the absolute best we can do, it was certainly a very good performance today.”

Skating to “Bohemian Rhapsody”, Mishina/Galliamov landed a triple twist, side by side triple toe, throw triple Lutz and loop. Their only mistake came on their triple Salchow-Euler-triple Salchow combination and it was costly as Mishina singled the second jump. The 2019 ISU World Junior Champions’ 146.46 points meant they slipped to second on 225.80 points overall.

“Even a bad experience is an experience,” Mishina said. “Maybe we wanted to skate clean too much – not for the result, but for ourselves and to be pleased with ourselves. We were confident in our abilities and were in a good shape, but something did not go right.”

Panfilova/Rylov’s performance to “The Third Person” soundtrack featured impressive throws and lifts as well as a double Axel-Euler-double Salchow combination. But Panfilova fell on the triple Salchow while he doubled. The reigning ISU World Junior Champions received 136.23 points and remained in third place on 210.07 points.

“We are pleased with third place here and with the fact that we were able to pull ourselves together after the failed jump,” Panfilova said. “We were nervous, because the practice didn’t go that well. Nevertheless, I think we made a step forward.”

Russia’s 2015 World Champion Elizaveta Tuktamysheva, nicknamed “The Empress” by her fans, reigned supreme in the Ladies Free Skating at the ISU Grand Prix of Figure Skating Rostelecom Cup Saturday in Moscow to take the title in a thrilling final. Current ISU European Champion Alena Kostornaia (RUS) had to settle for the silver medal this time while Anastasiia Guliakova (RUS) captured the bronze on her Grand Prix debut.

Tuktamysheva, who stood in second place following the Short Program, nailed a triple Axel-double toe right out of the gate in her Japanese-style program “Chronicles of a Mischievous Bird”.

She stepped out of her second triple Axel, but it was smooth sailing after that as she ticked off her jumps: triple Lutz, triple flip, double Axel-triple toe-double toe, a triple Lutz-Euler-double Axel and triple loop.

The 23-year-old from St. Petersburg picked up a level four for two spins and a level three for the footwork and the layback spin to rack up 148.69 points. With a total of 223.39 points, she displaced overnight leader Kostornaia and claimed the fifth Grand Prix gold medal of her career.

“I was not confident of victory as the competition was very strong,” Tuktamysheva said. “It was a nice surprise and a nice ending to this Grand Prix.

“It was a great atmosphere and great support and I did not want the program to go downhill. The music keeps building and it is such a rare chance now to perform in front of an audience. I fed off the energy of the crowd and I gave energy back.”

Kostornaia delivered an inspiring performance to “Romeo and Juliet” and “W.E.” by Abel Korzeniowski that was highlighted by four clean triples and beautiful spins. However, three triples were slightly underrotated and she lost points in her step sequence and a combination spin that garnered only a level two.

“I knew that Lisa (Tuktamysheva) had skated very well as I watched her while I was waiting at the boards for my turn,” 17-year-old Kostornaia said. “I just went out to do my job, but not everything worked out. Obviously you need jumps like the triple Axel and quads to compete at the highest level so it is in my plans and I’m working towards that.”

Skating to “Don’t Say You Do” and “Real Boy” by Lola Blanc, Guliakova produced a clean triple flip, triple Lutz and loop as well as innovative spins that merited a level four. But she also underrotated a few jumps. The 18-year-old scored 128.96 points and pulled up a place into third on 199.03 points.

“It was my first Grand Prix and I am happy that I was able to give two decent performances,” Guliakova said. “There still were some errors and we’ll keep working on that. When I saw my score I did not think it would be enough to be on the podium so I am very happy now.”

“Quad queen” and defending Rostelecom Champion Alexandra Trusova (RUS) had an off day and missed her quads to drop from third to fourth on 198.93 points. Elizaveta Nugumanova (RUS) finished fifth on 191.52 points while Eva-Lotta Kiibus (EST) came sixth (186.00 points).