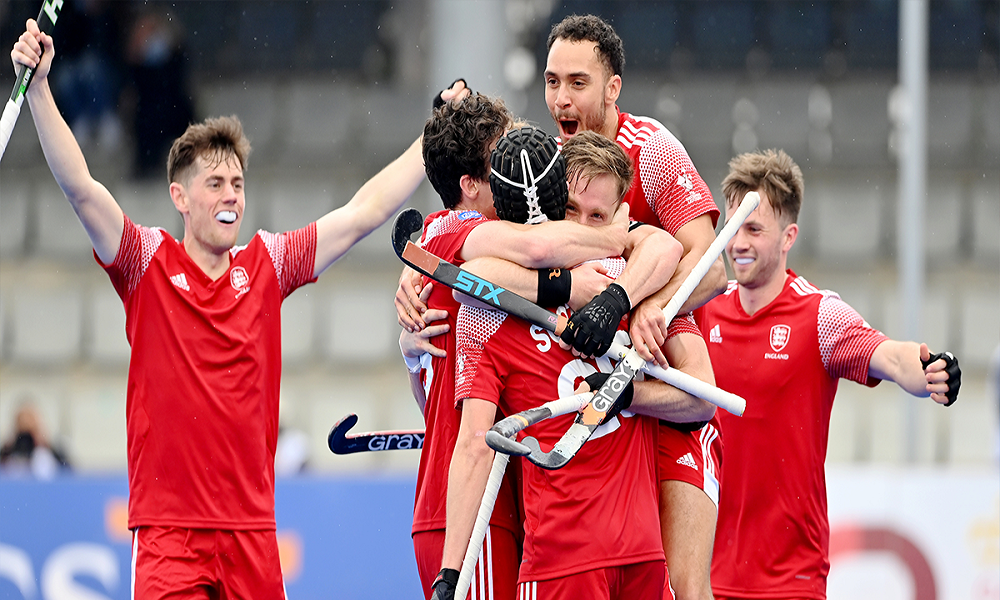 David Goodfield scored with just nine seconds remaining to give England a second successive win over Spain in the FIH Hockey Pro League.

The midfielder was in the perfect place to turn the ball home for his second goal in as many days to seal the victory in the dying moments.

That was the third time England had led in the match, with Nick Bandurak scoring his first international goal and Duncan Scott finding the net once again.

Antonio Sanz and Xavier Gispert had both levelled for Spain but they were made to rue a number of missed opportunities and saves by Ollie Payne, while defender Sam Taylor impressed on his international debut.

The hosts began on the front foot, determined to gain revenge after yesterday’s result, as Jordi Bonastre forced Payne into a save in just the second minute. The goalkeeper was called into action again in the 11th minute, shortly after Peter Scott picked another effort from off his goalkeeper's toes.

Against the run of play, England opened the scoring in the 23rd minute as Holcombe forward Bandurak turned the ball into the goal for his first international strike after initial efforts from him and James Oates were saved.

Tom Sorsby produced a spectacular goal-line save a minute later but Spain were level shortly after as a deflected shot fell kindly for Sanz in the circle to lift over Payne.

England were more positive at the start of the third quarter and deserved to take the lead in the 35th minute through a moment of quality. Yesterday’s Player of the Match David Condon did well to trap a bouncing ball at the top of the circle, roll a defender and fire a pass across the circle which Duncan Scott swept home for his second goal in as many days.

Both teams saw penalty corner efforts saved in the final quarter before a long aerial ball was collected by Gispert, who picked his corner and slammed it beyond Payne.

With just moments remaining, England won a corner. Both the initial flick and the first rebound effort were saved but the ball landed beautifully for Goodfield who lifted it over Spanish goalkeeper Adrian Rafi to secure a full haul of points from his side’s trip to Valencia.

It was such an amazing feeling and one that I’ll never forget," Bandurak said after scoring his first goal. "The boys have all been incredible with settling in the debutants on this trip and to have them all there to celebrate with me, along with my wife and family on the side, was really special.

"It’s been a fantastic opportunity for us to test ourselves in a competitive environment and to come away with six points is a huge testament to the hard work that the group has put in together. The two games were very different so to show the capability to win in two very different styles of play is a promising building block for the rest of the competition.

David Ames, who captained the team today, added: "This finishes our weekend very positively. Two wins away in Valencia is very special, especially for our new caps. So I'm delighted for the whole squad and particularly those guys who've made their debuts this weekend.

"I think today we knew we were going to have to be better than what we were yesterday, fair play Spain played really well. We were a bit scrappy at times but it shows the character we've got this early in the cycle that we can fight and compete to the end. It was nice to get the three points in the way that we did."

England’s men and women return to action when they face Argentina in the FIH Hockey Pro League on 19-20 February.