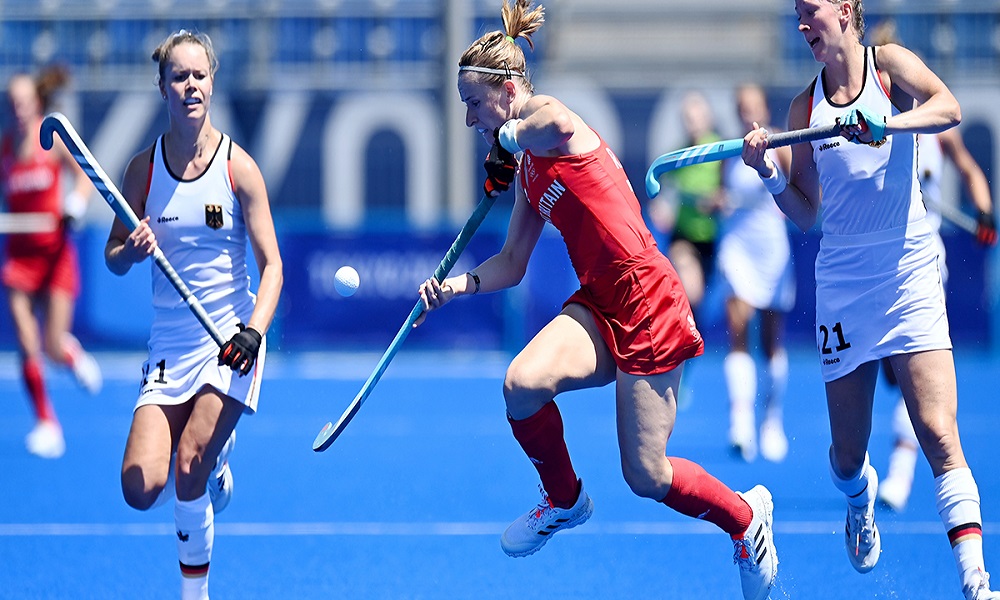 Great Britain’s women suffered a narrow defeat in an entertaining opening game at the Tokyo 2020 Olympics.

Mark Hager’s team peppered the German goal throughout the game but came up against an inspired goalkeeper in Julia Sonntag, who made several important saves.

Sarah Jones opened the scoring for Great Britain towards the end of the first quarter, turning home a deflected corner to hand her side a well earned lead.

But a penalty stroke from Viktoria Huse drew the Germans level at half-time before Charlotte Stapenhorst converted a blistering counter attack with a goal that would prove crucial.

The reigning Olympic champions started as they left off five years ago with Shona McCallin having the game’s first shot after just 19 seconds, before two Giselle Ansley corners and their follow up efforts were blocked by the German defence

Sonntag was on hand to stop Ellie Rayer’s close range effort in the 11th minute before Jones opened the scoring two minutes later, finding herself perfectly positioned to nudge the ball into the goal after another corner was deflected

Germany put together a dangerous counter attack early in the second quarter but Leah Wilkinson read the final pass expertly to turn the ball away from danger before shortly after at the other end, Sonntag was called into action to pad away Izzy Petter’s deflection.

Maddie Hinch was then forced into a smart save in the 22nd minute but she couldn’t keep out Huse’s penalty stroke shortly after as the German player sent her the wrong way.

There was nothing Hinch could do to stop Germany’s second goal either as Stapenhorst found the target from close range after another stunning counter. Moments after Sonntag saved from Hannah Martin, Pia Maertens raced up the right-hand side of the pitch before crossing for the forward to tap home.

Both teams had one more chance apiece in the third quarter, Hinch reacting smartly to her right to stop the German effort before Ansley’s flick – which looked destined for the top corner – was brilliantly blocked on the line.

Three more corners in quick succession early in the final quarter couldn’t breach the German defence either, with the first two striking feet before Ansley’s flick was saved by Sonntag.

After the match, captain Hollie Pearne-Webb commented: “I think we’re going to go back tonight, look at the stats and I think that’ll show that it was a really dominant performance from us. In one way that’s disappointing because on the balance of play the three points should have been ours, however, it’s also disappointing as we didn’t make sure it was three points and I think the difference was just in both circles. I think we’ll look at the stats and see that they didn’t have many opportunities, I think they had one corner, one stroke, and not many shots. We had numerous corners, but that’s the difference in hockey at both ends. We need to go back and tighten up those areas. Overall, I think it was really positive.

“There was a danger that with a very new group we could come out here and be a bit nervous, but I don’t think we started like that. I think we started confidently and had them on the back foot with the momentum in our favour, so it was a really pleasing start. Now we’re in the tournament, game one is out of the way, and we’ve got South Africa coming up tomorrow, so we need to take the confidence we showed today and take it into that match.

“Obviously we look back at Rio with what we did and take learnings from that, but equally this is a very different squad with lots of new players, a new coach and a different style of play, so we very much see ourselves as a new squad looking to win our first gold medal together. We’ll take some confidence from what happened five years ago, but we want to create our own history here. I am really pleased with how we started the game, we played some really good hockey in patches and it’s just about tweaking those final things and I think we would have had three points.”

GB’s women return to action against South Africa at 10:30 on Monday 26 July, with the men playing Canada earlier that day at 03:45.