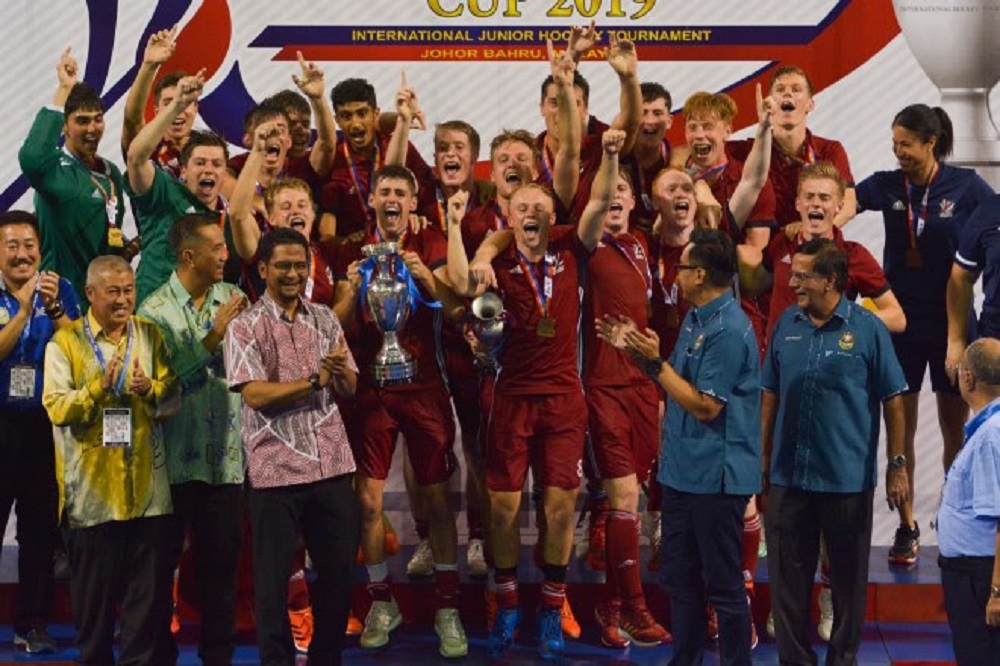 Great Britain’s U21s men were crowned 2019 Sultan of Johor Cup victors with an enthralling 2-1 victory over India as Stuart Rushmere bagged a brilliant brace, scoring the winning goal coming in the final minute.

After the fireworks from Friday’s thrilling 3-3 draw between these two sides, the final was largely a much more contained match as the teams looked resolute in defence, with the score remaining goalless until the final quarter.

The game roared into life in the last 15 minutes as Rushmere struck, notching the winning goal with three seconds left on the clock to make it back to back Sultan of Johor Cup gold medals for the team.

India started the game brightly with Maninder Singh coming close on a solo run as his looping reverse stick hit the crossbar.

Sudeep Chirmako also looking dangerous during the opening-quarter with James Mazarelo making a good save to prevent India from taking an early lead.

Mazarelo was again called into action minutes later, making a superb save to deny India from the first penalty corner of the match to keep the game goalless after 15 minutes.

India began the second quarter with consecutive penalty corners but were unable to make the most of the opportunity as Great Britain stood firm in defence with Oliver Payne on hand to deny the opposition.

Two sensational saves from Payne in quick succession kept India out when shooting from close range before GB broke forward on the counter attack and posed questions of their own.

GB came within inches of taking the lead, Rohan Bhuhi pouncing on a loose ball in the circle but firing just wide as the opening-half finished goalless.

More good work from Mazarelo in goal kept India out, this time using his stick to block and sweep the ball clear of the circle before stopping Maninder Singh’s drag flick from a penalty corner.

India earned two penalty corners shortly into the fourth quarter and eventually were able to make their chances count with Gursahibijt Singh stroking the ball into the backboard to take the lead with just over ten minutes remaining.

Great Britain weren’t behind for long though, having won a penalty corner their initial flick was well blocked on the line, but Rushmere was well positioned to tuck the follow up attempt into the back of the net to level the scores.

Daniel West came close from scoring the winning goal but his attempt at deflecting the ball in at the near post went narrowly wide.

The match looked set to be settled by a penalty shootout, but for the heroics of Rushmere. Having peppered the Indian ‘keeper with shots, Rushmere was able to strike the decisive blow with just three seconds left on the clock to put the team 2-1 up and secure the 2019 Sultan of Johor Cup title in dramatic style.