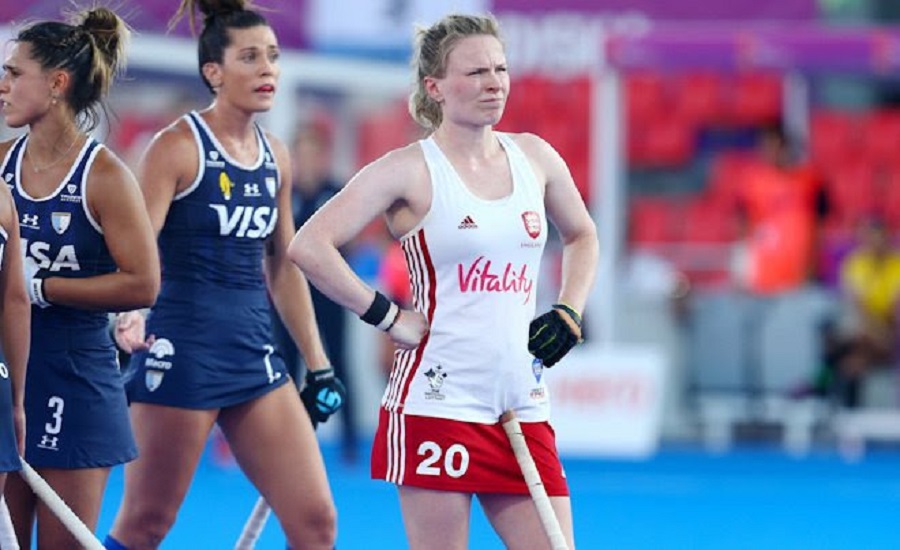 Victoria Granatto’s fourth-quarter goal was enough to send Argentina through in a game that ebbed and flowed in Terrassa.

England pushed hard for an equaliser and Argentina ‘keeper Belen Succi denied Sophie Hamilton with a wonder save in the final minute to send her side through to the semi-finals.

But England could ultimately not find the breakthrough and bow out of the tournament at the quarter-final stage.

"What makes it hard is that it was so close. Neither team had much in the game. I am so proud; the last time we played Argentina [losing 5-2 twice in February] we were miles off. We have come so far, it's really disappointing after such a close game but I am so proud of all the girls."

Argentina started the game the better and dominated possession in the opening stages, without truly troubling Maddie Hinch in goal.

An early strike on goal after seven minutes following strong work from Sofia Toccalino was the closest Argentina came in the opening 15, but Hinch was able to bat the ball away.
England struggled to keep hold of the ball at times early in the game, but Argentina failed to make them pay, with Hollie Pearne-Webb leading a stubborn defence from David Ralph’s side.

England came out in the second quarter and showed an immediate improvement, with Holly Hunt entering the circle from an attack down the right but her cross failed to find a red shirt in front of goal.
England showed more intent going forward as both sides hunted for the opener, Darcy Bourne almost catching the Argentina defence on the hop with a steal high up the pitch before a quick break from Las Leonas was extinguished by Pearne-Webb.

Argentina continued to see plenty of the ball despite England’s improved possession, but Hinch remained largely untroubled in the England goal as the sides went in goalless at the break.
The team in dark blue had the better of the early exchanges of the second-half, with a flurry of chances just after the break.

Anna Toman was forced into evasive action to halt an attack down the left before Agustina Albertarrio flashed a shot across goal after being played in by Maria Granatto.

However, England soon grew into the third quarter and had their best period of the match as chances came thick and fast.

Sophie Hamilton curled a shot just wide of the post after cutting in from the right following good play from Tess Howard.

England were suddenly seeing far more of the ball, and were patient in their build up play as they looked to stretch the Argentinian defence. Argentina remained a threat on the break, with Pearne-Webb once more being called into action to deny the lively Albertarrio.
The break perhaps came at the wrong time for England, and Argentina were quicker out of the blocks in the final quarter, with the opening goal coming almost immediately after the restart.

Rocio Sanchez fired a ball into the circle and Granatto got the deftest of touches to give Hinch no chance.

Another chance for Argentina followed in quick succession, with Grace Balsdon penalised with a penalty corner but a low drag was well-defended by Pearne-Webb.

England pushed hard for an equaliser and with just 10 minutes on the clock, Anna Toman fired a dangerous ball across goal but there was no-one in white there to convert.

Argentina were happy to manage the game, taking the ball to the corner with five minutes to go, but England remained steadfast in their search for a leveller.

With edge of the seat excitement as the clock counted down, England’s first chance came as a penalty corner from Giselle Ansley was well-saved by Succi. England attacked again with a trademark run by Lily Owsley down the right wing and in on the goal line. Her pass across the goal found Sophie Hamilton whose close range effort saw Succi again pull off a superb reaction save to deny her right at the death.

It proved the final act of a hard fought and enthralling encounter in Spain, with Argentina progressing to face Germany in the semi-final.