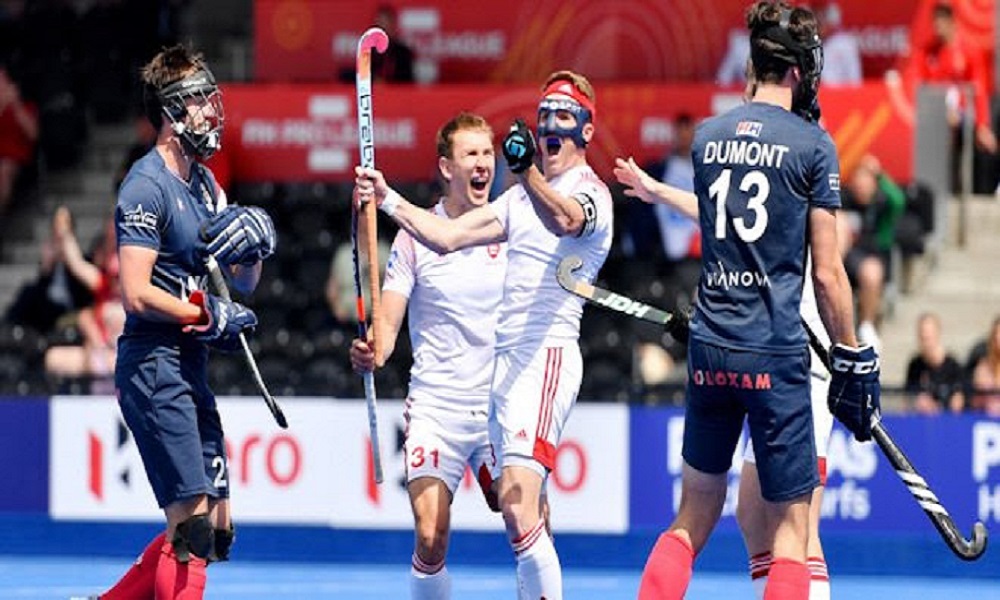 England's men took a super 5-4 win as fans returned to Lee Valley Hockey and Tennis Centre for the first time in more than two and a half years.

It was a fitting way to welcome the return of supporters as both teams put on a quite brilliant show. France came from behind twice to lead 4-3 with less than five minutes to go, but skipper Sam Ward and debutant Matt Ramshaw each scored their second goals of the game to snatch victory.

Ward and Ramshaw both had days to remember; Ward scoring twice on the day he wore the captain's armband for the very first time, while Ramshaw himself got two goals on his international debut. A special mention also goes to player of the match David Goodfield who scored a superb opener with only two minutes gone to get proceedings underway.

Both sides certainly contributed to a brilliant match, with France's Gaspard Baumgarten scoring a great hat-trick for a French side who are on the rise ahead of their home Olympics in 2024. Now the two sides lock horns again on Sunday and hopefully another thriller is in store.

Surbiton's David Goodfield opened the scoring in just the second minute with a quite brilliant hit; cutting in from the right hand side before unleashing a superb strike on the reverse, giving the French 'keeper no chance. Soon enough it was 2-0 with Hampstead & Westminster debutant Matt Ramshaw also scoring on the reverse to evade Corentin Saunier and double the advantage in the first quarter.

Despite being two behind, France certainly did not let their heads drop and skipper Victor Charlet led the charge with an absolute rocket from a penalty corner to give his team a foothold. Then just moments before half time Gaspard Baumgarten scored his side's equaliser with a slightly scrappy rebound.

Into the second half and the action continued apace, Sam Ward rasping home a drag flick just after the restart following a great run by Chris Griffiths to win a corner. Soon afterwards Tom Sorsby showed great hands to work an opportunity but his cross just evaded everyone.

Once again though France showed their mentality and drew level, Corentin Sellier finding Baumgarten for another low finish as he made it 3-3. And again Baumgarten showed excellence inside the D to put his side in front on 47 minutes, reacting superbly after an initial corner had smacked the post.

Having led twice but now trailing, England could have been forgiven for allowing their minds to wander, but as soon as Interim Head Coach Zak Jones went to eleven outfield players, they wrestled the advantage again. Ramshaw got the game's eighth goal from a corner, and crucially Jones decided to stay with eleven outfield instead of reverting to a more cautious approach. And it paid real dividends with 65 seconds left as Ward rifled home a corner.

England gave everything for the three points in a real thriller at Lee Valley Hockey and Tennis Centre, and those fans coming on Sunday will be hoping for another classic encounter.