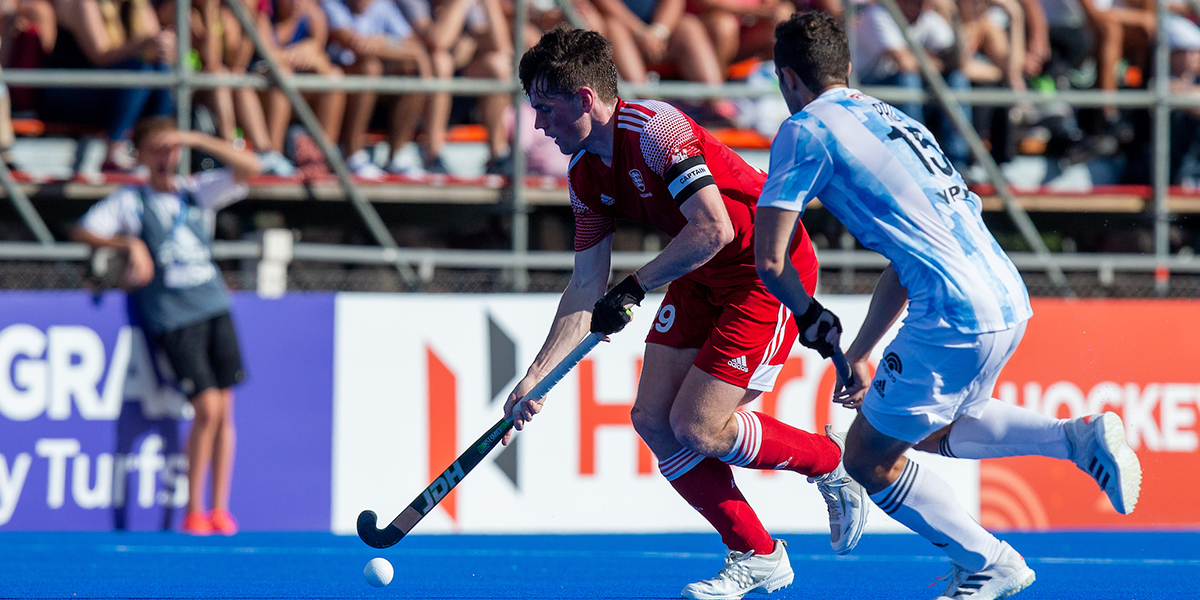 England's men and women both suffered defeats at the hands of Argentina in their first FIH Hockey Pro League double header of the weekend.

Following their pair of victories against Spain earlier this month, the men were hoping to make it three in a row against Argentina but goals from Matias Rey and Federico Monja saw the 2016 Olympic champions emerge 2-0 victors.

Goalkeeper James Mazarelo made his senior international debut in the game alongside Tim Nurse, while Jack Turner played his first games for England since 2017. Tom Sorsby also captained his country for the first time.

In the women's game, Agustina Gorzelany and Julieta Jankunas both scored twice as Las Leonas continued their rich vein of form by easing to victory.

Fresh off an impressive victory over Belgium last weekend, Argentina started in fine fettle as Maico Casella forced Mazarelo into a save at his near post in the opening seconds.

The Loughborough Students goalkeeper could do nothing to keep out Rey’s deflected corner in the fifth minute though as the hosts took the lead.

Martin Ferreiro should have made it two in the final minute of the first quarter but smashed his effort the wrong side of the goal from his perspective before Ward just failed to get on the end of a cross-shot by Peter Scott in the 17th minute.

England saw further chances come and go in the second quarter as Ward and Duncan Scott had efforts blocked as David Goodfield flashed an shot on the spin wide, while at the other end Mazarelo produced a smart save to keep out an Argentinean corner.

After a cagey start to the third quarter, the hosts grew in confidence and saw Liam Sanford charge down two corners before they won another in the dying moments. After England thwarted the initial effort, the ball fell to an Argentine at the top of the circle and his pass was deflected beyond Mazarelo by Monja.

England had opportunities to get themselves on the scoresheet in the final quarter, with Ward seeing another two corners fail to go into the net while Sanford had a shot go wide.

After the game, Turner said: “I think we created a lot of chances that we will want to put away tomorrow. We were disappointed with the goals we gave away. We started a bit slow, it took us a while to get into the game and in general we’re disappointed but this evening we’ll regroup and we’ll go again tomorrow.

“We’ve got a big squad, we’ve got a lot of competition to play in the team so everyone knows they have to play well and it’s great to get some new boys in. Tim played really well in his first game. We’re a big squad and we enjoy playing together.”

England have the chance to exact immediate revenge when they play Argentina again at 19:30 GMT on Sunday 20 February on BT Sport 2, while you can also follow live text updates via our Match Centre.

A team full of confidence having won the Pan Am Cup last month before beating Belgium twice last weekend, Argentina took the lead in the fifth minute as Gorzelany’s corner took a touch off an England stick that wrongfooted goalkeeper Sabbie Heesh.

The Olympic silver medallists doubled their lead eight minutes later as Julieta Jankunas produced a wicked shot from the top of the circle that seemed to take just enough of a deflection to once again beat Heesh.

It could have been three in the 22nd minute as Eugenia Trinchetti hit the post as she slid onto the end of a clever corner routine before England turned the momentum seconds late by winning their first corner of the game. After the first two attempts were kept out but hit Argentinean bodies, Pearne-Webb slapped home the third set piece to get the visitors back in the game.

Maria Granatto turned up the tempo from the off in the second half, forcing a save in the first minute, before both sides enjoyed a flurry of chances. Gorzelany and Rayer both had efforts saved in the 34th minute before in the following 60 seconds Esme Burge and Trinchinetti shot wide for their respective teams.

Thome then produced a fearsome strike from the top of the circle to extend her side’s lead midway through the third quarter before Rayer hit back almost immediately with a neat finish from an acute angle.

Less than a minute after that though Argentina had their fourth, Gorzelany’s flick squeezing agonisingly under Heesh’s body while Giselle Ansley couldn’t react in time on the line.

Jankunas finished the scoring five minutes from the full-time whistle as she tapped home from a couple of metres out after an incredible run by Granatto.

After the game, Pearne-Webb said: “Argentina were obviously very good today. They were a lot more match fit and match ready than what we were.

“This is our first game together as a new group since Tokyo so it’s the first step for us whereas Argentina have had the Pan Am Cup and other FIH Hockey Pro League games. They’re just a little bit ahead of us in terms of their prep.

“I’m disappointed with the result but we’ll look at that and take it forward; it’s just little things we need to tweak I think.”

England’s women return to action against Argentina once again at 22:00 GMT on Sunday 20 February live on BT Sport 1 while you can also follow on our Match Centre.