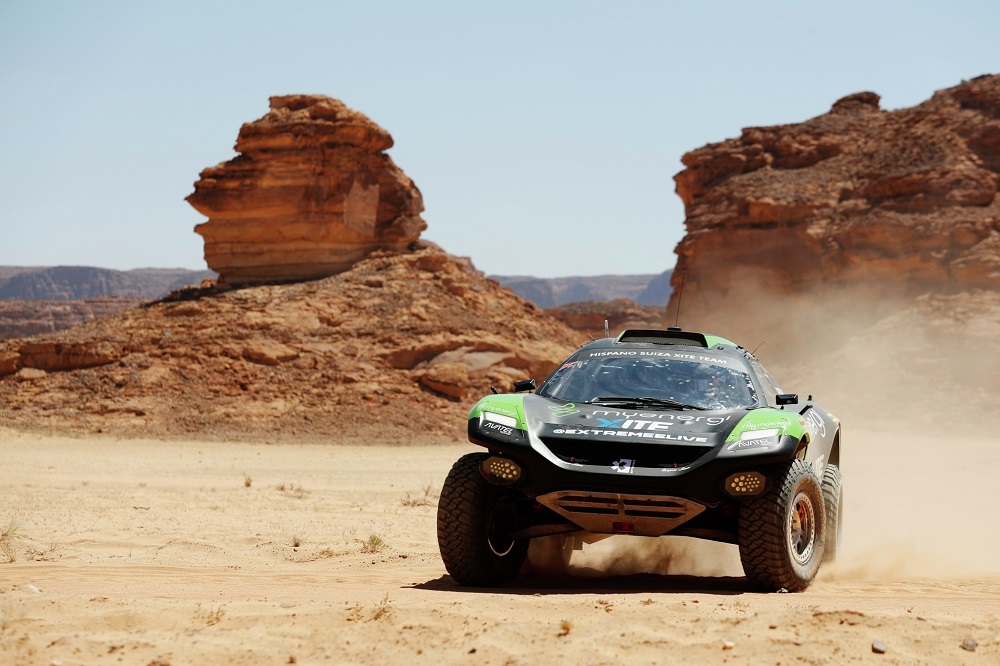 Bennett beats Button in the desert

Extreme E takes the world’s best drivers and ships them to some of the world’s most climatically comprised areas to deliver outstanding sporting entertainment while shining a light on the planet’s plight.

Oli’s Saudi Arabian adventure ended in the semi-final of the event – where he placed second, with only the winner going through to the final race.

“To be in at the start of something like this is a very, very big deal for me,” said Oli. “And to make the top five is great. The semi-final was really intense, having Jenson on the outside of me on the grid was incredible. We got a slightly better line than him through the first corner and we were able to make it stick.

“The dust was horrendous. I was following Timmy [Hansen] into the first corner, it was impossible to see anything. It was like shutting your eyes at 100mph; you just had to back out of the throttle and try to find a different line.

“We have good points on the board and beating a Formula 1 World Champion is a pretty good way to start the season!

Based in northern Saudi Arabia, the opening round of this ground-breaking series drew eyes from around the world with millions of fans tuning in to watch the all-electric off-road racing.

In keeping with the series’ sustainable ethos, all nine specially built Odyssey 21 SUV race cars are powered by a battery charged from a hydrogen fuel cell in the middle of the Arabian desert. Away from the racing, the round one environmental focus was on the impact of climate change on desertification and the Red Sea’s turtle population.

Prior to heading to the race site, Oli and his fellow competitors spent a morning cleaning plastic and rubbish from a turtle nesting site on a beach in Yanbu, south of the desert race site in AlUla. In addition to that, they also worked closely with eminent scientists from around the world to understand the impact of desertification.

All of this resonated with the Extreme E’s most sustainable star.

Oli explained: “At home in Bristol, I run a green energy company (Bee Green Energy) gathering enough wind and solar energy to contribute 100MW to the national grid – and I’m co-founder of XITE ENERGY, a natural energy drink with all the right ingredients like natural caffeine sourced from a coffee bean.

“The work we’re doing with sustainability in Extreme E is right up my street.

“It’s work, but I’m also absolutely fascinated by it. To have the chance to listen to people talking about our impact on the planet and how our work is changing that was fantastic. To then go out and race in surroundings like these was totally mind-blowing.”

Hispano Suiza XITE ENERGY team principal Javier Alonso said: “Firstly, congratulations to Alejandro [Agag, Extreme E CEO] and his team. AlUla was an amazing venue and the setup was amazing, from the command centre to the VIP hospitality and TV broadcast was similarly special.

“And fifth here at the Desert X Prix is a strong result and a good weekend for the whole team.”

The second round of the five-event series takes Oli to Africa’s west coast, for the Ocean X Prix in Lac Rose, Dakar.

The Hispano Suiza XITE ENERGY ODYSSEY 21 is one of nine purpose-built e-SUVs competing in season one of Extreme E. All nine identical cars are built by Spark Racing Technology and incorporate a niobium-reinforced steel alloy tubular frame as well as a bespoke safety cell and roll cage. The battery is produced by Williams Advanced Engineering, while Continental provides the tyres.