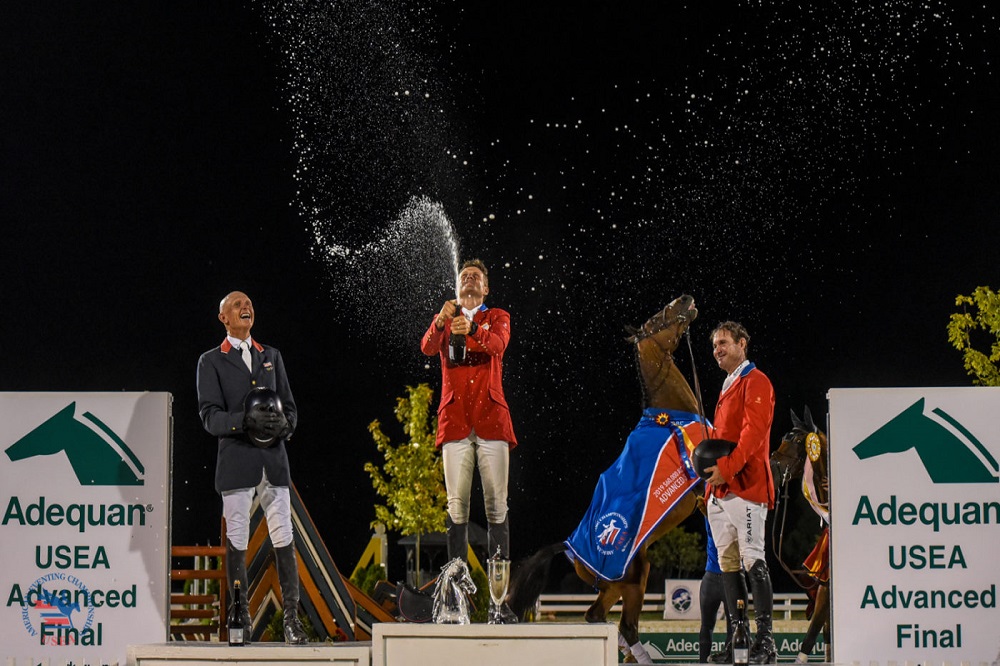 Boyd Martin and Long Island T (Ludwig von Bayern x Haupstsbuch Highlight) had two rails in hand going into the final phase of competition at the 2019 USEA American Eventing Championships (AEC) presented by Nutrena Feeds, but they didn’t need them as they jumped a flawless round over Bobby Murphy’s show jumping course to win the $60,000 Adequan USEA Advanced Final and USEF Advanced Horse Trials National Championship on a score of 32.0.

“He jumped fantastic,” Martin said of the Long Island T Syndicate's 13-year-old Oldenburg/Thoroughbred gelding. “I was a little bit nervous, I’ve never jumped him under lights before. He’s been a little bit suspect in the show jumping early on – I was a bit traumatized from my early days with him, but to his credit, he went in there and jumped like a buck. He really went in there and tried, he wasn’t spooky, and I couldn’t be more happy with the horse. He’s given me everything he’s got this weekend.”

“Ludwig” has had a bit of a light season, and Martin explained that he wrenched his leg during a cross-country school just weeks before the Land Rover Kentucky Three-Day Event. “Maybe it was a blessing in disguises because he would have been a fraction green at Kentucky and I think by the time we get him to Land Rover next year he’ll be a veteran. In the back of my mind too I think he has a chance at the Olympics next year and it’s a bit of a wise man’s game. I think it’s important not to thrash your horse too hard the year before because you want them raring to go in 2020.”

“To come to a special venue like this with some of the younger horses is a privilege. With one of the best course designers in the world, Derek di Grazia, you get a good, strong, fair track. Obviously, I come here to try and win but also prepare the horse for Fair Hill at the end of the year. I felt that this was one of those perfect building events.”

Phillip Dutton and Z (Asca x Bellabouche), the 11-year-old Zangersheide gelding owned by Thomas Tierney, Simon Roosevelt, Suzanne Lacy, Annie Jones, and C. Moran, were the third of four double-clear rounds of the night, holding onto third place on a score of 42.0.

“Z jumped very well,” Dutton acknowledged. “He’s come a little unstuck for a couple of events because I think I was trying a little too hard in the warmup and making him work too much. He just had a nice easy warmup and I got him to peak in the ring. I was really pleased with him.

“It was a good track,” Dutton continued. “It’s always a good education for horses to come into an arena like this, and add to that jumping under the lights it’s pretty unusual for us. It’s all great experience. The distances for us stepped a fraction short, but it didn’t ride quite like that. I’m sure Bobby [Murphy] knows this ring pretty well. I thought he built a nice track – appropriate.”

“This is a great event because of the venue and the atmosphere. You feel that your horse comes away a better horse.”