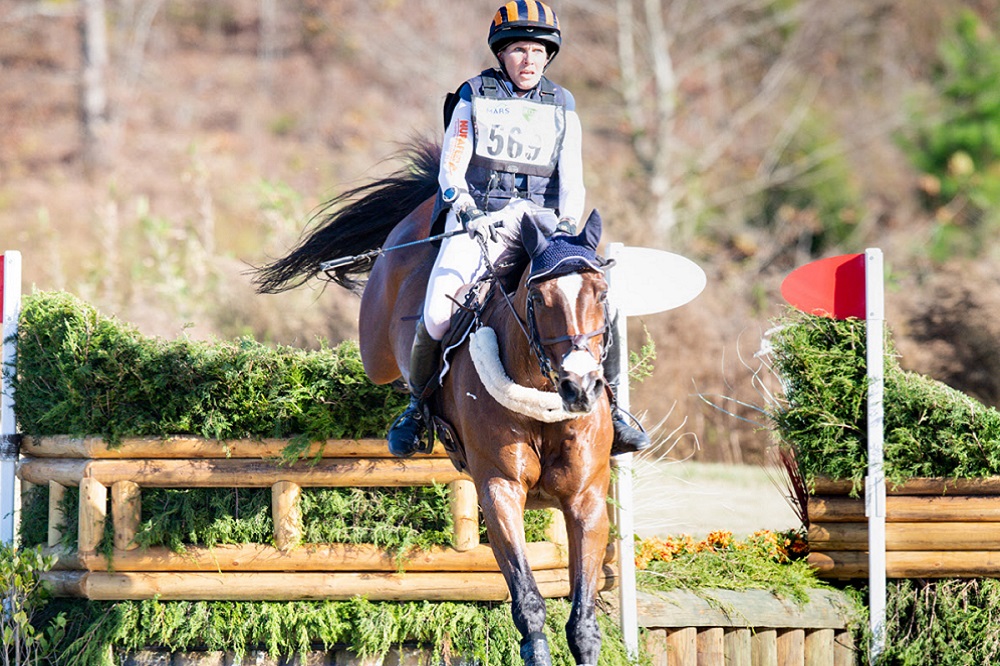 Elisabeth Halliday-Sharp (USA) and Deniro Z cleared the White Oak Cross-Country Course with just 1.60 penalties for time to rise to the lead position in the highlight division of the MARS Tryon International Three-Day Event. Heading into the final phase of the BUCKEYE™ Nutrition USEF Eventing CCI 4*-L National Championship, Halliday-Sharp sits on a score of 26.10, just two points ahead of Boyd Martin (USA) and Tsetserleg, holding a score of 28.10 with the 2007 Trakehner gelding (Windfall *PG* x Buddenbrock) owned by Christine, Thomas and Tommie Turner. Phillip Dutton (USA) and Z, the 2008 Zangersheide gelding (Asca x Babouche VH Gehucht Z) owned by T. Tierney, S. Roosevelt, S. Lacy, A. Jones, and C. Moran, rounded out the top three carrying a score of 28.80 after their double-clear Cross-Country performance.

Halliday-Sharp and the 2008 Dutch Warmblood gelding (Zapatero x French Buffet XX) owned by Ocala Horse Properties and the Deniro Syndicate haven’t challenged a long-format competition since Burghley last year, she revealed, so she was thrilled with the day’s results, taking over the lead from Marilyn Little after she and RF Scandalous retired. “Deniro is amazing and I have a great partnership with him, which makes a big difference,” she emphasized. “We haven’t run for eight weeks because Chatahoochee got canceled, which is a little bit longer than I’d like before an important four-star event, but he’s such a professional. I am a little mad at myself that I didn’t make the time, but that’s not his fault!”

In fact, Halliday-Sharp continued, Deniro Z has proven himself to be stronger and more responsive in the tack than ever before, she detailed. “He’s actually just been so incredibly polite this year. I nearly pulled him up a little bit too much in front of two combinations, and he just came back so fast. Honestly, I think every fence and combination rode how I planned it, and the horse was phenomenal and he didn’t make it feel hard. He finished very fresh. I feel like it was a great day because he finished with the attitude of ‘Oh, that was easy!’”

The pair put in a clean Dressage test to earn a 24.50 the day prior to Cross-Country, and Halliday-Sharp said that Deniro Z was full of try:

“He tries so hard, in all phases. Sometimes, maybe a little too hard, so you have to manage him in the ring sometimes. I had a really good warmup and I felt like we got where we wanted to be, which is so important. The lead changes have been his struggle, and contrary to what the live stream said, he actually had clean changes. That’s a big step for him to be able to have two clean changes. It took him years to be able to do that because of the way he’s built. We went for it; I was pleased with him. I knew we wouldn’t beat Marilyn’s score, but I didn’t want to be far behind. I was really thrilled.”

Looking forward, Halliday-Sharp noted that Deniro Z is “more than capable” of a clear Show Jumping round tomorrow, pointing to the strength he’s gained in the last year. “He’s a phenomenal horse, and a very good jumper. He feels ten times stronger this year and like a different horse compared to what he was before Burghley last year. I think it taught him a lot. I’m hoping for a clear round tomorrow, and he’s more than capable of that. If I ride him the right way, I know that’s possible. I just need to look after him tonight, put our plan in place, and then execute said plan!”

Martin and Tsetserleg improved their third-place rank to second, one of three “warriors” Martin piloted through the Captain Mark Phillips course designs, he reported. “I had a great day. I had some of my favorite horses: Blackfoot Mystery, On Cue, and Tsetserleg. To be quite honest, they were all a bit short of a run due to the fact that I’ve been out of action a lot this year, and also Chattahoochee got canceled. All three of them are warriors, and I was really pleased to get them around unscathed.”

By the time Martin swung a leg over “Thomas” to contest the CCI 4*-L division, “I sort of knew the spots that were deep and muddy, so I chose to slow down in those areas. He’s such a seasoned veteran now, and actually did the course quite easily. It was great to be back at a big event,” he admitted. “We’ve improved him a lot, but haven’t had any of our key events to go to, so it was fantastic coming to Tryon and giving it a good prep yesterday in the Dressage and a nice run today. He’s a joy to ride on cross-country, and has a serious engine.”

Martin concluded that “I’d just like to absolutely take my hat off and thank the 20 or 30 guys and girls who’ve been out on the cross-country for the last couple of days. The amount of money, time, effort and energy that’s gone into making this course rideable today is unbelievable,” he emphasized. “I think all of the riders should buy them beer! They’ve been working like dogs out there. From a rider’s point of view, I cannot say how much I appreciate the hard work, effort and energy that went into trying to make this course as safe and rideable as possible. It’s greatly appreciated. It’s nice to win these competitions, but it’s more important that the horses are healthy afterwards.”

Dutton shared that Z was “an absolute superstar” on course, particularly on a day where “nobody was quite sure how it was going to ride until your horse was out there. He jumped it all pretty easily, which was exciting. He was able to get in the time when the conditions were not ideal in the end.

The pair contested the 2018 FEI World Equestrian Games™ at the venue and are a familiar duo at TIEC Eventing competitions, but noted that today’s course felt like a new venue. “At every course you go, any time you come back it’s a new course,” he explained. “Z is a very good and athletic horse, and he loves the Cross-Country. Galloping lanes usually slow things up, but the idea was not having them today so that the horses could spread out and get better footing,” he concluded, alluding to the event run without spectators and also without ropes defining the galloping lanes. “We weren’t all on one track, so I think that was a good move to do that.”