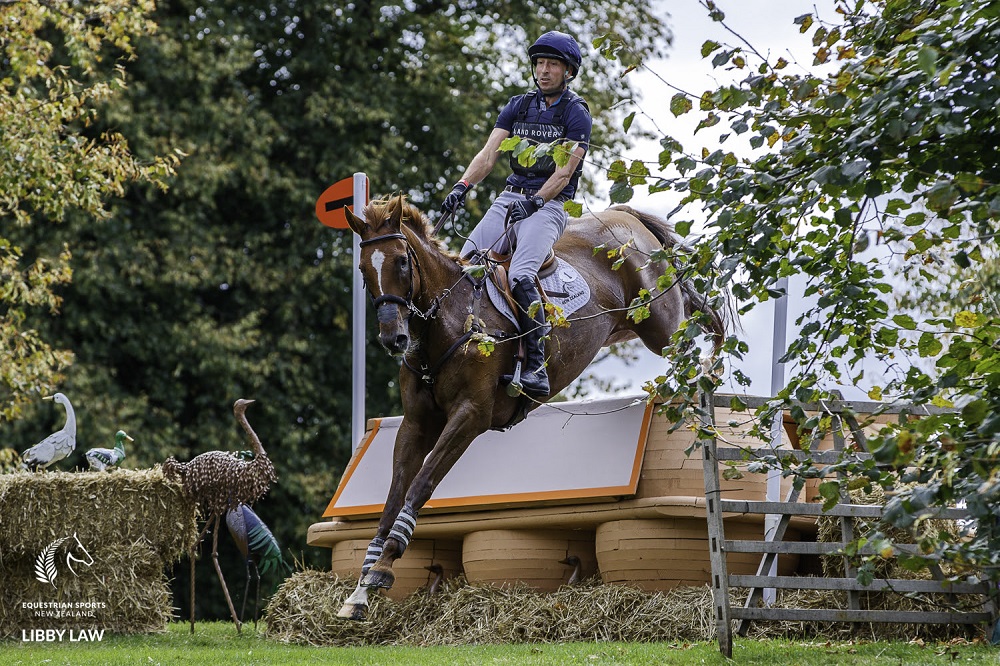 Tim Price sits in seventh place after a hugely influential day of cross country at the Land Rover Burghley Horse Trials in the UK.

The world no.1 and defending Burghley champ had three horses on the card but only one completed the Captain Mark Phillips-designed cross country today. He was the trail blazer for the 64-strong field aboard Bango, coming home clear with 12 time faults to end the day on 41.6 penalty points. He retired Xavier Faer and was unlucky to be eliminated on his 2019 Burghley champ Ringwood Sky Boy when the horse stumbled coming into the lake at the end of the course and the two parted company.
However, Tim was very pleased with Bango. “He is a Burghley horse through and through so it was fun to get out on a course that really matched who he is and how he goes,” he said.

Caroline Powell and On the Brash are in 19thspot on 67.1 penalty points, coming home clear but with 30 time faults. The time was incredibly tight, with just Piggy French (GBR) and her
Badminton winner Vanir Kamira coming home clear and inside time.

Dan Jocelyn was rapt with his “little horse” Blackthorn Cruise. “He tried his heart out and mentally he found it a challenge,” said Dan. “I knew I needed to get him home for a good experience (for the horse).” The two picked up both time and jump faults to end the day on 82.5 penalty points.
Burghley first-timer Samantha Lissington was buzzing about her round with Ricker Ridge Rui, who will have caught the eye of many with his efforts. “Rui really proved what an absolute superstar he is,” said Samantha. “It is very exciting for next year to know that I can push out hard and fast at the start and trust I will still have gas at the end.”

Equestrian Sports New Zealand high performance eventing manager Graeme Thom said the “very difficult” cross country had also produced some real highlights with solid clears while Samantha had reinforced at her first Burghley that she truly belonged at that level.

There were 20 eliminations today and 11 retirements on the course that very much delivered on its reputation as the toughest in the world. It was a meaty track that called for brave and smart riding.
The Brits are dominating the top of the leaderboard, with six in the top 10. Pippa Funnell (GBR) and MGH Grafton Street have just held on to their overnight lead to sit on 26.8 with Piggy French (GBR) and her Badminton winner Vanir Kamira right on their heels on 26.9 and Oliver Townend (GBR) with Ballaghmor Class in third on 27.3