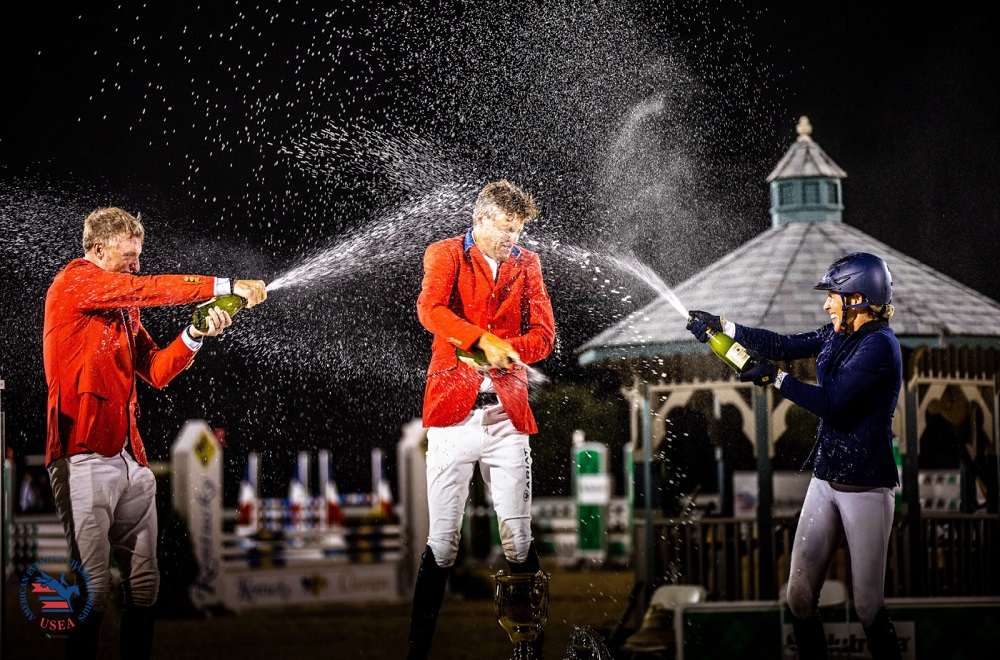 On Cue Was On Point

Boyd Martin came to the 2021 USEA American Eventing Championships (AEC) presented by Nutrena Feeds looking to defend his 2019 $60,000 Adequan USEA Advanced Final title and while he succeeded at the goal it wasn’t with the same mount. However, Martin’s victory lands him in the history books as the first rider to win the AEC Advanced class two times on two different horses.

After leading the dressage with Long Island T, Martin fell from him on the cross-country. He then returned and jumped a clear cross-country round with On Cue – déjà vu from the 2021 Land Rover Kentucky Three-Day Event. Martin started off his week in eighth place with Christine Turner’s 16-year-old Selle Francais (Cabri de Elle x On High) mare but moved up to fourth after adding only 6.4 time penalties to his dressage score of 27.3.

Bobby Murphy’s show jumping course under the lights in front of a packed Rolex Stadium proved very influential to the top of the standings and when Buck Davidson lowered a pole on both his second and third-placed mounts and the overnight leader, Fylicia Barr, dropped two rails, it opened the door for Martin and On Cue to take the win and a check for $30,000.

“To be honest, coming into the show jumping phase tonight I didn’t think I was going to win,” Martin said. “There were plenty of good horses and riders ahead of me and it is a very high-pressure event.”

The mare is one that Martin is no stranger to riding the victory gallop with, having come in the top-placed American horse at the Land Rover Kentucky Three-Day event earlier this year.

“I am just thrilled with On Cue, she is everything you dream of in a horse— she’s a mover, she’s a galloper, she’s sensitive, she’s elegant, she’s bright, and I’m just blessed to have her, she’s been on fire this year,” he said.

“I think the AEC this year has been incredible,” he continued. “It is an awesome venue, and the competition was stiff with several good competitors jumping clear just before me, but it is a brilliant event and I can’t thank the USEA enough for putting it on.”

Doug Payne and Quantum Leap made a steady climb up the leaderboard throughout the competition starting in 14th and ending in the reserve position.

“He’s a special horse,” Payne commented of his 10-year-old Holsteiner gelding (Quite Capitol x Report to Sloopy) who he has produced since he was a yearling through the USEA Young Event Horse program. “I think he is an incredible athlete and I’m beyond excited for the future. I’ve got to echo Boyd [Martin]’s in that I think this venue is one of the best in the country, and for the future of this sport.”

Following a successful finish in the Bates USEA Preliminary Horse division the day before, Liz Halliday-Sharp and another Cooley Farm sourced mount, Cooley Quicksilver, rode for ribbons as the final of the top three finishers.

“He just keeps getting better,” Halliday-Sharp emphasized of the now 10-year-old Irish Sport Horse (Womanizer x Kylemore Crystal) gelding. “He loves a big atmosphere and I think I also got a little excited about the crowd; when I finished tonight, I got a bit excited like ‘wow we have a crowd again’.”

“This is actually my first AEC event as I have been in England for so many years,” finished Halliday-Sharp. “It has been so much fun, and to be able to have it here at Kentucky Horse Park has been an incredible opportunity for all of the horses and riders to get into these iconic rings.”

While Davidson’s rails dropped him off the podium he still finished in fourth with Jak My Style, a 16-year-old Thoroughbred owned by Kathleen Cuca, and fifth with the Carlevo LLC’s Carlevo, a 14-year-old Holsteiner (Caresino x Ramatuelle).