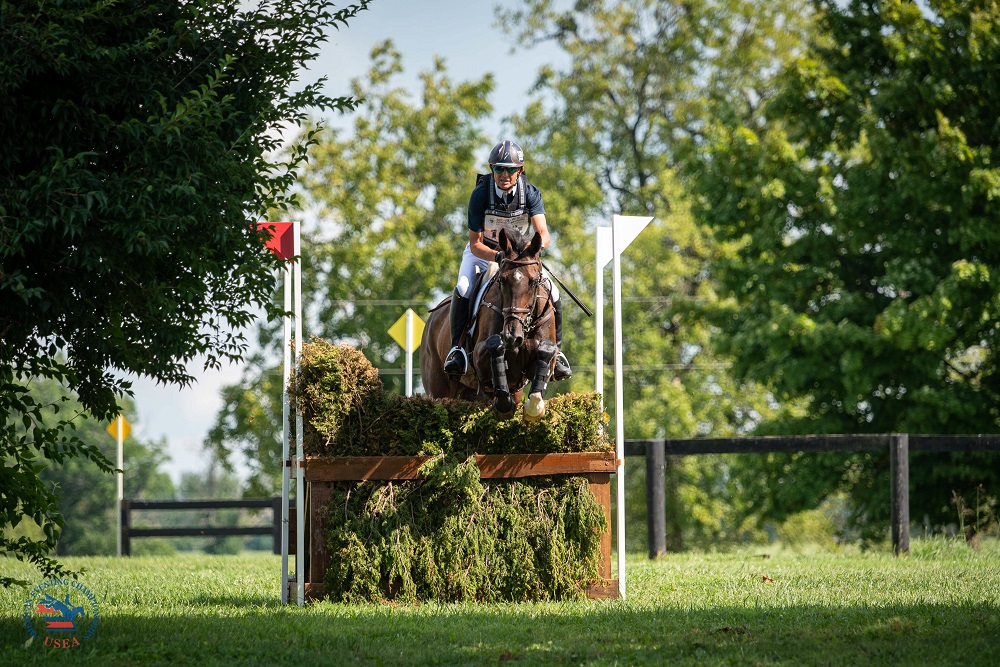 The 2021 USEA American Eventing Championships (AEC) presented by Nutrena Feeds kicked off bright and early on the morning of Wednesday, September 1 as the remaining storm weather scattered and the sun broke through the sky. Top Riders in the Bates USEA Preliminary and Intermediate divisions took to cross-country to contest Derek di Grazia’s first courses of the week.

Olympic Gold Medalist Leslie Law has queued up not one, but two horses for a championship title in the USEA Intermediate division.

The Ocala, Fla. resident held his overnight lead with the 2020 USEA Mare of the Year Lady Chatterley, the 10-year-old Holsteiner mare (Connor x Jucy) owned by Jackie and Steve Brown. The striking bay who, “has a mind of her own,” was game for Derek di Grazia’s cross country course, finishing clear inside the time to hold a nearly five-point lead.

This isn’t the first time these stablemates have gone head-to-head, at the Ocala Festival of Eventing in April 2021, these two finished first and second in the same style. For the last five years the overnight leader of the Intermediate division has always gone on to be named the AEC Intermediate Champion. Considering Law and Lady Chatterely haven’t had a show jump down in over a year and have won their last three events in a row they are in with a good shout.

“I don't mind if they keep going like this. One and two is better than one and three,” Law said. “[Lady Chatterley] went great today. She took it all in stride, quite honestly, so that was really rewarding. She felt very, very honest and really on.”

Karl Slezak, Ontario, is less than a pole behind second place aboard his own Hot Bobo. The 8-year-old Irish Sport Horse (VDL Arkansas x Taneys Leader) had 2.8 time penalties to sit on 30.7 penalties.

Bates Preliminary Rider
After making the journey from Barrington, Illinois, Fiona Cotter successfully navigated the cross-country course with her own 11-year-old Irish Sport Horse gelding (Derg Showtime x Licknaun Rangef) Miltown Malbay fault-free to shoot to the top of the leaderboard. As the only combination to make the time in the division, the duo shot from tenth place to first by carrying over only their dressage penalty of 32.1.

“I felt really great about the course today,” Cotter explained. “The footing was great and all of the fences rode well. This horse will deliver for you as much as you give to him, and he always says yes so he has been a wonderful horse to learn on.”

Cotter has been under the tutelage of Buck Davidson since the age of 18 and credits him with guiding her to bring out the best in her partner of seven years whom she affectionately calls Kid.

“Before my first ride on Kid with Buck, I had only walked and trotted in an indoor arena with him,” she detailed. “Buck however had plans to go out on the cross-country course that day so Kid was a bit wild and walking on two legs a lot, but once we got out there we ended up cantering and jumping around the field and he has been fantastic for me ever since; every day with him is really a privilege.”

The pair have had a successful year after winning their Preliminary division at Chattahoochee Hills and then again at the Fox River Valley Pony Club CCI2*-S.

Hopewell, New Jersey’s Brenna McGuire and her 10-year-old Thoroughbred gelding (Indygo Shiner x Shadowy Waters) Lorax adding only 0.8 time penalties to their previous day’s score to advance from the 16th position to second on 34.5. Sophie Miller and Laurie Cameron’s 12-year-old Oldenburg mare (Quite Capitol x Merging) Quarlotta C dropped down one position after adding six time penalties to their starting score of 29.5 but still managed to hold on to a top-three finish.

At 17, “Zatopek” is a veteran campaigner, having competed through the Advanced level of the sport. His experience was a major asset for this budding partnership, but his exuberance nearly changed the outcome of their day.

“We started off a little late leaving the start box. Sometimes he gets really excited, so he was a little bit crazy in the start box,” she said of the Dutch Warmblood gelding (Lando x Scaramouche B). “I was a few seconds behind, so towards the end, I had to really make sure to go forward to make the time.”

The 15-year-old didn’t let this deter her. She kicked ahead, catching one of four double clear rounds of the division to remain on her dressage score of 28.3.

“I was so happy, especially yesterday – we got our best score we've ever gotten. Dressage has never been our strongest phase, but I was so happy with our score. And then even happier today. He's usually always an amazing cross-country horse, so I just had to get out there and do what we normally do and kind of forget about the leaderboard. He was incredible,” she said.

Bates USEA Preliminary Amateur
Time was hard to make on the Preliminary course, but Aiken, South Carolina native Arden Wlidasin managed to finish under the optimum time of 5 minutes and 39 seconds on both of her Preliminary Amateur mounts. With Sarah Wildasin’s 11-year-old Irish Sport Horse gelding (Boherdeal Clover x Birdhill Lady) Southern Sun, Wildasin climbed from third to the lead on her dressage score of 24.2.

“I didn’t ride so well, especially to the last fence but he was fantastic today,” Wildasin detailed. “He has definitely grown a lot and become more mature because in the several areas where I didn’t ride maybe as well as I could have he really stepped in and helped me out.”

Wildasin was the one to be beat in this very division at the 2019 AEC where she claimed first with Watch Out and second on her current leading horse Southern Sun.

“He did very well when we were here two years ago but the difference in him from then to now is amazing,” added Wildasin. “He is worth his weight in gold for what he did out there today and I am hoping I will be able to give him the confidence in the show jumping round tomorrow to produce another good result.”

Michelle Koppin and her self-owned 8-year-old Holsteiner gelding (Carass x Z-Whitney) Calcourt Valley managed to hold on to their second-place position by accumulating zero jumping faults and only 2.4 time penalties for a total of 25.6. Lisa Borgia made an impressive leap from sixth to third with the 8-year-old Thoroughbred gelding (Joey Franco x Lil Mo Rhythm) Silmarillion by producing a clean and time-efficient effort to keep their original score of only 27.4.

“Today I sort of set out and I was a little bit slower than I planned early on and then I thought, ‘Today is not the day to have time faults,’” said the 2020 USEA Rider of the Year.

He's just a brilliant horse. He’s very brave. Probably the only areas that sometimes aren’t quite perfect yet in his work — he's just such a big horse, so sometimes the adjustability isn't quite where I needed to be, but that's to be expected at 6. He's green still. But now he just always wants to do the job, and he does try very hard. He’s just a really great horse.”

Martin Douzant of The Plains, Va., and Olympus sit in second place. Diane Tauber’s 6-year-old Swedish Warmblood gelding (Ferro x Kallisto) went without penalties on the cross-country for a two-phase score of 28.5.

The Bates USEA Preliminary and Intermediate divisions will be the first to be crowned 2021 AEC Champions tomorrow following the conclusion of their show jumping rounds.