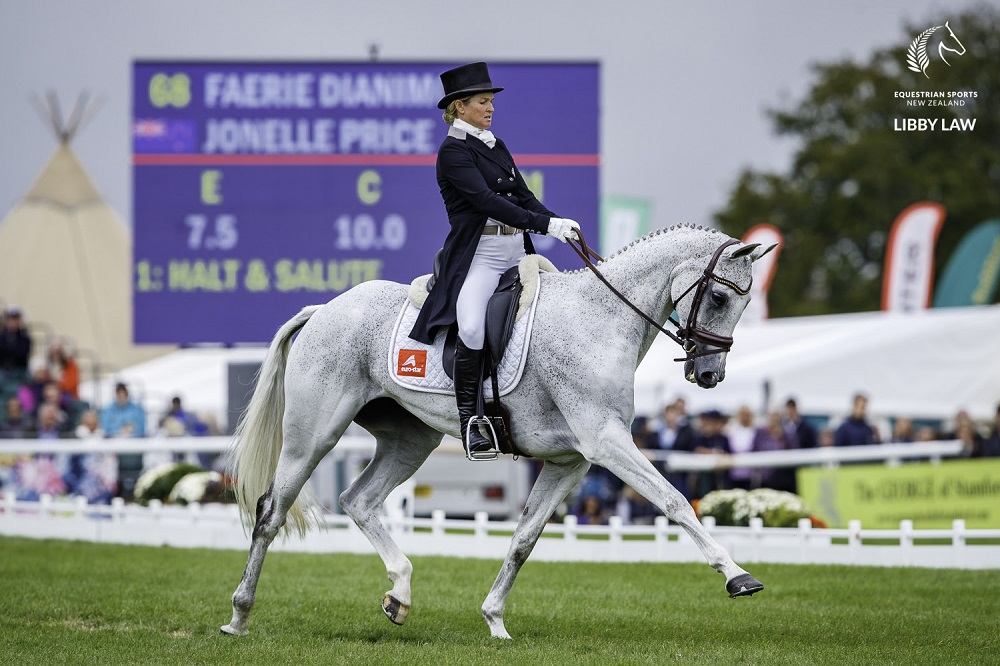 Kiwis well in Touch with Leaders at Burghley

Three Kiwi combinations sit in the top 11 at the end of the dressage at the Land Rover Burghley Horse Trials in the UK, and with just 10 penalty points across the top 20, the competition is far from over.
The Brits are dominating the leaderboard, with Pippa Funnell and MGH Grafton Street leading on 22.8, Oliver Townend and Ballaghmor Class in second on 25.3 and Izzy Taylor on Springpower in third on 25.6.

New Zealander Jonelle Price and Faerie Dianimo are in seventh equal place on 28.4 penalty points with husband Tim in ninth equal aboard the defending champ Ringwood Sky Boy on 28.7, =11thon Bango with a mark of 29.6 and 20thon Xavier Faer on 31.5.

Jonelle said she was “happy enough” with their dressage but would have liked to have been “a few marks further south”. “She is very capable but just got a little bit hot and a little bit of tension came through in a few of the movements which brought us down a wee bit,” she said.
However, with a big grunty Captain Mark Phillips-designed cross country course to be jumped overnight, she thinks it is far from over, saying the mark will be “fairly immaterial” come tomorrow. “She is nice and handy, not far off the leader and I think that is the most important thing ahead of tomorrow.”
Tim too is looking forward to the cross country. “Burghley is just the holy grail as everyone always says,” says Tim. “We just want to come and do a really good job at such a tough track as this. Now it is a bit different for me having won it, it brings a different stigma but I am just trying to ignore that and just get on with my job and take every little mini step as it comes along.”

Other Kiwis in the field are Dan Jocelyn aboard Blackthorn Cruise who are in 25thon 32.3, Caroline Powell aboard On the Brash in =43rdon 37.1 and Burghley debutant Samantha Lissington on 39.1 with Ricker Ridge Rui.