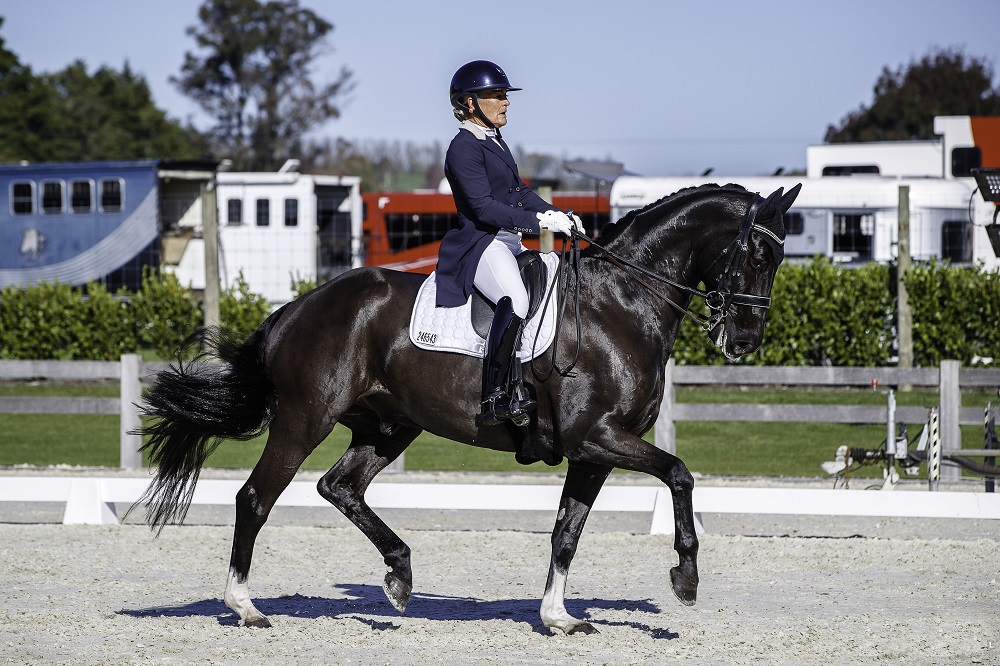 Kiwi Dressage ready for the Worlds

The Kiwis are in the house at the Ecco FEI World Dressage Championships in Herning, Denmark.

Melissa (Blenheim/The Netherlands) and Windermere J’Obei W head to the champs in some excellent form. The combination really hit the ground running when they arrived in Europe late last year, to base in The Netherlands at Stable van Olst.
The 11-year-old gelding, who was bred by David Woolley and Rania Todd, scored a personal best in the Grand Prix at the CDI4* in Aachen with 70.478%. The New Zealand warmblood gelding is by Johnson, out of Miss Pompeii, who is by Pompeii XX.

“I am feeling good leading up to the champs,” said Melissa. “Having such a great performance in Aachen has been great for our confidence.”
They’ve been taking things “nice and easy” since that outing, with a slow and steady build-up to peak at the championships. “Joey is feeling really good in training. I am very excited . . . this is going to be one incredible experience.”
She is excited to have her sister Sarah Parkes, who is also her groom, join her parents and husband Lachy in Europe. “It is a wonderful feeling to have them all here together.”

Gaylene (Te Aroha) and John (Australia) travelled to the Northern Hemisphere together and pre-champs were based at Ben Conn’s yard in Lingen, Germany. Gaylene said it had been the perfect base and she was hugely grateful for the indoor for evening training sessions as they adjusted to the new time zone.

Twelve-year-old Jax Johnson, who was also bred by David and Rania, has been with Gaylene since he was four. They notched their personal best Grand Prix score of 69.804% at Taupo.

The warmblood gelding is by Johnson, out of A La Mode, who is by Anamour, and is being cared for by groom Abbie Deken.

“Abbie has been doing an amazing job,” said Gaylene. “She’s been taking Jax for lots of hand walks and hand grazing. Excitement is certainly mounting as we get closer.”

John says he and Chemistry were made to feel very welcome at Conn’s yard. “I feel very lucky we had such a positive vibe in the barn and an awesome team around me,” he said. “The support from back home has been unreal and we are all looking forward to making everyone proud.”

Chemistry’s best Grand Prix mark came at Sydney with a 69.913% performance. The 10-year-old stallion, who is by Connaisseur, out of Cendea, who is by Johnson, was bred by G Verrijt. He is being cared for by Ellen Suann.

The Grand Prix, which counts for both the team final and individual qualifier runs over two days, with the top 30 going through to the Grand Prix Special on Monday, and top 15 from that through to the Freestyle on Wednesday
Dressage New Zealand sport manager and champ’s chef d’equipe Wendy Hamerton says the fan support being the nation’s first team to Championships since 1998, has been phenomenal.

“The global sport is at a very interesting point,” she says. “Germany who previously seemed to have a podium stranglehold will be seriously challenged by the host nation Denmark who will be led by the new darling of dressage, Cathrine Dufour.”

Great Britain will be without anchorman Carl Hester for the first time in 14 years but have young stars Charlotte Dujardin and Charlotte Fry in the team. Wendy says Sweden also looks strong having won the recent FEI Nations Cup Series, but she never discounts the United States or The Netherlands.

Ninety-five horses and 21 teams are scheduled to compete over the two days of Grand Prix. “I do believe New Zealand has a team capable of 70%,” says Wendy. “World Champs are next level and while there is added pressure to qualify a team for Paris 2024 (Olympic Games), I am confident our riders will be delivering their best on the day as individuals and hopefully a great team result will drop out of that.”

Herning is New Zealand’s only chance at qualifying a team for the 2024 Paris Olympic Games if they can finish as the highest-ranked country in Olympic Group G – comprising South East Asia and Oceania. The closest New Zealand has previously come to having a team at the Games is when a team qualified in 2011 but did not meet NZOC and ESNZ selection criteria.