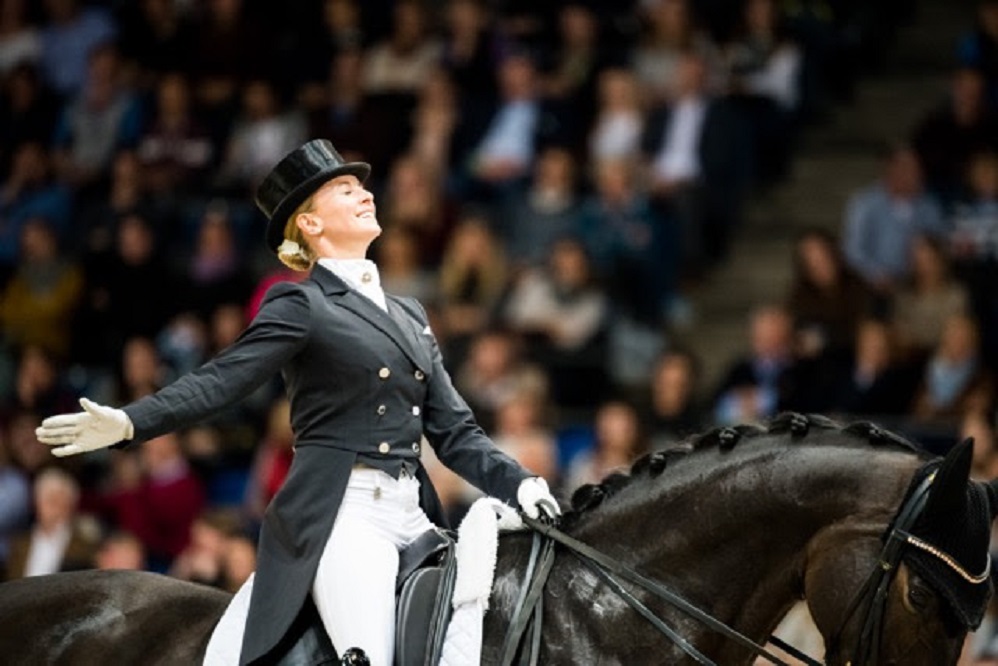 Jessica von Bredow-Werndl was “over the moon” with delight after winning the third leg of the FEI Dressage World Cup™ 2019/2020 Western European League on home ground at Stuttgart (GER) today. Riding the 12-year-old Trakehner mare TSF Dalera BB with which she claimed team gold at the FEI World Equestrian Games™ 2018 in Tryon (USA) and individual Freestyle bronze at this summer’s European Championships in Rotterdam (NED), she produced a breathtaking performance to pin defending triple-champions Isabell Werth and Weihegold into second place.

The host nation completely dominated the line-up with Helen Langehanenberg, Dorothee Schneider and Benjamin Werndl finishing third, fourth and fifth. For von Bredow-Werndl this was a very special result.

Werth, winner with Emilio at the second leg of the series in Lyon (FRA) two weeks ago, looked set to march to victory once again after topping yesterday’s Grand Prix in which today’s winner had to settle for second place. But a couple of blips saw the legendary lady trailing her team-mate who set a massive target-score of 88.440 when second-last to go.

The Freestyle began with Ireland’s Judy Reynolds and Vancouver K putting 80.755 on the board, and this pair, who got the worst of the draw after finishing an uncharacteristic 11th in the Grand Prix, were still out in front with just five of the 15 starters - all of them German - left to compete.

Helen Langehanenberg demoted the Irish duo with a brilliant performance from her 17-year-old stallion Damsey FRH who danced up the centreline with foot-perfect tempi-changes to post 83.735. And when Dorothee Schneider and DSP Sammy Davis Jr slotted in close behind with 83.395 and Benjamin Werndl and Daily Mirror scored 80.900 then it was 2013 series champion Langehanenberg who was still in command with just two left to run.

But Benjamin’s sister, 33-year-old Jessica, turned the class on it’s head with a technically brilliant performance from Dalera that also sparkled.

Jessica von Bredow-Werndl (GER), "She gave me a feeling I’ve never had before! In Rotterdam she was already amazing but today it felt even lighter and easier. Every piaffe was amazing, every transition every passage and pirouette, every half-pass…..I’m so excited about our future now!"

As Werth set off with her last-to-go ride however it seemed only a matter of form that she would overtake her compatriot’s score. But Weihegold’s test wasn’t clean, and despite a confident one-handed passage to finish, their mark of 87.240 would only be good enough for runner-up spot. “I had super piaffe/passage but had two little mistakes. I maybe risked too much - Jessica deserves to win tonight”, said the five-time champion who is chasing down four titles in a row.

“Stuttgart is one of the toughest qualifiers for the World Cup so it feels like winning at Aachen or at a Championship! I couldn’t be more happy, I knew this was possible but it’s still like a dream come true!” said von Bredow-Werndl. She’s aiming for the series Final in Las Vegas, USA next April but not with today’s winning ride. “I want to take Zaire to Las Vegas, and I’m trying to prepare Dalera for the Olympics next summer. Tokyo is already for sure somewhere in my head, and I would be delighted to be part of Team Germany there”, she pointed out.

The top nine on the Western European League will qualify for the FEI Dressage World Cup™ 2020 Final, and after the first three qualifiers the leading four on the league table are all Germans - von Bredow-Werndl and Frederic Wandres sharing pole position followed by Langehanenberg in third and Benjamin Werndl in fourth place.

The next leg will take place in Madrid (ESP) in two weeks’ time.