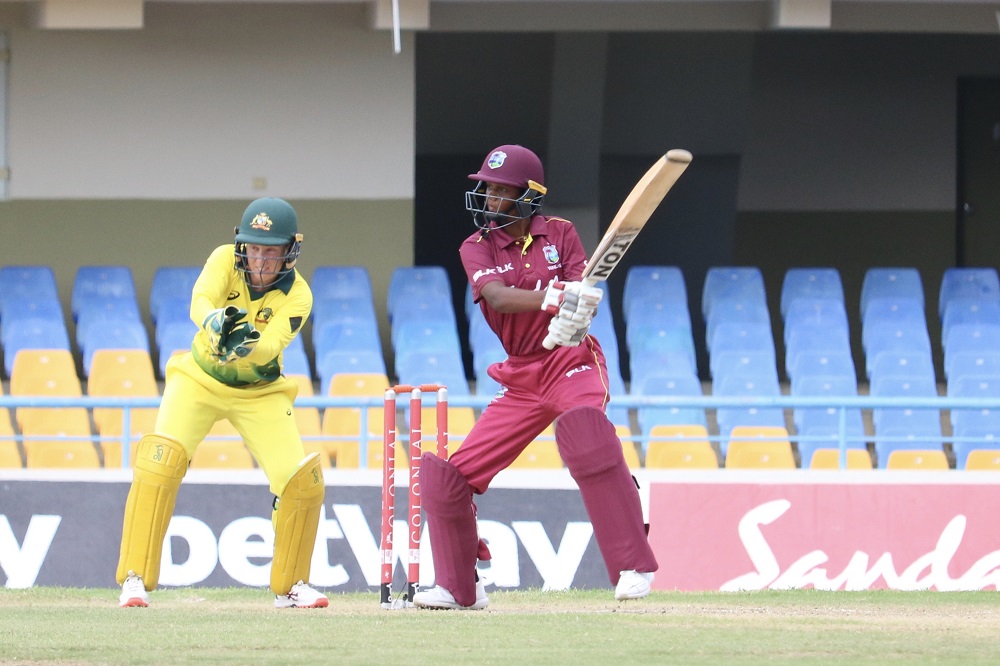 Sheneta Grimmond debuted for the West Indies Women in the second Colonial Medical Insurance One Day International and together with Shabika Gajanbi who debuted in the first match, showed why they were selected to the team as they resisted the Aussie bowling, creating a 59-run partnership before Grimmond fell on the last ball of the innings as the West Indies Women lost by 151 runs.

Australia won the toss and elected to bat first, with Rachel Hayne captaining the Aussies after Meg Lanning was ruled out minutes before the toss with back spasms. Batting first paid dividends for the Aussies, as their batters started to accelerate after a few cautious opening overs. Alyssa Healy and Haynes set the tempo for their teammates, with Haynes being the first wicket to fall. Beth Mooney retied hurt on 56, but it was the Ellyse Perry show. She scored 112 not out with Ashleigh Garnder 57 not out, as the Southern Stars posted 308/2 from their 50 overs. Stacy Ann King took 1/58 and Chinelle Henry 1/66 as the West Indies bowlers were made to toil in the final 15 overs.

The West Indies Innings once again started shaky with Stacy Ann King falling with the score on 7. Reniece Boyce was joined by Kyshona Knight and the pair looked to rebuild. But Boyce soon fell. Stafanie Taylor joined Knight and the pair were watchful of the Aussie bowlers, then they pounced when the slower bowlers came on. Knicking and knocking the ball around the Sir Vivian Richards Stadium. 49 runs runs later, Knight swung at a high and wide delivery and was caught for 32. Taylor fell the very next ball to Georgia Wareham via a very soft knick behind which Healy held on to.

The pair of Shabika Gajnabi and Sheneta Grimmond, with 3 matches of experience between them, showed maturity beyond their playing careers. They blocked, they chipped, they smashed, together they posted the highest partnership of the West Indies innings, 59 runs. Both batsmen looked fearless against the number one women’s team in the world. But alas, Gajnabi was the first to fall for 22 and Grimmond run out for 31. West Indies finished on 157/8 from their 50 overs. Georgia Wareham took 2/29 while Ellyse Perry took 1/5.