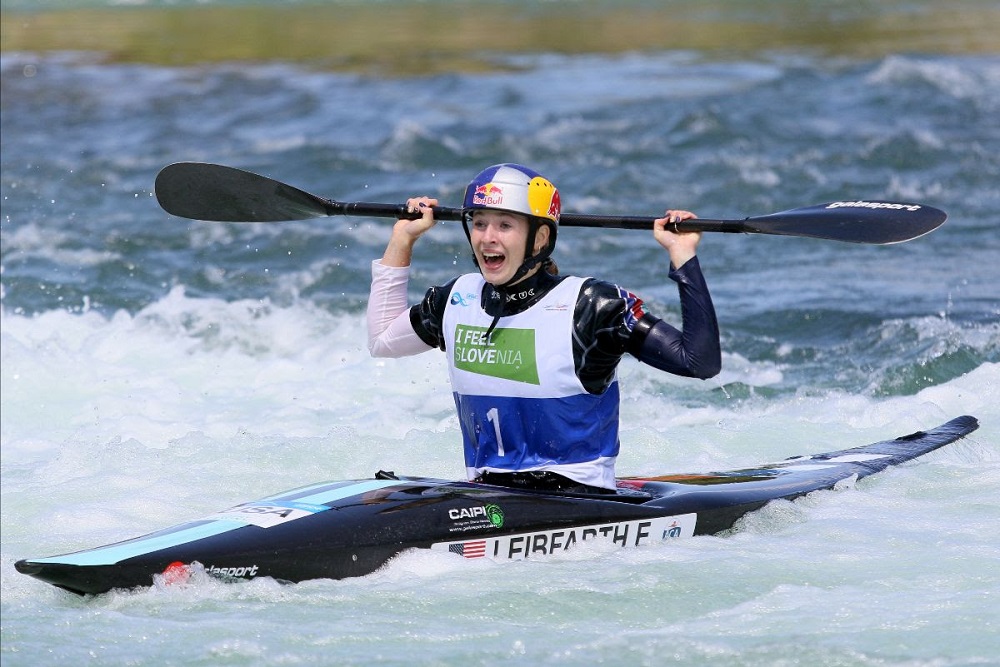 While most of her Olympic competitors have already arrived in Tokyo, 17-year-old Leibfarth opted to stay in Europe to contest the junior world titles. She won bronze in the canoe on Thursday, and then followed it up with a stunning performance to take the K1 gold on Friday.

“This is definitely something I’ve been dreaming of for a really long time, I knew I wanted to come here before the Games because I knew than no matter what happened it would be a really good feeling,” Leibfarth said.

“Having this good feeling on the water is going to help me so much in Tokyo mentally. To have the result that I wanted here is mentally so good for me for Tokyo.”

Nicolas Gestin had to withstand a strong challenge from countryman Jules Bernardet before retaining his U23 canoe world title. Gestin watched from the finish line as his teammate crossed in the gold medal position, but a video review showed Bernardet had touched a gate and was given a two-second penalty.

“I really wanted to keep this title, because I thought it was a good one in 2019, so to get two titles would be a good step forward,” Gestin said.

“I knew when Jules was in the final that he would be fast. But that’s the game, I’m happy for him because it’s his first world championship medal, and he is so fast so he deserves a medal.”

Czech former U23 world champion Vaclav Chaloupka posted a clean run, but could not match the time of the two Frenchman and had to settle for bronze.

“I was very nervous before the semi-final, but for the final I was okay. At the bottom of the course I didn’t paddle very well, but I think I did a great job on the rest of the course. For my first ever world championships it was very nice.”

Great Britain’s Bethan Forrow caught the attention of the paddling world when she made the final of the ICF senior world championships in Brazil in 2018, and on Friday showed that performance was no fluke with a determined win in the women’s U23.

Forrow picked up an early penalty, but said she knew she could make up the time before the finish.
“I told myself to keep calm, I knew that there was a lot of time to be made up at the bottom of the course, I just fought right through to the end,” Forrow said.

“It’s been amazing getting back on the start line. With Covid it’s been two years since we’ve been on the international start line, so I think the whole team was eager to get back out here.

“I’m speechless. It’s been a crazy weekend, and the girls have not made it easy at all. I’ve absolutely loved paddling in Tacen.”