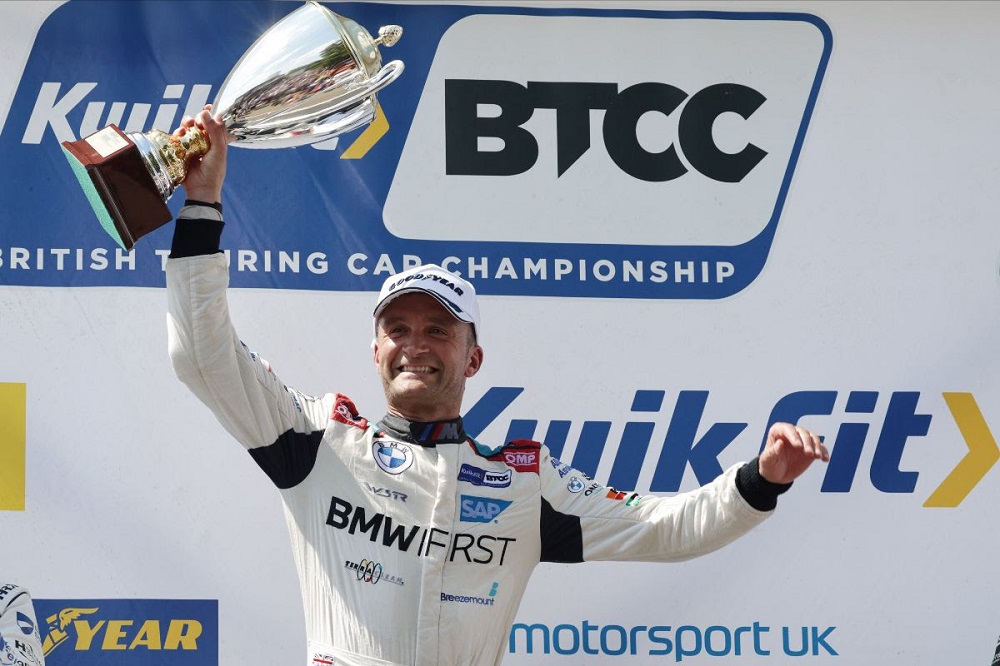 Turkington does the double

NAPA Racing UK’s Ash Sutton then went on to win the finale as the cars and stars entertained a huge crowd amid sweltering conditions in Norfolk.

Turkington claimed a relatively routine lights-to-flag victory in the opener as he kept Hill at bay for the duration.

The only change in the top five happened on the opening lap as Car Gods with Ciceley Motorsport’s Adam Morgan blasted around the outside of Stephen Jelley’s BMW 330e M Sport with an impressive move.

Rich Energy BTC Racing’s Jason Plato withstood huge pressure in the early running to claim an encouraging top-six finish, with a gaggle of cars battling for seventh behind him.

Turkington made it two out of two with yet another commanding success in the second bout.

Hill made the opening lap one to remember as he ran side-by-side with Turkington for a number of corners. The battle swung one way and then the other, but the more experienced man just about held on.

There was one brief safety car period for the Northern Irishman to contend with, but status quo remained following the restart as Turkington, Hill and Ingram completed an identical podium to the first encounter.

Morgan grabbed his second successive fourth-place finish, as he was once again followed home by Team BMW’s Jelley.

The most eye-catching performance came from Toyota GAZOO Racing UK’s Ricky Collard as the young star made up five places from his grid position to take sixth – the best result of his season so far – with better still to come later in the day.

NAPA Racing UK then secured its second Kwik Fit British Touring Car Championship victory in as many race weekends, as reigning champ Sutton fought back to win the finale.

Halfords Racing with Cataclean’s Dan Rowbottom made a stellar getaway from the front row as he surged around the outside of Sutton’s Ford Focus into Riches.

A minor mistake from Rowbottom later in the lap, however, was enough for Sutton to nip back by while Rich Energy BTC Racing’s Plato also made his way through into second – the BTCC legend contesting his 650th race in the championship.

The top two pulled clear as Rowbottom began fading towards the chasing pack, and the Honda man would eventually drop to tenth.

The final place on the podium led to a raucous last lap as Ingram squeezed past Collard, before the latter fought back at the next turn to retake the position – albeit having made contact with his rival.

Although Collard crossed the finish line in third place, the positions were subsequently switched when he received a post-race penalty for his involvement in the incident.

Hill and Turkington finished fifth and sixth respectively, as the West Surrey Racing duo rounded off a great day’s work.

Turkington’s phenomenal weekend – one of the best in his illustrious career – saw him extend his advantage in the Drivers’ standings to 15 points from Ingram, with Hill and Sutton a further nine and ten points in arrears respectively.

The Jack Sears Trophy is still being led by Autobrite Direct with JourneyHero’s Bobby Thompson, whilst Turkington holds sway in the Goodyear Wingfoot Award.

Colin Turkington said: “It’s a dream weekend. Even when you’re leading, it’s by no means easy. I’ve never been so hot in that car in my life! Team BMW have given me a really fast 3 Series here at Snetterton – as we have the past three years. To do well in this championship you have to be on top of your game and, with two other quick drivers in the team, we’re pushing each other always to the next level. Sometimes it’s a pain having a quick team-mate, but it benefits us also. We’re working hard in every department; we haven’t got here by chance and we’re pushing the envelope everywhere. It’s just rewards today. 500 races is a massive milestone and I’m very grateful for the career I’ve had and the successes I’ve had in the BTCC; but I’m still hungry for more.”

Jake Hill said: “I’ve closed the gap ever so slightly on Tom [Ingram] again, Colin’s [Turkington] got away but we’ve done a really good job today. Maybe this is the new and improved Jake Hill... it was still great, another one-two for BMW and my ROKiT MB Motorsport machine was P2. I always feel anything over 40 points is a good weekend and I’ve bagged 45 here after my 59 at Knockhill, so it’s a very good weekend. I’ve had five podiums in a row, which I’ve never done before in my BTCC career, so that’s another highlight for me. The BMW was in a good window all weekend and a pair of one-twos is obviously very good for WSR and BMW. We’re right there in the title fight with three events to go, so it’s definitely all to play for.”

Tom Ingram said: “I think this is a weekend where we have maximised what we could from it, and I don’t really feel we could have expected much more given the pace of the BMWs. I’m really pleased to be coming away from the weekend with three podium finishes and it’s been a very 'pointsy' meeting that has paid off quite well for us. It’s a shame that we weren’t able to score enough points to outdo Colin [Turkington] but we’re only 15 points behind and that means we are right in the mix with three meetings still to go. From here we go to Thruxton which is where we went well earlier in the year, so we just need to take what we have learned here, do our homework and see where we end up.”

Ash Sutton said: “That’s mega. If I’m honest, we made the exact same settings in terms of changes for race two but the damage from the contact with Dan [Cammish] put all the alignment out and we were lucky to get back to P9. If I had that car in race two, it would have been a different story. That’s mega I can’t thank NAPA Racing UK enough! [Jason Plato] kept me honest, the old boy, didn’t he? First couple of laps, we set up for the long term, the long race, so she was a bit lively. I saw Jason was closing the gap and thought ‘I’ve just got to be patient with this’ and then his tyres fell away and we carried on and it was time to put our head down and set some quali laps.”

Jason Plato said: “I mean the 650 thing is always nice but it doesn’t mean anything to me! It’s great being back on the podium, we’ve worked really hard this weekend, and I’ve got a great chassis underneath me! It was a good race actually. I started to chip into Ash [Sutton] and I started to just reel him in over the first four laps, but I was using everything on my tyres and I thought ‘well, there’s a bit of a gap behind, let’s just see what happens’ and then you’ve got to stop deploying hybrid because you’ve not got all the laps and as soon as I did that, he was gone! I thought I’d just stay second, that’s nice, isn’t it? It’s really good to get a podium and the team has had a really tough weekend, so it’s a nice reward for them.”

Race 1
Dexter Patterson was penalised by the addition of 1.2 seconds to his overall race time for an incident involving Josh Cook