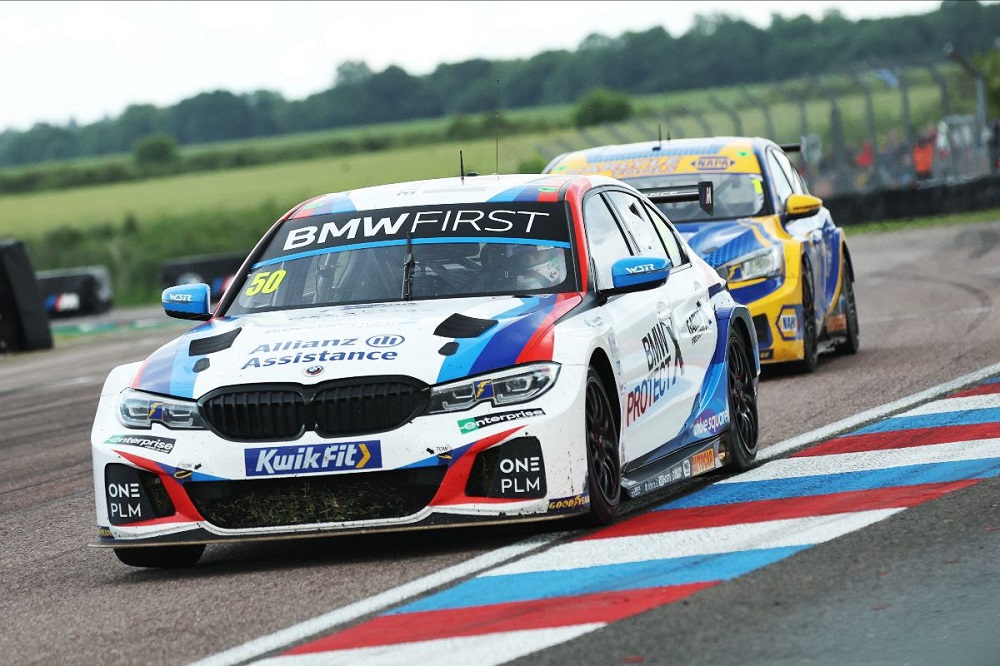 BMW took charge in the Manufacturers’ title race thanks to a triple-podium finish on an action-packed day of British Touring Car Championship racing at Thruxton.

A pair of second-place finishes for the WSR-run ROKiT MB Motorsport car of Jake Hill and another for Team BMW’s Colin Turkington ensured that the BMW 330e M Sport drivers were among the star performers of the day.

Northern Irishman Colin’s day was a lesson in metronomic consistency. After being shuffled backwards on the first lap of the opening race, he showed all the skill and determination that has made him a four-time BTCC champion.

He recovered to fourth spot with a daring passing move into the UK’s fastest bend - the 130mph Church corner - and added an identical result in Race Two.

Drawn in fourth place on the partially-reversed Race Three grid, a superb getaway brought him up to second and put him into a race-long three-way fight for the win.

Second place - his third podium of the year and the eighth scored by a WSR-run car in 2022 - lifted him to third in the Drivers’ points and ensured that BMW were the winning manufacturer in all three races as the brand moved to the head of the championship.

Stablemate Jake had qualified on the front row for a third consecutive event on Saturday and produced near-identical performances in Races One and Two to finish second on each occasion for ROKiT MB Motorsport.

Unfortunately for the Kent racer, contact from a rival at the chicane early in Race Three damaged his rear bumper and led to race control ordering him to pit on safety grounds to have the flapping bodywork removed.

He resumed 25th and climbed to 21st by the chequered flag, but his earlier podiums ensured he stays in the title hunt in fifth spot overall.

Team BMW’s Stephen Jelley was another to show impressive speed. Unfortunately for the Leicester racer, this was in the form of a dynamic recovery drive in Race Three that was the result of him being hit from behind at the Complex and spun early on.

A superb performance followed as he climbed from 29th and last to 16th by the chequered flag. This added to ninth and 14th in the earlier pair of races.

The next event takes place at Oulton Park, Cheshire, on June 11-12.

Colin Turkington, Team BMW, said: “To get another podium - and at a track that’s been tricky for us in the past - is a good result. It’s a good load of points and I’ve moved up to third in the championship, and those are definitely the positives because points mean prizes in the BTCC. Yesterday’s qualifying lap turned my weekend and put me in the ballpark for the podium in all three races. I never really felt I was significantly quicker than anybody else in the key areas to make the passes, but over a lap the speed was strong. The battle with Ash [Sutton] behind and Adam [Morgan] in front in Race Three was pretty hard, but it was fair and second’s a good result to end the day with.”

Stephen Jelley, Team BMW, said: “I had great fun in the last race coming through from the back, but it’s a shame that I had to. I feel like I’m driving really well at the moment, but the results just aren’t coming. I’ve been turned around twice today and that’s really impacted my finishes, which is so disappointing because the BMW is so good right now. I’m going to forget about today and focus on annihilating everyone at Oulton Park - my favourite track and a circuit where the BMW should be awesome.”

Jake Hill, ROKiT MB Motorsport, said: “It’s been a good day and a good weekend. I certainly can’t complain about two second places, but 10 points in Race Three would have been so useful for the championship, so to lose them because another driver chose to compromise both our races instead of giving me room and probably still passing me is pretty frustrating. The team warned me that Thruxton might be tougher than the previous two events because it suits the front-wheel-drive cars better than us, but we’ve scored good points to stay right in the hunt for the championship, so I’m pleased overall.”

Dick Bennetts, Team Principal, said: “Three races, three podiums and three manufacturer wins is a strong weekend at a track that suits the front-wheel-drive cars more than us. Plus one of our customer BMWs has had a win, so that’s good to see too. Yes, it could have been better had Stephen and Jake had a bit more luck - especially in the third race - but we’ve taken the lead in the Manufacturers’ Championship at BMW UK’s local circuit so that’s a very good feeling to be leaving with.”