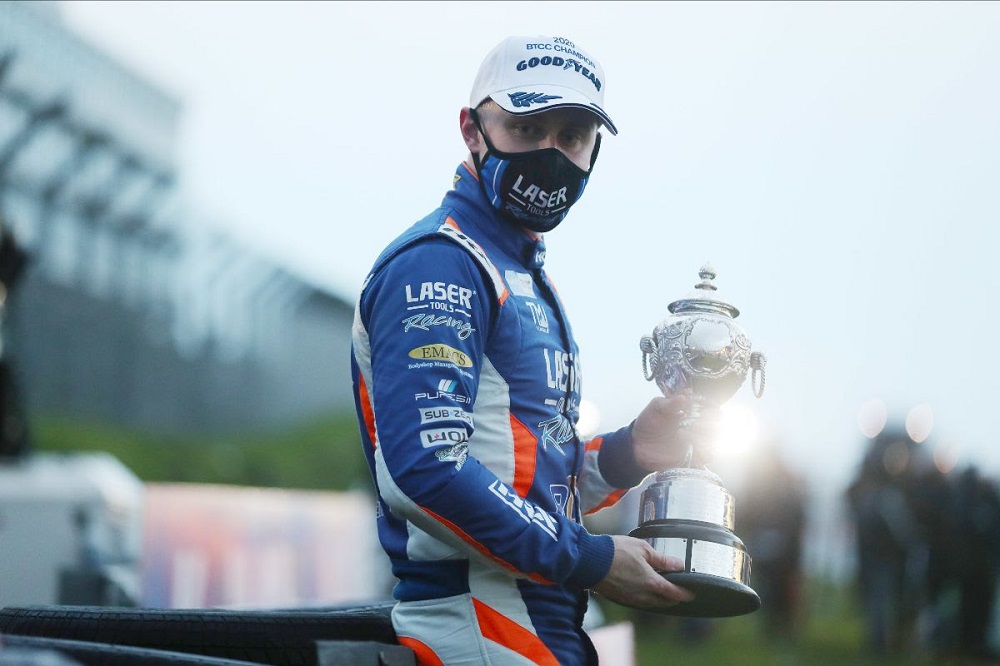 Laser Tools Racing’s Ash Sutton is a two-time British Touring Car Champion after clinching the title at Brands Hatch earlier today (15 November), as the curtain came down on a dramatic season of wheel-to-wheel racing.

The Infiniti Q50 driver came into the season finale weekend trailing defending champion Colin Turkington by nine points in the overall standings – the Team BMW star aiming for a record fifth title – but Sutton immediately turned things around at the Kent circuit.

He qualified third on Saturday afternoon while Turkington could only manage eighth, as the BMW 3 Series seemingly struggled for pace in the wet.

Turkington’s hopes may have been dashed as early as Sunday morning when heavy rain descended on the 1.2-mile Indy circuit and the opener would commence in extremely tricky conditions.

Halfords Yuasa Racing’s Dan Cammish produced one of the best performances of his BTCC career so far to win the opener from fourth on the grid.

The Honda man blasted around the outside of Rory Butcher’s Motorbase Performance Ford Focus at Paddock Hill Bend on the first lap, and he soon saw off Sutton ahead of him.

The pivotal moment came on lap 13 when Cammish squeezed his Honda Civic Type R down the inside of Ingram’s Toyota Gazoo Racing UK with Ginsters Corolla, as the pair climbed the hill towards Druids. It was a tense moment as Cammish braked as late as he dared, just about stopping his #27 machine on the run through the slowest corner on the track.

It was a fantastic move and one that eventually saw Cammish largely cruise away… that was until Sutton also took his opportunity to pass Ingram through Surtees. Sutton set the fastest lap as he closed in on Cammish, but his challenge came too late.

Sutton – now leading the overall standings – went one better in the second contest as the 27-year-old extended his advantage by winning the wet-dry race in commanding fashion.

Ingram and Cammish finished second and third respectively – the former now out of title contention heading into the grand finale – whilst Turkington could only manage an improved fourth place.

Turkington’s loosening grip on the championship trophy eventually ended in the final bout when Sutton cruised past the BMW 3 Series on his way to taking fifth place – securing more than enough points to comfortably earn a hugely deserved second BTCC title.

Butcher completed his impressive season with victory in the final encounter at Motorbase Performance’s home track. Ingram scored a podium hat-trick on-the-day with another second-place finish and Jake Hill celebrated his new deal with MB Motorsport accelerated by Blue Square by taking the final rostrum on offer in the 2020 campaign.

So, it was a delighted and emotional Sutton who clinched the Drivers’ crown – lifting the most coveted trophy in British motorsport. Turkington and Cammish were second and third respectively, Ingram cemented fourth place during his positive weekend, whilst Butcher completed the top five in the overall order.

Michael Crees was one of the happiest people in the paddock as the sun came down at Brands Hatch – the Kent driver lifting the Jack Sears Trophy at his home circuit.

The Kwik Fit British Touring Car Championship – having successfully completed its rescheduled but delayed campaign due to the COVID-19 pandemic – will be back in April next year.

Ash Sutton said: “It’s an absolute dream to get this, for an Independent team to win the overall championship. It’s been a long time since that’s happened, so I have to thank Laser Tools Racing, BMR Engineering and everyone involved. It’s just a real shame that we can’t experience it with the crowds and fans. All year we’ve tried to put on a good show, and it’s been absolutely mega to even be racing after everything that’s happened, but without your support at home it wouldn’t be possible.

“Coming into the weekend, we saw it was going to be mixed conditions both days. Obviously yesterday in qualifying it was wet and we just missed out on that pole, but we were in a perfect position today and despite it drying out in race two, the car came alive and I was a bit shocked myself. The boys and girls back at base, those here this weekend and all my family, they’ve delivered me the perfect year and without them this also would not be possible.

“I spoke to Louise [Goodman] before and she said ‘you must think you have one hand on the trophy’ and when you’re coming into the final race nine points ahead yes you do to some extent, but obviously touring cars can change so quickly and that race fell into our favour with the rain. We sat behind Colin and I wasn’t willing to make a move until he made a mistake or left the door open which he did and I made the most of it – from that point onwards we just drove off into the distance.

“I learnt the hard way at Croft, race two bit me hard when I ran into Jake but I’ve calmed. I’m a new man in some respects and we’re just going to sometimes have to bite the bullet and say we’re not on a winning weekend but for sure this weekend the inner racer came out and we were there. We still managed the results when we needed to but I took the gaps when I saw them.

“I’d like to think that we won the championship in that last race with the inner racer showing, rather than the conservative. I still wanted to give the guys at home a good show and we did that to come away with the championship.”

Colin Turkington said: “It’s been a very positive season overall, and it’s great for all of us to win the Manufacturers’ and Teams’ championships, both of which are clearly very important titles.

“I gave it my very best shot at defending my Drivers’ championship, but there’s absolutely nothing to be ashamed of finishing second in a series as competitive as the BTCC – it genuinely is one of the toughest championships in the world to win. It ultimately wasn’t to be for me this year.

“I tried to be as consistent as I could and we came very close, but the low-grip conditions didn’t favour us at Brands. We showed the pace we had in the dry over the second half of race two, and at the end of the day, we can hold our heads high.

“We’ve had some great results this season and the Team BMW guys have done a fantastic job to provide me with a great car throughout, and everybody gave 100% in the pursuit of victory. They should all be very proud of what we have achieved.”

Dan Cammish said: “I’m going away from here with my head held high and incredibly proud of what we’ve achieved this year. I think to be third overall is a great result with the level of talent on this grid and the teams in this championship, it gets better and better all the time.

“I thought we were mega today – in fact, I think we were really good all season. Everyone’s got a story to tell, I know that from last year. Everyone can say ‘if only this, if only that’ but I think 99% of the time we’ve got everything out of it. I’m very proud of that fact. I really am going away from here very content.

“It’s a fantastic result it really is. It’s so close! I don’t know how Alan [Gow] does it, but he manages to get us all here at the very end and he always keeps it so close and all to play for.

Everyone’s points are actually beyond what we scored last year despite being actually one round less, which kind of shows you just how competitive it has been. To do nine events with all the troubles that everyone’s faced is brilliant and testament to the BTCC, and I hope everyone out there’s enjoyed it and I can’t wait to welcome everyone back next season.”

Tom Ingram said: “It was a hugely enjoyable weekend; to get a podium in every single race is fantastic. Without that little squabble with Rory at Snetterton, it would have been six podiums on the bounce.

“The car has felt fantastic in the second half of the season, so I’m really, really pleased. But I’ve got to say a massive well done to Ash and all the guys at Laser Tools Racing, they’ve done a great job this year and full credit to them for getting Ash’s second title.

“I think we’ve shown in the second half of the year that we’ve got the pace. We haven’t been off the front row in qualifying over the last four races, we’ve had podiums every single weekend through from there as well.

“We had some misfortune at the start of the year, so I think a bit of luck is the key. We’ve shown we’ve got the speed and everyone at Toyota Gazoo Racing UK with Ginsters has shown that the Corolla is a great car, we just need that luck next!”

Rory Butcher said: “Fantastic! We really needed that to go into the winter. It’s been a tough few rounds, but we’ve made team boss David Bartrum very happy. We’ve had such a great year with a brand-new car. The Ford Focus ST came out of the blocks really fast and it’s been great all year.

“We’ve had some bad luck; I’ve made some mistakes and it’s been a learning experience. In the middle of the season, two or three rounds in a row we didn’t get everything out of it that we wanted to. We’re finishing fifth in the championship and we’ve had numerous podiums, pole positions and wins, but we need to get more consistent next year if we want to challenge someone like Ash.

“I was really comfortable out there and the car was so much better than it had been in race one, so I was feeling good. It was only in the last few laps that I saw Tom’s lights start appearing in my mirrors and I thought ‘here we go’ but I kept it together, pushed a little harder to keep the gap and brought it home.

“It’s our first year and it’s been a fantastic new car. Our goal for next year is to come back fighting and put in an even stronger fight, with everything we’ve learned about the championship and the car itself, so we’ll be back!”

Race 1:
Senna Proctor was officially reprimanded and had his licence endorsed by the addition of two penalty points for an incident involving Nic Hamilton

Race 2:
Colin Turkington was penalised by the addition of 2 seconds to his overall race time for gaining an unfair advantage in an incident involving Dan Cammish under yellow flag conditions