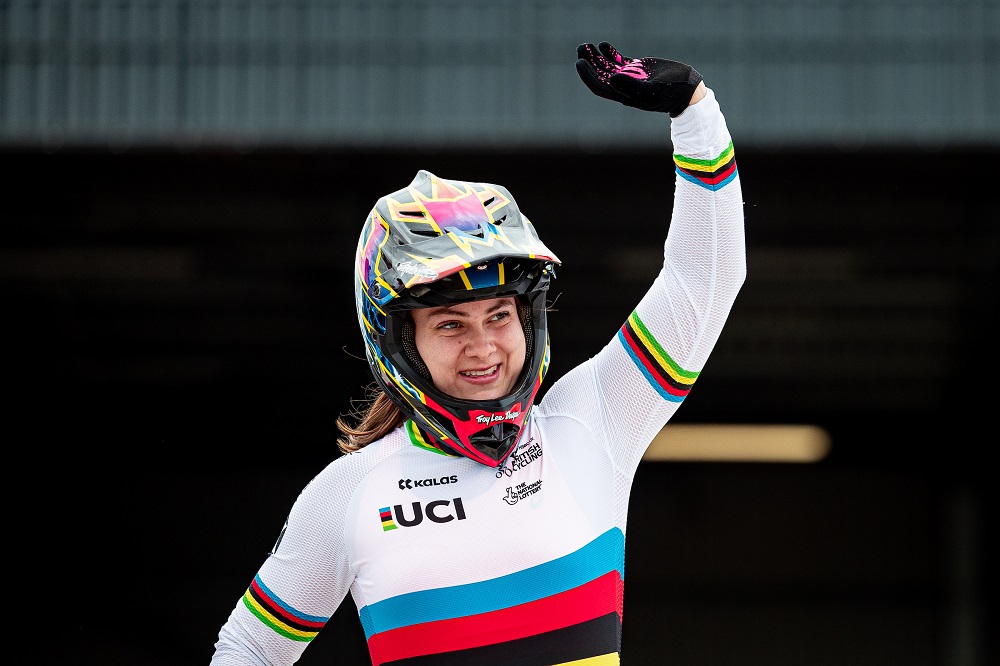 World and Olympic champion Beth Shriever stormed to silver in front of a sold-out home crowd in the second round of the UCI BMX Racing World Cup in Glasgow, securing a second podium of the weekend for Great Britain following Kye Whyte’s bronze in yesterday’s first round.

Shriever qualified third in the first round of the elite women’s competition to move straight through to the semi-finals, in which she was pipped on the line by Switzerland’s Zoe Claessens, with the pair finishing comfortably ahead of the remainder of the field.

In the final a blistering start saw Shriever lead the race going into the final corner, but Laura Smulders of the Netherlands battled back and narrowly pipped the Olympic champion to the line to make it a perfect weekend, following her victory in yesterday’s first round.

Afterwards, she said: “I had a pretty decent gate, was leading most of the way, and saw on the screen that Laura was behind me so I had to stay smooth. Over the moon with the result and had a pretty good lap so really, really happy.

“It’s been a bit of a stressful weekend, obviously a home crowd gets you nervous, tensions were high, but I felt like I was able to manage it pretty well and I’m really happy to come away with a second and in a good place ahead of Papendal.

“My main goal this year is to make consistent World Cup finals and I’ve done that so far, so to come away with a podium today is an added bonus. It was an amazing atmosphere and I was really happy to give back to the crowd.”

Paddy Sharrock and Ross Cullen qualified in second in their round one heats, while yesterday’s bronze medallist Kye Whyte progressed in third. Quillan Isidore’s fifth place saw him move into the last chance round, which he won to join his teammates in the 1/8 finals.

Another second-place finish for Cullen took him through the quarter final, with Sharrock and Isidore also progressing, however it wasn’t to be for Whyte, who exited the competition.

While Cullen, Isidore and fellow British rider Eddie Moore were unable to progress further, a confident performance from Sharrock saw him take third place and a spot in the semi-final, where a sensational first corner saw him burst from the back of the field into third place on the second straight – a position he held to the finish to seal a place in a second career elite World Cup final.

However, despite a strong start, a crash on the first corner ended his medal hopes, though he was thankfully still able to get back on his back to cross the line in front of an appreciative home crowd.

Following the race, Sharrock said: “I got out of the gate really well, obviously it was tight, it always is, but as I landed into the turn I thought I could be in a good position, but as soon as I thought that I was on the floor. There’s not too much I can do about it now, the race is done, but hopefully the body is good enough to go again next weekend. It’s all coming together finally and I’ve just got to keep it going now.”

In the under-23 competition the Great Britain Cycling Team’s Ryan Martin was eliminated in the 1/8 final, but Matthew Gilston, Callum Russell and Emily Hutt all battled brilliantly to secure places in the quarters.

Despite a strong start Hutt was unfortunate to lose momentum following a clash with another rider on the final corner and finished sixth, while Russell and Gilston exited in fifth and seventh respectively.