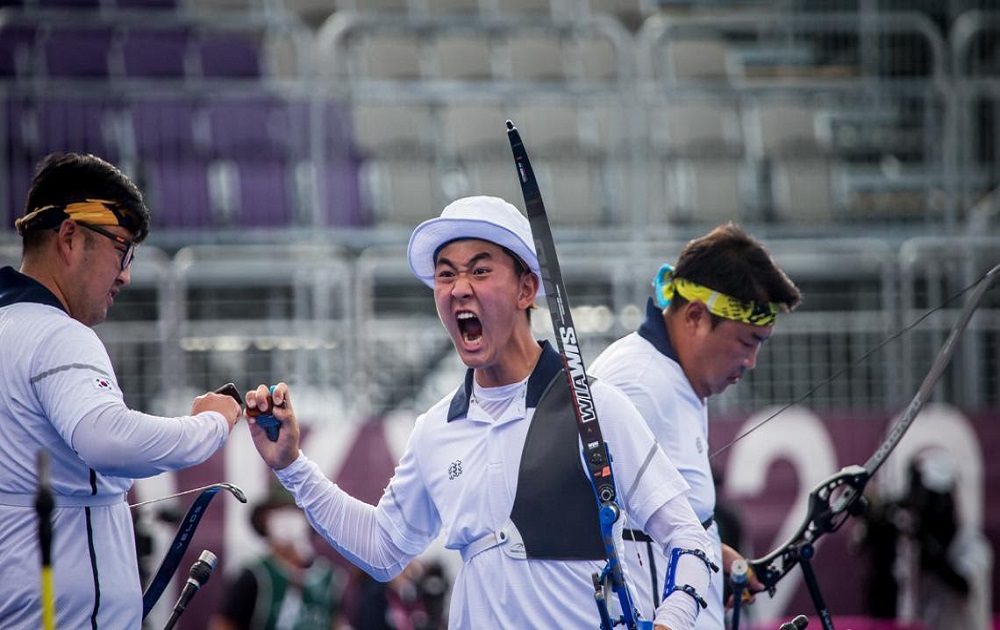 The trio – a mix of youth and experience – was in a class of their own.

“Every time we do an Olympic Games, we think we can win every category and that becomes our goal,” said Jin Hyek.

“After the London Olympic Games, my dream was to be on the Olympic stage again, so today, for me, I think my dreams are coming true and I will do my best in what remains.”

The Korean team‘s first two sets of the tournament were 59s as they dropped India in three.

It was in the semifinal that the top seeds had a scare. Japan shot the right arrows at the right time, pouncing on two eights from London 2012 Olympic Champion Oh Jin Hyek in the fourth set to force a tiebreak.

Both teams shot 28s – and it was the youngster, Kim Je Deok, who acted the hero.

His 10, shot from the middle position in the rotation and accompanied by another of his now-signature screams, was closer to the middle than Yuki Kawata’s. It was the closest anyone came to upsetting the favourites.

Sets of 59, 60 and 56 points steamrolled Chinese Taipei’s effort in the final

This is Korea’s second consecutive men’s team title at the Olympics and the sixth in total. No other team has won it more than once.

And no previous team has looked as impressive.

Each member of this Korean squad was better than every member of every other team on the field. There was, simply, no weak link.

Kim Je Deok and Oh Jin Hyek averaged 9.61 points an arrow through their three matches in the arena, while Kim Woojin – the two-time World Archery Champion – brought up the rear, averaging a world-class 9.46 points per arrow.

The next-best performer was Chinese Taipei’s Tang Chih-Chun on 9.38.

“Oh Jin Hyek and I have done a lot of international competitions as a team, so we have a lot of experience in the team matches, but we have been training with Kim Je Deok for around a year, maybe,” said Woojin.

“It might be a short time, but I feel it isn’t. Today we have done so well as a team and I’m satisfied with our performance.”

According to the advanced statistics, the Korean men had a 69% chance of taking home gold before any arrows were shot in the finals session. Japan nearly – and very much could have – caused the upset.

Ultimately, though, Korea was by far the best team on the line and the deserved gold medallist.

It is a particularly special result for Oh Jin Hyek who, despite becoming the first Korean man to ever win individual gold at the Olympics in 2012, did not have a team gold medal from London. At those Games, Korea lost to the USA in the semifinals and finished with bronze.

Third place in Tokyo went to Japan after they beat the Netherlands in a shoot-off, this time winning the closest-to-the-middle measure.

The archery competitions at the Tokyo 2020 Olympic Games continue with the individual events, starting on Tuesday 27 July 2021. (There have been adjustments to the schedule due to incoming inclement weather.)