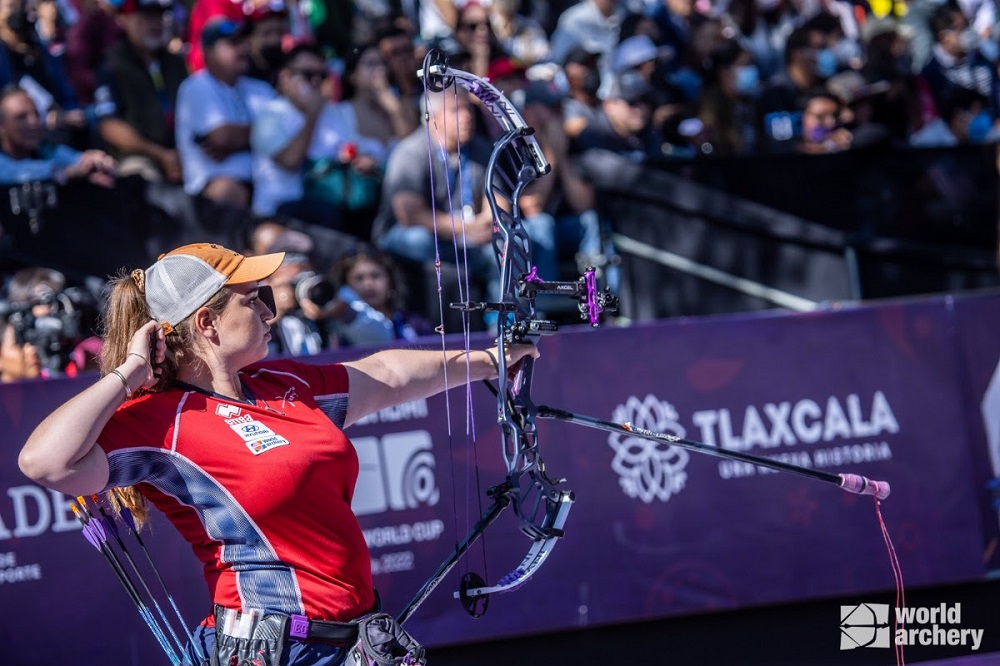 It has been a phenomenal year for both Ella Gibson and Bryony Pitman with the road to the Tlaxcala 2022 Hyundai Archery World Cup Final being paved with success for both.

Showcasing her exceptional talent, Ella Gibson secured a fantastic, hard fought silver medal in the Compound Women competition in Mexico. Making her way to the final with an impressive series of performances, Gibson took to the field in the Gold Medal match against Sara Lopez from Colombia whom she had beaten in their previous two meetings this season, including a World Cup victory in Medellin. The Lopez versus Gibson final was highly anticipated and did not disappoint with Gibson losing out by just two points in a suspenseful encounter that saw Lopez secure the World Cup title for the seventh time.

Gibson, 22 years old from Gloucestershire, has had a terrific year winning gold in the Compound Women’s event at the Hyundai World Cup Stage 1 in Antalya and then again in Paris for Stage 3 of the tournament where she broke the European record. Shortly after she went on to overtake Sara Lopez as world number one after beating Lopez to take gold at the World Games in Birmingham, Alabama. Securing gold in Medellin at the Hyundai World Cup 2022 Stage 4 event put Gibson in a positive position for the World Cup Finals in Mexico.

Proud of her performance Gibson said: “It’s been a surreal experience to be part of this event, the city and organising committee went above and beyond for us having the largest audience I’ve ever seen. Of course I am a little disappointed to walk away without winning but the world cup final is something I have never experienced and gained so much from. This whole year has been incredible for me, if you asked me at the start if I would make the world cup final this season I would probably have laughed so to finish this way may not be everything I want but a great stepping stone forward. I know I’ll be back there with another chance to win and more experience under my belt to do it and I can’t wait.

Bryony Pitman took to the archery field on Sunday in the Women’s Recurve World Cup quarterfinals, facing an enormous challenge against number-one seed Misun Choi of Korea. It was a closely contested event and after tremendous effort and skill from Pitman, her time in the World Cup ended here with a 6th position overall.