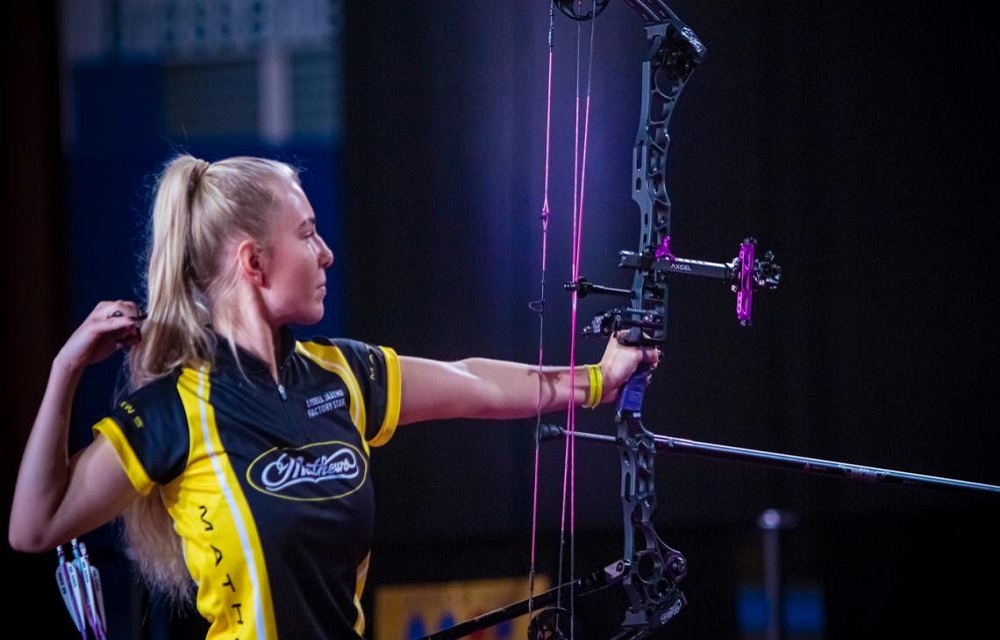 Having had a break-out competition at this venue 12 months ago, today’s victory made it two wins in two consecutive editions of this storied event for Jaatma, despite the significantly disrupted year in between the two competitions.

“It feels great,” said Jaatma. “I was under a lot of pressure. I was actually pretty nervous, so it’s great.”

The 21-year-old dropped two points in the first end but only one more over the next 12 arrows, steadily building a lead that would prove unassailable, especially after Paas dropped two of her last three shots into the nine ring.

It was an assured performance from Jaatma, far less on edge than the match she shot to beat Tanja Jensen in the final in 2020.

Under the focus of the cameras, although without the same passionate crowd that normally gathers to watch the medal matches in Nimes, she dealt exceptionally well with the expectation she said she felt was placed on her shoulders following her prior result in this arena.

Spectators were banned this year due to the ongoing pandemic.

But the small number of local volunteers made noise enough for French archers Jean Philippe Boulch and Adrien Gontier as they entered the field to contest the compound men’s title.

Gontier started better, shooting a 30 to Boulch’s 29. But that first lost point would be the last point the gentle giant dropped through the 15-arrow, 18-metre match. He took a deserved victory, 149-144, keeping at least one of the Nimes titles on French soil.

“It’s not easy to approach an arena like this; 149 is a good score, but the most important thing is to win. I’ve always been told that, to have one point more than the opponent,” he said.

“Nimes is still the biggest competition that exists in France, so we have to participate. Winning it remains a big challenge, and I won today – and it’s great.”

Restrictions to protect athlete wellbeing meant that only around 110 – rather than the normal 1000-plus – archers could compete at the event this year. There were no youth or senior categories, and the competition focused purely on the professionals. But among the reduced number were plenty of archers with extensive international experience, Olympic silver medallists Lisa Unruh and Jean Charles Valladont among them.

Unruh is one of the handful of archers to have seemingly benefited from the one-year delay to the Tokyo 2020 Olympic Games.

The 32-year-old had surgery early in the year and has spent many of the recent months getting back to full competition strength ahead of the upcoming outdoor season. She looked in fine form in a five-set defeat of Gaby Schloesser in the recurve women’s final.

“It was so nice to be here, to shoot here, to have these emotions, the feeling of competition. I’m really happy,” said Lisa.

The German archer looked bemused when her first arrow of the match landed wide right in the eight on the top spot. Another would go there in the second set and a third in the fourth – all in almost identical places.

“I don’t know what was wrong,” Lisa admitted. “I think the light conditions weren’t so good for me. I just focused on my technique and carried on.”

Schloesser took the first set but couldn’t capitalise on her opponent’s later mistakes and, after Unruh shot a perfect 30 in the third set, lost her foothold in the match. Lisa delivered a final 10 to split the fifth and take it, 6-4.

The archer who finished better, not started better, won it.

It was the same case in the recurve men’s final, featuring two archers who have recently shot perfect matches in front of the cameras at invitationals held alongside remote stages of the Indoor Archery World Series in Gijs Broeksma and Steve Wijler.

He hit a couple of nines early on – but rocketed to victory, 7-3, on the back of eight consecutive 10s to shut down the match. Broeksma was in it until the halfway point, levelling the affair with a 30 in the third set, but lost momentum in the fourth and fifth.

“It‘s always important to close it out with a 30. The way I look at it, indoors you always need to shoot a 30,” said Steve. “But when your opponent has shot a nine and you only need a nine to win the match, it‘s always easier to shoot the last time.”

Steve was effusive in praise for his Dutch teammate.

“It’s always really nerve-wracking to shoot against a teammate because you know what they’re capable of,” he said.

French archers secured three of the four bronze medals in Nimes, including one for 2004 Olympian Jocelyn de Grandis, who recorded his best major tournament result this decade. Robin Jaatma – Lisell’s brother – took third in the compound men’s event, having been the one to knock out top seed Mike Schloesser in the quarters.

The fourth and final leg of the remote international indoor circuit is set to take place on 12-14 February, with an accompanying live event – the Rushmore Rumble – taking place in Yankton, USA.