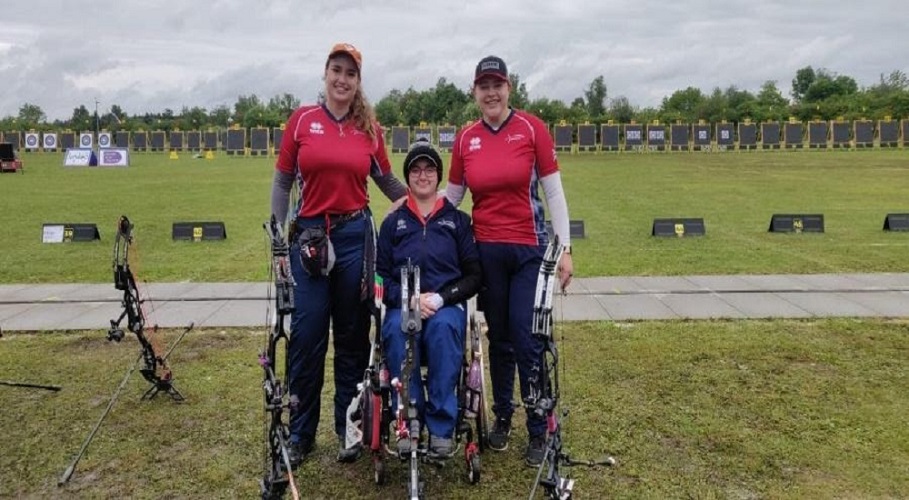 Archery talks about its unrivalled inclusivity as a sport for all ages, genders and abilities. As one of the only sports in which non-disabled and disabled participants as well as widely different ages can compete against each other, archery seeks to breaks down barriers like no other sport.

This weekend the GB Women’s Compound Team competing in the European Championships in Munich put this inclusivity into practice at the elite level when Ella Gibson, Izzy Carpenter and Jess Stretton who won Paralympic Gold at Rio in 2016 - a young team competing together for the first time - stepped into the arena and won a fantastic gold medal for GB.

And it was a busy weekend for Izzy Carpenter who had also secured herself a shot at the individual European Champion title and the prospect of two gold medals. Carpenter beat France’s Sophie Dodemont in the final of the Compound Women individual competitions to securing the second gold medal of the weekend for GB.

Carpenter commented, “Honestly, it’s not sunk in yet. Double European champion… it’s surreal! I am so proud of myself and how I shot. This is the best outcome for the week that I could’ve ever wished for. From the start of the match, I tried to concentrate on the shot and just let the rest happen. The time went so quickly and before I knew it we were onto the last end. I gained the lead from the start and I told myself that if I could hold onto that then I would be okay.”

Jess Stretton commented, “It feels so surreal to be able to compete at an able-bodied European Championships and come away with a medal, let alone a gold one. It’s an amazing achievement that I didn’t think I’d be able to do. Shooting in the finals was nerve racking as always, but it was easier knowing both Ella and Izzy were with me.”

Ella Gibson added: “It feels amazing to be able to come away as European Champions with our team debut. I am really proud of us for not only how we have shot this week but how we have worked together and I can’t wait for another opportunity to compete with these two girls. I felt quite relaxed shooting in the finals, I think my bit of experience out there really helped to keep me calm.”

On the team’s gold win, Izzy Carpenter said: “It’s honestly incredible. To come here as a brand-new team and earn the gold medal is amazing. As soon as I shot my first arrow, I relaxed quite quickly and could focus on shooting good shots. We performed today just like we did in the rounds running up to now, which just goes to show how good we work together. This is the first medal the GB compound women have ever won at a European Championships. To be a part of the team who did that is a surreal feeling.”

Archery GB Performance Director, Tom Duggan commenting on the European Championships and the inclusivity of archery said: “There were four other Para athletes besides GB competing in Munich which really highlights the inclusive nature of archery across the international landscape. The photo of Jess, Izzy and Ella together is a really powerful image showing how disabled and non-disabled athletes can compete together in archery and come away with medals. There were also some really positive performances from the recurves who came away with four places for the European Games.”

The European Championships in Munich also saw the GB Men’s Recurve team – Tom Hall, Patrick Huston and Alex Wise – shoot their way from being 10th ranked to competing for bronze. Having to win a shoot-off against host nation Germany to secure the top four spot, they did just that. Not only placing themselves in the medal matches but also securing a full Recurve Men’s quota for the 2023 European Games.

Anyone wanting to take up archery as a regular hobby should visit Archery GB’s Start Archery website, to find out which of the UK’s 823 clubs is most accessible and local to them.

With unrivalled inclusivity and easy access, now is the perfect time for people of all ages to try something new and different.