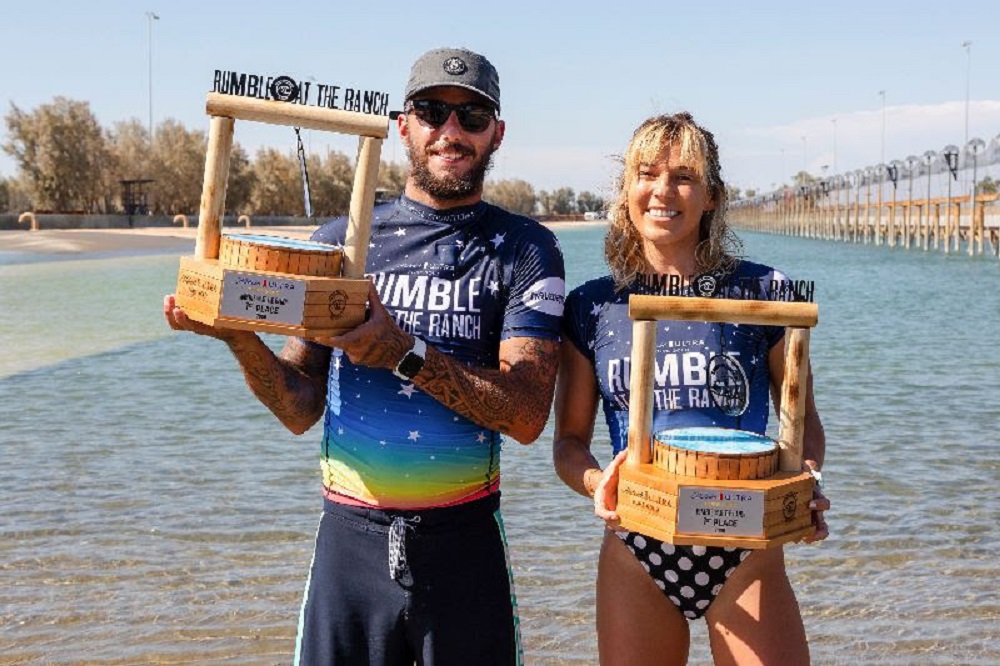 Coco Ho (HAW) and Filipe Toledo (BRA) have won the Michelob ULTRA Pure Gold Rumble At The Ranch, a one-day, winner-take-all surf showdown in the perfect waves at the Surf Ranch in Lemoore, California. 16 of the world’s best surfers paired up for the first-ever mixed tag team event, with prize money going to charity.

Inspired performances from Ho and Toledo saw them defeat Olympic qualifiers Tatiana Weston-Webb (BRA) and Kanoa Igarashi (JPN) to take the event title thanks to a near-perfect wave from Toledo (9.67 out of a possible 10) and the highest scoring wave of the day. The winning pair nominated Surfrider Foundation’s LA Chapter as the recipients of a $10,000 charitable donation in their name.

Ho and Toledo powered through the draw to reach the Final, defeating Alyssa Spencer (USA) and Kolohe Andino (USA) in the Quarterfinals, and then eliminating Sage Erickson (USA) and the 11X WSL Champion Kelly Slater (USA) in the Semifinals.

Igarashi and Weston-Webb dominated their opening match-ups, with two of the highest heat totals of the day, sending home Lakey Peterson (USA) and Griffin Colapinto (USA) in the Quarterfinals, followed by Caroline Marks (USA) and Adriano de Souza (USA) in the Semifinal. However, the pair fell short in the Final and weren’t able to post the excellent-range scores required to take the win.

“We all compete to have those situations where we get to perform under pressure, and that’s what I’ve been missing the most these past few months,” said Igarashi. “I definitely got my dose over the last couple of hours. It’s an epic format and Tati has been surfing so good.”

“It was fun out there today and it felt good,” said Slater. “It’s different because there’s not so much on the line but there’s a little bit of that competitive feeling there. Sage and I have been having fun and having some practice sessions, getting ready and talking about our game plan.”

The Ultimate Surfer
During an interview, Slater revealed that filming had wrapped on the upcoming ABC series “The Ultimate Surfer”, a new competition series where some of the world’s greatest up-and-coming surfers train and live together as they battle it out at the WSL Surf Ranch for the opportunity to compete on the WSL Championship Tour.

“I consulted on the show,” said Slater. “It’s been really exciting and super fun. There’s been some great surfing happening and everyone really stepping up. There have been some surprises and I’m looking forward to seeing the edits. I saw some really good surfing go down.”

"Yesterday was surreal to watch that beautiful empty left and imagine and celebrate Uncle Derek it was awesome,” said Ho. “I’m very thankful to everyone for making it happen."