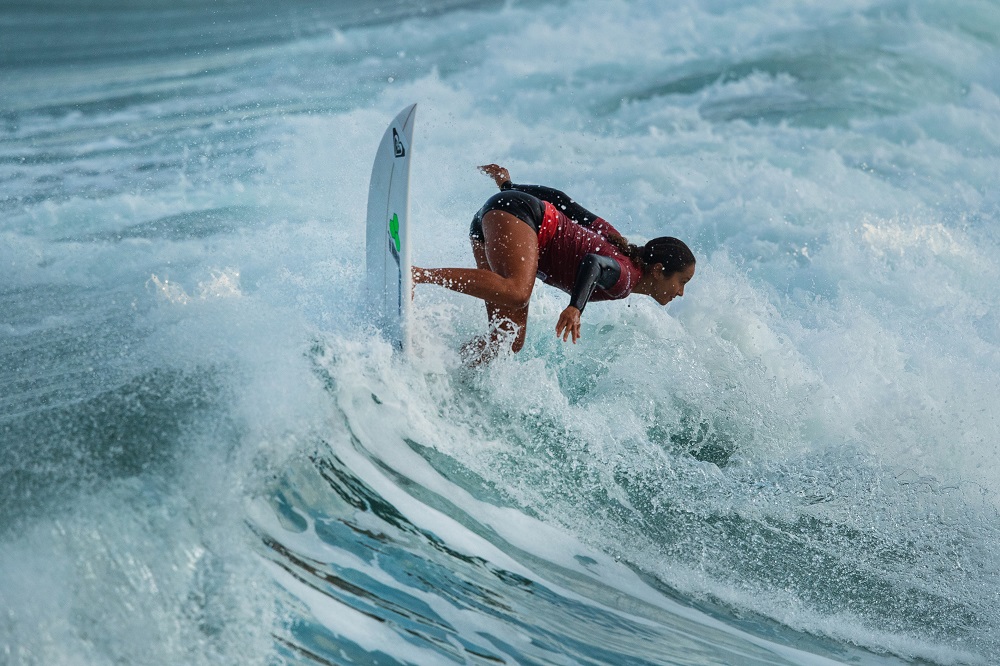 Titles for Ferreira & Defay at French Rendez-Vous of Surfing

The World Surf League and its athletes competing in Anglet today donated a US$20,000 cheque to Ajudam Pignada! in support of relief efforts to protect and rebuild the iconic Chiberta forest partially destroyed by a fire in July.

What started as a dreamy morning with clean waves and beautiful sunny skies unfortunately turned a little sour with strong onshores and a few drops of rain in the afternoon. But that didn’t keep some of the world’s best surfers from lighting up the Chambre d’Amour lineup, turning quick closeouts into ramps and displaying just how technical their game is.

The forecast unfortunately didn’t leave much choice but to run with a heavy front approaching Anglet in the remaining two days of the event window.

Despite a rocky start at first, reigning World Champion Italo Ferreira (BRA) was quick to turn things around as he built momentum and started dominating in the tough Anglet lineup. The Brazilian made small work of the windy conditions and started flying all over the place racking up wins on his way to the Final. On the other side of the draw, Andy Criere (ESP) was the giant killer as he dispatched Kanoa Igarashi (JPN) in the Quarters and Michel Bourez (FRA) in the Semis before joining the World No. 1 for the Final heat.

The Final started with an average number for both goofy footers but Ferreira quickly stepped on the gas as he launched into a crazy backside rotation to post an 8.57 and take a firm grip on the lead. He backed it up with a 7.00 shortly after and Criere’s worst nightmare was in full form. Despite numerous efforts, the Spaniard couldn’t quite elevate his level to fight on Ferreira’s level and the World Champion remained undefeated since Pipeline last year.

Since claiming his maiden World Title in Hawaii at the end of last season, Ferreira has been busy dropping crazy free surf clips to entertain a craved fanbase during the pandemic.As soon as competitive surfing re-started, the Brazilian returned to his winning form, first at the Onda Do Bem Countdown event at home last week, and today at the French Rendez-Vous of Surfing in Anglet.

“That was fun, another great warm-up!” Ferreira said. “I’m really happy to win this event, last week in Brazil was more of a fun thing and today felt more like a real contest. I’m stoked and let’s go to Portugal!”

With a runner-up in the very first edition of the Pro Anglet in 2015, a win last season and today’s Final, Andy Criere (ESP) has become the most consistent surfer at the Chambre d’Amour as he continues to prove he’s one of the strongest competitors in Europe.

“It’s clearly a dream scenario for me to finish that event surfing against Italo and it felt like a privilege,” Criere stated. “In the water it definitely pushed me to do my best, I tried my hardest on every wave and even if it didn’t work out this time, that’s exactly the direction I want my surfing to go. I’ll take a lot of positives away from this event.”

The final women’s clash was one for the ages between one of the best surfers on the planet, World No.8 Johanne Defay (FRA), and a legitimate contender for a future spot on the elite Championship Tour, Tahitian Vahine Fierro (FRA). Both surfers dominated from the get-go in Anglet and it seemed inevitable to find them head-to-head going for the event title in the Final.

Defay was quick to get a couple rides under her feet to build a little heat total and apply pressure on her opponent. Her first two scores came for powerful forehand snaps on the short and punchy rights while Fierro focused on the lefts and struggled to find a section. As soon as the Tahitian went to her backside attack, a single, high-risk maneuver was enough to reverse the situation and lead the final with under ten minutes on the clock.

An exciting back-and-forth battle ensued with both surfers improving their scoreboard on the next few waves, but when the dust settled it was Defay in the winner’s seat and Fierro settling for runner-up.

The 3-time winner on the Championship Tour, Defay may have rocked up barely in time for her first heat of the morning, but she was in dominant form from the start and never showed any sign of slowing down until claiming the win almost twelve hours after her first heat.

“It was a tough final,” Defay said. “I started ok and the both of us improved our scores, and just before the end I lost my priority which was a bad mistake on my end. I tried to escape her paddling around and I was lucky to go on a little double-up foamy one at the last second. My experience did definitely help in this situation and I’m happy to get the win. Vahine is surfing amazing and that’s not even her type of conditions, I think she’s going to be great.”

The 2017 World Junior Champion Vahine Fierro (FRA) has been steadily coming up the ranks on the Qualifying Series and building a strong reputation for grace and power in all types of conditions. She proved it again today, making her way through a star-studded lineup to reach the Final where she unfortunately had to settle for second place. The WSL Countdown being a window into next season, she will definitely be a force to be reckoned with and a favorite in the race to qualify for the Championship Tour.

“Waves were quite tough all day,” Fierro said. “That final was close the whole way and unfortunately I only lost it in the last few seconds. That’s where you notice the kind of experience Johanne has, competing on the CT for years. It’s definitely a lesson-learned on my end and I’m really happy for the experience. That long time off has been a blessing for me, spending time in my paradisiacal home of Tahiti and now I’m starting to look forward to competing again full time soon hopefully.”

Things did not go exactly according to plan for the reigning World Champion early this morning and the biggest stone in his shoe was junior sensation Kauli Vaast (FRA). The young Tahitian surprised everyone as he took out the third heat of Round 1, sending the number one seed to the elimination round.

Ferreira’s walk in the park through Round 2 preceded another tense matchup as he met the wildcard again in the Quarters in the afternoon’s windy conditions. Vaast continued to show no fear whatsoever and put Ferreira in an uncomfortable position, needing two new scores in the dying moments of their heat. The Brazilian bounced back with two airs to turn the heat, but the biggest takeaway is Vaast has the tools to put the world’s best against the ropes.

“That’s what’s cool about being a wildcard, you always get to measure up against the best,” Vaast acknowledged. “I’m happy I managed to get the first win, and unfortunately in that last heat I feel like my mistake cost me the heat. There wasn’t much time left and I had priority, I shouldn’t have let him out of my sight. But conditions were tough and I should have known, he’s the World Champion, of course he can get two scores that quick. I’m still happy with my performance, I think I showed I have what it takes to surf against the best.”

“In the first heat Kauli clearly got the best waves and he beat me fair and square,” Ferreira admitted. “But I suppose it was my time in the second one and I was stoked to get on with it.”

Ferreira and Defay were awarded a beautiful piece of craftsmanship in the form of traditional makilas, the walking cane handmade in the Basque Country, by the Bergara family for over two hundred years. The two Makilas were made specifically ahead of the event and engraved by hand with the event name.