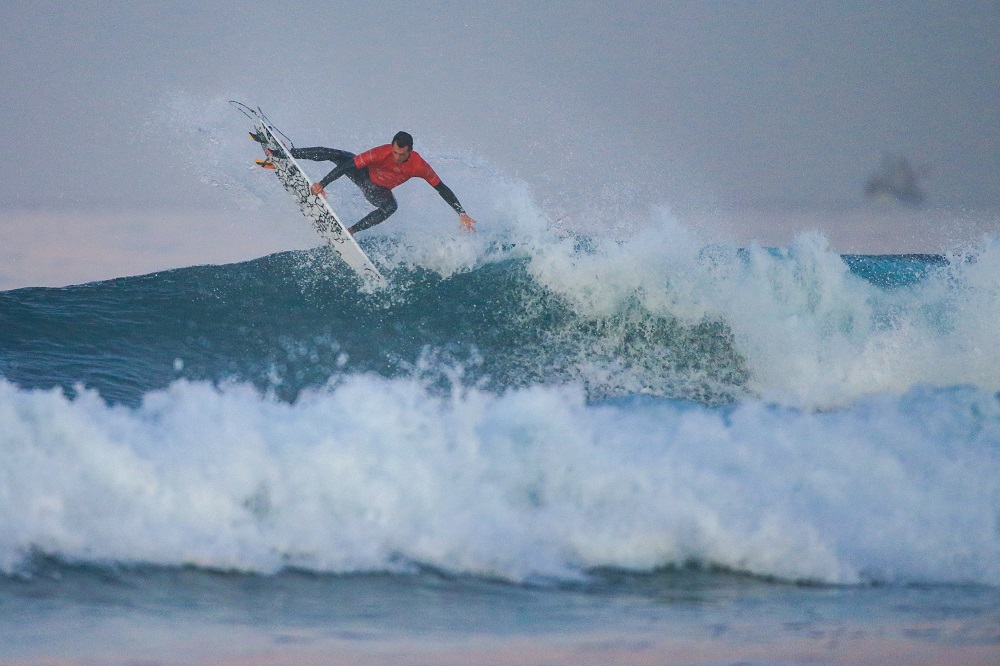 An incredible third day of competition went down at the QS5,000 Pro Taghazout Bay with pumping surf at Anza.

A fresh new push of swell arrived today in Morocco, and while the first few hours didn’t show the full potential of Anza, when the tide hit that mid-high mark the lineup changed completely from good to epic.

That switch came just in time for Thiago Camarao (BRA) and Patrick Gudauskas (USA) in Heat 10 to go blow for blow, shredding the long rights to pieces. It was a power surfing showdown and while you might have expected the Californian to take the nod, it was actually Camarao who lit up big times, posting two incredible scores for a total of 18.24 (out of 20).

“Everyone was ripping in that heat and I knew when I got the right wave I had to give my very best,” Camarao said. “So given the opportunity that’s what I did, conditions got epic and I wasn’t expecting waves that good. Two 9s is close to a perfect heat and it’s amazing.”

Despite a reputation for his prowess above the lip, it’s well and truly on the wave face that the Brazilian made the difference today, showing flawless rail game and variety in turns to find near-perfection on two waves for the highest heat total of the entire event so far.

“I’ve been doing the QS for a long time and it’s true that everyone knows me for my air game,” he continued. “Airs are great but only if you make them, it can be a 9 or a 1 so I’ve decided to really work hard on my rail game and keep the air card for when I really need it. Morocco is special, it’s one of the first trips I did when I signed with my sponsor Reef like fifteen years ago and I keep excellent memories of it.”

Vasco Ribeiro (PRT) and David Van Zyl (ZAF) kept the intensity going in the following heat with excellent scores on demand, but it was really Marco Mignot (FRA) and Jake Marshall (USA) who challenged Camarao on the scoreboard just one heat later.

Their 30-minute bout was another forehand surfing masterclass with a mix of power carves and fins release in and above the lip from the two young competitors. Marshall got the highest single score with a 9.37, the best of the whole event up until now, but Mignot got the edge with his 17.47 heat total over the Californian’s 17.37.

“That was a really fun heat with Jake and I’m happy I managed to beat him,” Mignot said. “When that right stands up all the way in, it’s just perfect to show what you can do and I’m happy I surfed a couple really well. I visualized that heat before I went out and I just executed my plan and did exactly what I wanted.”

Marshall narrowly missed his spot for the Championship Tour last season and looks in deadly form early on in the year as he embarks on another qualifying bid.

“As the tide came up it started firing and I kind of had to calm myself down,” Marshall stated. “When people told me about the Moroccan Trestles honestly at first I had no idea what they were talking about. But today yes it definitely reminded me a lot of Trestles, it has that nice tapered soft wall and it’s super rippable and easy to surf, it’s just super fun!”

Local surfer Redouane Regragui (MAR) surfed arguably the heat of his life as he matched up on his adopted home spot with World No. 6 Kanoa Igarashi (JPN) in the very first heat of the day. Conditions were still pretty slow early on and the Moroccan perfectly played out his strategy to find two good waves and take the second advancing spot behind Igarashi.

“I felt good this morning, I had my little warm up and established a strategy,” Regragui explained. “This is my spot, I surf here almost every day, I managed to not stress too much and I’m happy to make it through. Kanoa is like an idol for me, I watch all his clips and heats so it was unbelievable to surf against him today. I’m so happy to watch all the pros surf this week, I’m learning so much and I’m sure I’ll improve just taking notes from what I see in this event.”

The South African contingent made serious progress on this third day of action as well, qualifying five out of six surfers into Round 3. As the first event counting on the African rankings, surfers not only battle for the 5,000 QS points on offer but also for an early lead in the regional title race.

As waves continued to pump into the night, the event will stay at Anza for Day 4 with an early call at 8 a.m to potentially run the remaining heats of Round 2 as well as Round 3.