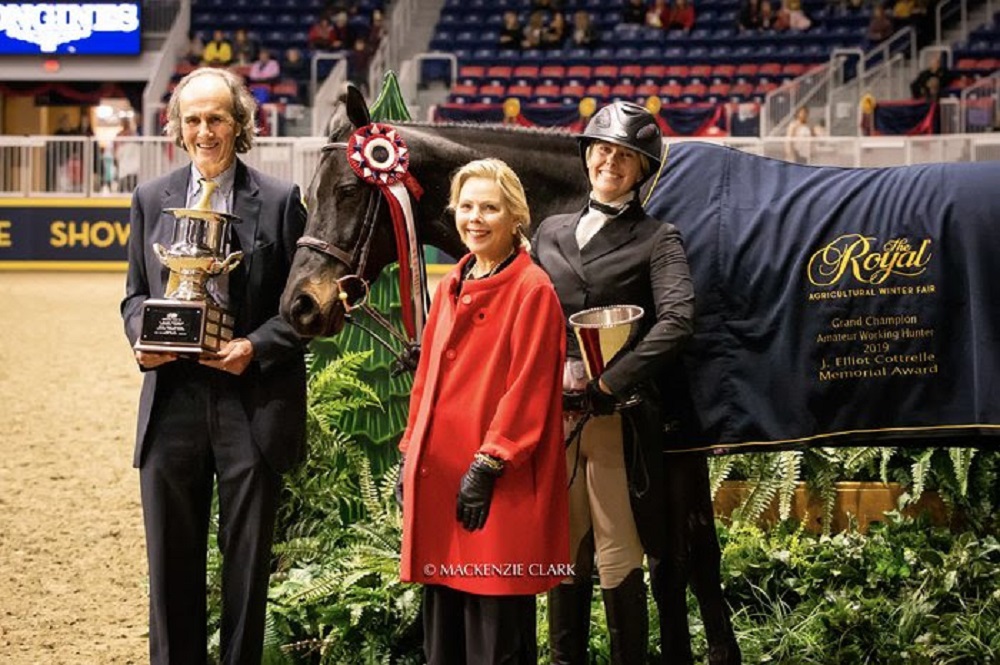 Tennille Kerrigan is back and winning

Tennille Kerrigan of Pickering, ON, closed out her 2019 competition season by winning the J. Elliot Cottrelle Royal Grand Champion Amateur Hunter title aboard Strong Suit on Monday, November 4, at the Royal Horse Show, held as part of the 97th Royal Agricultural Winter Fair in Toronto, ON.

There was a time that Kerrigan, 37, never imaged she would be back in the saddle. She was involved in a tragic snowmobile accident five years ago that sidelined her from riding with a severe concussion and debilitating whiplash. After a long period of recovery, Kerrigan was still unable to ride without suffering from migraine headaches.

“Riding is my passion,” said Kerrigan, who patiently endured various treatments from doctors all over the world to help her migraines subside. “I have been doing it since I was five years old, and to be back after such a long break is a really surreal experience for me.

“This was my first season back, and it has been an incredible experience from the start,” continued Kerrigan. “We were champion four or five times out this summer, and Strong Suit has been unbelievable.”

During her comeback year, Kerrigan qualified to compete at the Royal Horse Show for the first time in the Cornblum Adult Amateur 36 & Over division. After winning the under saddle class, she and Strong Suit earned a second and two fourth-place finishes in the over fences classes. Having won the division championship, she and the eight-year-old gelding owned by Quincy Hayes and Chris Sorensen ultimately claimed the Grand Amateur Hunter title.

“I first met Strong Suit in Florida last winter,” said Kerrigan, who trains with Quincy Hayes and her mother, Darcy, at Benchmark Equestrian. “Darcy and Quincy are the best in the business, and when I got back into the sport, I approached them to see if they would have me as a client. I’m very excited that they accepted and helped me with this partnership.”

An amateur competitor, Kerrigan is president of Senior Helpers Canada and owns various restaurant franchises throughout the country that keep her busy when she is not riding. Despite her full schedule, Kerrigan set The Royal as a goal early in the season.

“This is everyone’s dream; to be able to grow up and compete at The Royal,” said Kerrigan. “It certainly was mine, so to qualify to ride in this division and then to have it end the way it did is incredible.

“This was Strong Suit’s first time at The Royal as well,” continued Kerrigan. “He has never experienced anything like this, and he never put a foot wrong. It was so special.”

Reserve champion honours in the Adult Amateur 36 & Over division went to Christel Weller of Keswick, ON, riding Know How, a horse she owns together with the Ballard family’s Looking Back Farm.