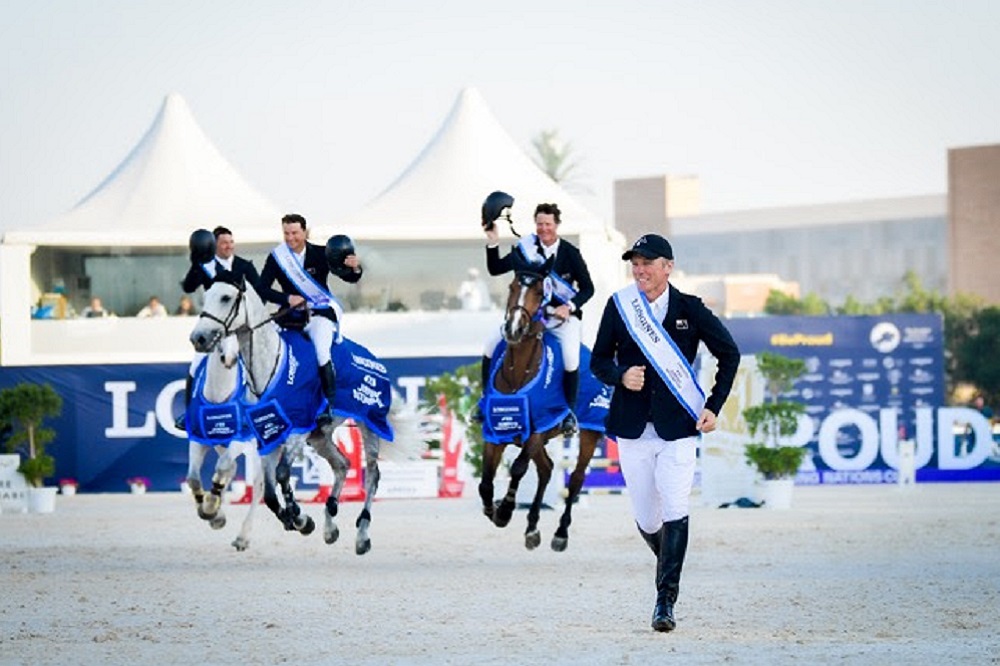 New Zealand claimed the honours in the Longines FEI Jumping Nations Cup™ of the United Arab Emirates at Abu Dhabi (UAE) for the second time in two years today when pinning Egypt into runner-up spot and the host-nation into third.

It was another piece of Kiwi equestrian history in the making as anchorman, Daniel Meech, explained.

Daniel Meech (NZL): "This is only the second time a New Zealand team has ever won a Nations Cup - our first was here in Abu Dhabi in 2018, so this is a really special place for us!"

said the 46-year-old rider who was also a member of that first-time winning side and who helped clinch today’s victory with the only double-clear of the competition.

This second round of the 11-leg Longines FEI Jumping Nations Cup™ 2020 series was the single qualifying competition for teams in the Middle East region. And after a spirited battle filled with plenty of drama, the UAE and Syria have made the cut to the Final in Barcelona (ESP) next October. Only three countries fought that particular battle, and it was the Kingdom of Saudi Arabia who lost out when finishing last of the six competing nations.

But Spanish course designer Santiago Varela, the man who will build the tracks at the forthcoming Tokyo 2020 Olympic Games, upped the pressure second time out by replacing deeper cups with flat ones and raising a few poles. There were eight clears in the first round, including a particularly gutsy one from Saudi Arabia’s Dalma Rushdi Malhas and Impero Delle Schiave, but Meech produced the only clear of the second round to leave his team on the winning score of just eight faults.

The Egyptians were lying third, carrying just five faults as the second round began despite elimination for their pathfinders Mouda Zeyada and Morocco who won Friday’s President of the UAE Grand Prix in which Egyptian riders filled three of the top ten placings. The innocuous-looking oxer at fence one put paid to Zeyada’s first-round effort when his 12-year-old stallion slammed on the anchors there, and when the pair collected eight faults second time out that was the team discount score as Mohd Osama El Borai (Quintero), Mohamed Talaat (Darshan) and Abdel Said (Arpege du Ru) each had a fence down to bring their final total to 17.

However they found themselves neck-and-neck with the UAE at the end of the day when a single mistake from Al Marri, double-errors from Al Kirbi and Al Owais and five for Al Kumeiti second time out saw UAE also complete on a score of 17 faults. And when the combined times of the best three riders from each team were taken into account, an agonising 2.12 seconds separated the two sides with the hosts dropping to third while Egypt clinched runner-up position.

The three-man German team lined up in fourth with 37 faults while Syria finished fifth with 44. The Syrians collected just 11 faults first time out but their second-line rider, 19-year-old Osama Al Zabibi, was eliminated for a fall in round two while the rest of the team added 33 more. However they are on their way to the 2020 Barcelona Final.

In the end the Kiwi victory was clean and clear even though they were reduced to a team of three when Gardener didn’t return to the ring. Four-time Olympian Bruce Goodin and Backatrops Danny V lowered only the first element of the penultimate double second time out while Tom Tarver-Priebe, in only his second-ever Nations Cup outing, hit the same fence with Popeye. So when double-Olympian Meech made no mistake it was all done and dusted, and it was another great moment for New Zealand sport.

Talking about the ups and downs of the day, Meech said afterwards,

Daniel Meech (NZL): "It was disappointing for Richard (Gardner) because he aimed his horse for this class, but you get used to performing in adversity in this game and we put our heads down and ground out the win!"

His lovely 11-year-old grey mare, Cinca, a daughter of Casall, was very impressive today and with Tokyo 2020 selection very much in his mind Meech was happy with her performance.

“She’s really nice, I felt she jumped even better in the second round when a few of the fences went up. She’s quite green at this level and it was amazing how she just walked in and did it so easy. She’s really grown into herself this year”, he added.