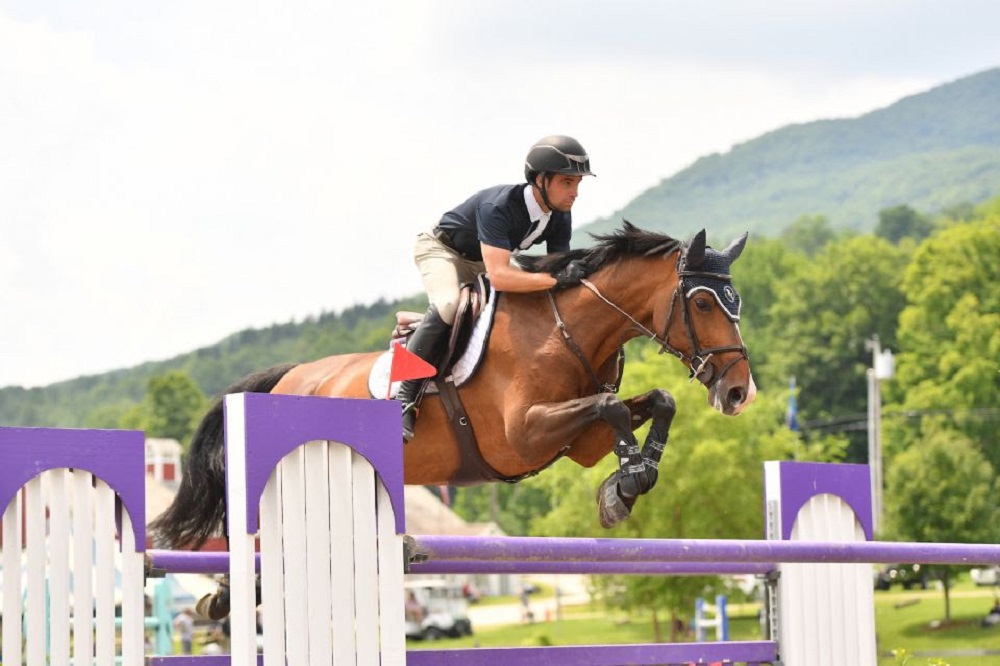 Riding Nuca 2, Mealiff was best in a field of 14 jump-off contenders and posted a blistering time of 37.52 seconds over tracks set by course designer Paul Jewell of Ewing, NJ. The Vermont Summer Festival is only Mealiff’s third show aboard Nuca 2, but the pair have become fast friends and earned their first victory together over New Zealand Olympian Kirk Webby. Riding Brando du Rouet, Webby posted a jump-off time of 38.75 seconds for owner Tolleshunt Investment Group.

“I thought I was fast enough on my first horse, but I saw Kirk go and he was quicker,” said Mealiff, who also finished third riding Viper Vrombautshoeve Z in 38.95 seconds for owner Maarten Huygens. “I did six [strides with Nuca 2] to the double instead of seven, which everyone else did, and then I got the inside turn after. That made all the difference.”

While he originally hails from Ireland, Mealiff is now based out of North Salem, NY, where he is the rider for Maarten Huygens Horse Sales. Nuca 2, a nine-year-old Dutch Warmblood mare, is a new addition to Huygens’ string after previously campaigning under the direction of Jonathan McCrea (USA) and Michael Hutchinson (IRL).

“She seems to be so genuine,” said Mealiff of the mount that he plans to step up into international competition this year. “I was very tight and close to the second-to-last oxer, and she didn’t hesitate, bounced off the ground with ears pricked, and galloped away to the next jump. She is finding a bit more scope every day, and I’m really happy with her.”

After making his debut at the Vermont Summer Festival in 2018, Mealiff plans to call Vermont home for several weeks this season, noting, “After last year, we knew we wanted to spend more time here. The town is lovely, and the atmosphere at the horse show is great. We have the two horses here this week and more arrive next week.”

In addition to his share of the prize money, Mealiff was presented with a show scrim by Mona's Monograms as well as $1,000 in G.H. Bass & Co. gift cards from Manchester Designer Outlets representative Kelly Cutler.

U.S. riders were hungry for an Independence Day victory, but settled for two top-five placings with Colin Savaria of Ocala, FL, riding Helios to fourth for The Helios Group. They stopped the short-course clock at 40.68 seconds, while Lainie Wimberly of Ridgefield, CT, rounded out the top five with RF Quarterman, owned by Brigadoon Show Stables, Inc., in 43.89 seconds.