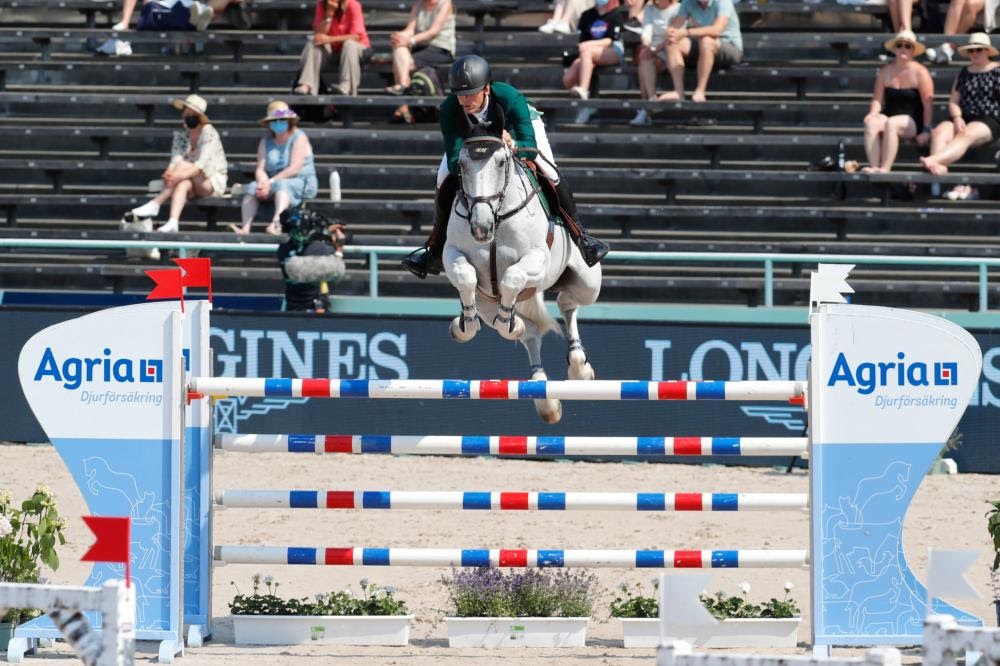 It was a fairytale finish for local hero Peder Fredricson as he closed the Longines Global Champions Tour of Stockholm weekend with a spectacular win infront of passionate Swedish fans.

The current LGCT ranking leader Fredricson reigned supreme in the 1.55m Agria jump-off class, riding his consistent 15 year old grey Catch Me Not S. The Swede was on flying form all weekend after helping Valkenswaard United take the team win yesterday in GCL.

An emotional Peder said: "It feels amazing, my horse jumped incredible today and I am really proud of him. He has a huge stride and great mentality and it is a pleasure to ride him. I am always extra motivated to do well on home ground and I’m really happy his owner Ebba Berglof was here to watch."

The final course of the weekend was a twisty challenge with a tight time allowed of 83s, set by Italian maestro Uliano Vezzani. There were faults all over the course as riders needed control, pace and precision if they wanted to be in with a chance of taking the lion's share of the €148,400 prize purse.

There was disappointment for top combinations of Ludger Beerbaum and Carloz Lopez as just a single time fault kept them out of the jump-off today. It was a six man jump-off with three chances for a home win, keeping the enthusiastic equestrian fans on the edge-of-their-seats the whole way through.

First to return to the ring, Peder Fredriscon knew he had to throw down the gauntlet to the rest of the field and worked hard to put the pressure on the rest of the riders. The huge-striding horse powered around the course and sprinted down the final line to take the last at an angle finishing clear and in a rapid time of 31.98 seconds. Leaving the rest of the field having to play catch up.

On form Marlon Módolo Zanotelli and his fiery Grand Slam VDL attacked the course with bravery and determination, the keen 10 year old stallion powering to the fences and flying to take the second double clear of the class but couldn’t match the pace of the Swedish sensation to cross the line in 33.16 seconds.

Wearing the yellow armband in honour of young Tiggy Hancock, Irishman Micheal G Duffy looked faster from the off, but lost time after an initially strong start on Vertige de Galarzacs. Taking all the risks two fences fell and the pair came home on 8 faults with slow time of 36.88s.

Fresh from their win earlier on in the day Sweden’s Henrik von Eckermann and Glamour girl were one of the favourites in front of the home crowd but it all fell apart from the get go as the pair picked up 16 faults and had to settle for sixth place over all.

The final chance for Sweden was Douglas Lindelöw and Cheldon who clearly wanted to add a Swedish trophy to their accolades. The pair lost time in the rollback and kept them out of glory today finishing in 33.64 seconds but picking up the final place on the podium.

Last to go Irishman Mark McAuley and the experienced Jasco vd Bisschop managed to deliver another strong clear just a fraction behind the time in 34.13s handing Fredricson the win and dropping the talented combination to fourth overall.

After a disappointing finish in the Longines Global Champions Grand Prix of Stockholm presented by Fabege yesterday Peder turned it around on home turf and took the win in style.