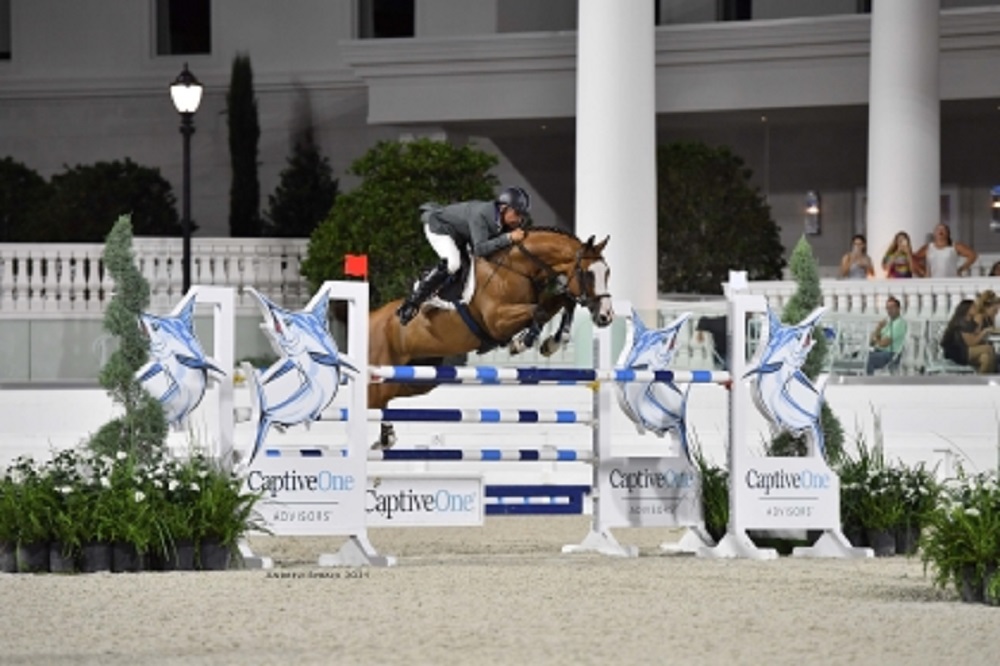 Australia’s Rowan Willis and his own Blue Movie (Chacco Blue x Showtime) were the second entry to secure a return to jump the short course in Saturday night’s class. Willis and the 15-year-old AES mare jumped a clean and smooth first round, stopping the clock at 78.177 seconds. Willis and Blue Movie returned for the jump-off, galloping from fence one to two in 12 strides. The pair took a tight inside turn after fence three, to roll to the double combination. Willis and Blue Movie flew through the rest of the course with forward distances to stop the clock at 40.955 seconds, which ultimately earned the duo second place in the $75,000 CaptiveOne Advisors Grand Prix.

Willis also earned a clean first-round on his second mount, Wellington Grey Goose. Willis and his own Wellington Grey Goose flowed through the first-round course, making it look easy, stopping the clock at 81.862 seconds. Willis returned for the jump-off, chasing his own time on Blue Movie. Willis and the 10-year-old Warmblood mare galloped from fence one to fence two in 12 strides, which allowed for a nice jump to fence three. The pair galloped through the rest of the course hugging the inside turns, to stop the clock at 43.891 seconds, to earn third.

The last double clear pair to enter the jump-off was Aaron Vale and Major, who have captured five Grand Prix wins at World Equestrian Center – Ocala. Vale and the 13-year-old Danish Warmblood gelding delivered a fast and smooth first round in 79.505 seconds, well under the time allowed of 83 seconds. “Major is an amazing horse. He is fast off the ground and over the fence,” said Vale.

Vale and Major (Carmargue x Pinot) were the second to last pair to return for the jump-off. After riding Prescott in the jump-off, Vale had a good idea about how the course rode. Vale and Major galloped from fence one to two in 11 strides, setting a fast pace for the rest of the course.

Vale was in it for the win, “I really took a flyer at three, where I made up a good amount of time. Even off that speed Major was still able to make a good turn back to the next jump. Then the combination came up on a nice gallop, where I could go inside [the gazebo] to the big oxer. I ended up catching the oxer going forward, so I had a ton of momentum going to the last fence. As I was galloping to the last fence, I had a pretty good idea that I had the class, so I had the option to slow down but I didn’t want to take him out of his rhythm. I figured I was just as likely to have the last fence down if I were to put another step in, so I just kept going and he kept it up.”

Vale and Major flew through the timers stopping the clock at 38.692 seconds, more than two seconds faster than second place finishers, Rowan Willis and Blue Movie. Aaron has a good luck charm that he carries with him during each competition, “When I go into the ring, I always have one of the Roberts crosses in my pocket. Tonight, I actually have two.”

An additional $5,000 was awarded to Callen Solem and Essenar Crixus, the fastest four-faulters of Saturday night’s $75,000 CaptiveOne Advisors Grand Prix. Solem and Essenar Crixus delivered a fast first round, rolling through the turns, with just one fence down to stop the clock at 78.660 seconds, well under the time allowed of 83 seconds, earning the pair the $5,000 prize.

The non-award winning entry that received the Luck of the Draw $5,000 prize was Holly Shepherd and CHS Krooze.