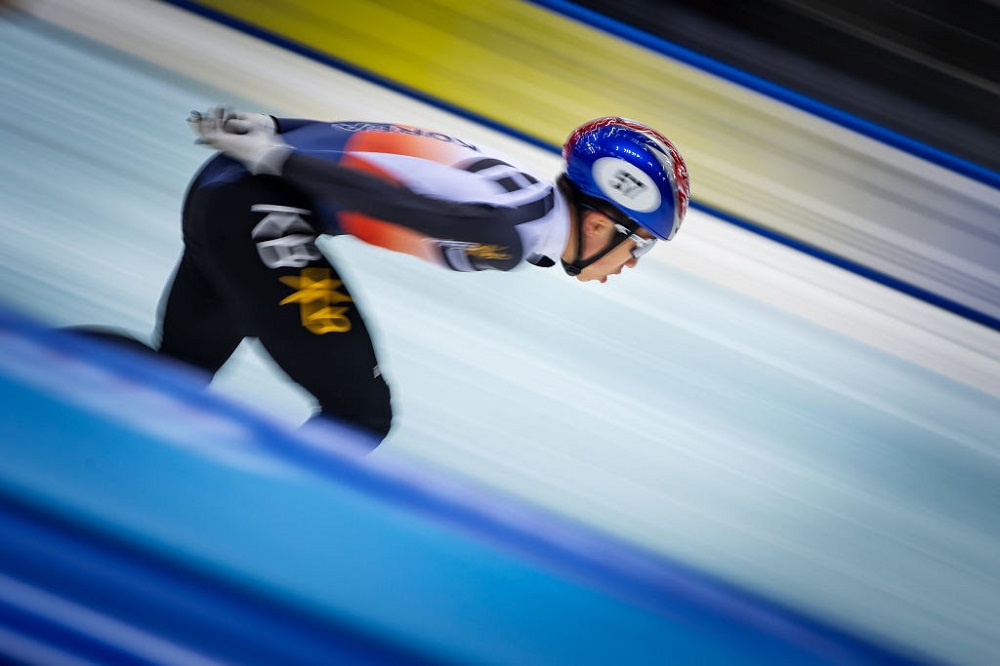 With three gold medals on the final day of ISU World Cup Short Track Speed Skating in Dresden (GER), Park Ji Won (KOR) came out as the weekend’s big winner, establishing himself as the No.1 male short track skater in the world.

After first winning the 1000m final on Sunday, the 23-year-old then skated from fifth to first place in the ninth of 14 laps in the race for the 1500m gold medal, keeping the lead until the finishing line, chased by silver medallist Semen Elistratov (RUS) who finished 0.392 seconds ahead of Hungary’s John-Henry Krueger.

”There were too many high-level skaters in the 1500m final so I wanted to move to the front early and control the race to win,” Park said.

”If I tried but someone passed me, I would still be on the podium. I just didn’t want to be behind anyone from the beginning because everyone is so strong, I really have respect for them."

The success in Dresden means Park tops the World Cup rankings for 1000m, 1500m and overall.

The Korean finished off a strong weekend with a third gold medal as he, Hwang Dae Heon, Lee June Seo and Park in Wook won the Men’s 5000m Relay ahead of World Cup leaders Russia and bronze medallists Netherlands. The result means Republic of Korea are only 400 points behind Russia in the overall World Cup relay ranking with one competition to go.

Park is looking forward to defending his positions in the sixth and final World Cup stop in Dordrecht (NED) next weekend and to start preparing for March’s 2020 World Short Track Speed Skating Championships in Seoul (KOR).

”I’m very happy. I feel like I’ve built up my body now and the happier I am, the better I skate. There’s more to come this season and I’m ready for it,” Park said.

Delight for Dubois with first victory

In the Men’s 500m final, Steven Dubois (CAN) waited behind superstars Hwang and Liu Shaolin Sandor (HUN) for three laps before sprinting to the front to win his first individual World Cup gold medal, screaming out his joy as he crossed the finish line.

”The feeling of winning a gold medal is indescribable. This is definitely the achievement that I’m most proud of so far in my career.”

Dubois’ plan had been to ”wait until something was happening”. Then the skaters in front of him collided and his teammate Cedrik Blais crashed out of the race. Hwang, who crossed the line in second place, got a penalty and Liu won the silver medal having finished just 0.029 seconds in front of Melle van ’T Wout (NED).

”My plan in the beginning was to gain as many spots as I could in the first corner and then wait until there was something happening and if there was nothing happening I’d tried my best,” he said.

”I was laughing before the race. I had nothing to lose, I was fifth on line so I just thought I’d try my best and if I’d get a medal I’d be super happy, but if not, as long as I’d tried something then I’d be happy.”

Dubois, who is competing in his second World Cup season, gained a lot of confidence last month when he won silver medals in the Men’s 500m, 1000m, 1500m, 5000m Relay and overall as his hometown Montreal (CAN) hosted the ISU Four Continents Championships.

”Winning bronze medals last season and staying consistent in the 1500m and translating that into other distances this year has made me super confident. I think I gained a lot of momentum in the Four Continents and I think that’s showing a bit now,” he said, adding:

”And I grew a bit tired of the silver.”

Overall World No.2 Liu, who won the event at the European Championships on home ice in Debrecen (HUN) in January and tops the World Cup 500m ranking, was happy to finish ahead of overall Four Continents Champion Hwang.

”I was going for gold and then there was a little clash (with Hwang) but I was really happy with the second place,” said Liu, who leaves Dresden with two silver medals and a gold.

”Hwang is really strong and he’s got really good lines but I think I’m the only only one who can beat him now. I’m right behind him so he better watch out.”

Overall ladies No.1 Suzanne Schulting (NED) had struggled in the Ladies’ 1000m final on Saturday, having to settle for a bronze in her favorite event after the race was forced to a restart, with Kim Ji Yoo winning the gold. But the Olympic Champion bounced back to win the weekend’s second 1500m final on Sunday, beating silver medallist Sofia Prosvirnova (RUS) and Tifany Huot Marchand (FRA).

”I’m super happy,” said the 22-year-old, who stayed within the top-three for the entire race.

”I was just building up my speed and trying to keep the lead, changing the lines to keep the girls behind me. Especially the Korean (Kim) because I was skating against her in the 1000m final.

”Yesterday was a really sad day for me because 1000m is kind of my thing, then we had to do a restart and the Korean girl (Kim) was really strong. She deserved a medal for sure but I wasn’t really sharp in my head mentally. Today I wanted to redo that and I was really sharp in that final, so I’m happy with that.”

For Prosvirnova, who struggled with ”some sort of cold” in the end of last year, the silver was her first individual medal this season, showing that she is on the right track.

”The first part of the season was a little unlucky and this medal really means a lot of me and brings back some confidence,” she said.

”Now I’ll just try to come back stronger for the Worlds and I feel more than good for it.”

Canadian star Kim Boutin, who missed the Four Continents Championships with a knee injury, had plenty of reasons to smile again this weekend. Not only did she show her new engagement ring to the audience at EnergieVerbund Arena, she also won her fifth 500m gold in five World Cup stops this season.

”I’m very happy and enjoying my days at home too, so it helps,” Boutin said after finishing head of Qu Chunyu (CHN) and Lara van Ruijven (NED).

”I can dedicate the gold medal to (her future husband) of course, but it is mainly for myself, this one.

”In the final I wanted to be relaxed and to focus on the last lap because it’s always there that I slow down and my technique goes worse. But I kept it until the end so I’m pretty happy.”

Van Ruijven returned to the ice alongside Schulting and teammates Rianne de Vries and Yara van Kerkhof as Netherlands rounded off the weekend by claiming gold in the Ladies’ 3000m Relay, with China winning silver and Japan taking bronze.