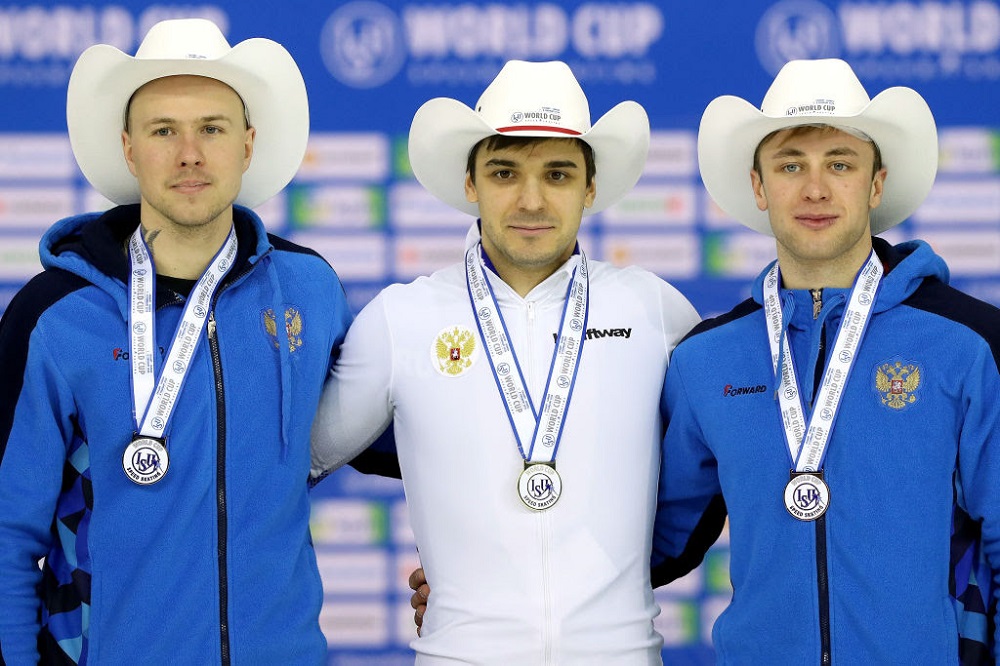 Russia’s men have fired a warning message to their rivals ahead of next week’s world championships in Salt Lake City with a dominant display on day one of the fifth leg of the ISU World Cup in Calgary.

Ruslan Murashov, Pavel Kulizhnikov and Viktor Mushtakov swept the podium in the opening 500m with the smallest possible margin between them, while teammate Denis Yuskov went on to triumph in the 1500m.

In the ladies' tournament Nao Kodaira (JPN) took her first 1000m World Cup gold of the season in a season's-best time of 1:12.65 and 3000m winner Martina Sáblíková (CZE) is also looking in great shape as the season's climax approaches.

Men's 500m: Russian 1-2-3
Kulizhnikov was the first of the Russians to take on the fast, high-altitude ice at the 1988 Olympic Oval in the second pair.

The world-record holder, who returned to action in December after missing the first three World Cup events of the season, took on PyeongChang 2018 Olympic champion Håvard Lorentzen (NOR). Kulizhnikov left Lorentzen behind quickly to finish just 0.05 seconds short of his own track record in 34.05. His Norwegian opponent, who has been struggling for form this season, clocked 34.61 to end up 15th.

World Cup overall leader Mushtakov skated versus third-ranked Tatsuya Shinhama (JPN) in the eighth pairing. The Russian had the fastest opener of the field in 9.41, but could not match Kulizhnikov's 24.43 full lap and finished 0.01 short of his compatriot. The Japanese record holder had to settle for fourth place in 34.22.

Murashov went next, and with 9.65 he had the slowest opener of the Russians, but he skated the fastest full lap of the field in 24.39 to edge out Kulizhnikov by 0.009 seconds.

The fourth Russian in the A Division, Artem Arefyev, was unlucky in his race versus Kai Verbij (NED). The Dutchman stepped on a marker in the final inner corner and almost took down Arefyev as he wiped out. The Russian stumbled but managed to stay on his feet and was given a chance to re-skate. He ended up 18th in 34.77.

"The relationship in our team is very good,” silver-medalist Kulizhnikov said. “Mushtakov joined the team later, but that doesn't mean that there is a hierarchy between us. We're colleagues and we make each other stronger.

"My own race was far from perfect today. It was full of mistakes, especially in the second corner where I held back a little not to run any risks a week ahead of the world championships [in Salt Lake City, 13-16 February]."

All three Russians skated faster than the previous season’s-best time of 34.16, set by Dai Dai Ntab (NED) last week. In Calgary the flying Dutchman skated a disappointing race to finish in 34.60 seconds after his start was delayed to allow for ice repair following Verbij's crash.

"After that I also had a false start,” Ntab said. “I didn’t hit a single stroke well in the first 300m. When your timing is off in the 500m, you end up outside the top 10 just like that.

"My race was far from perfect today, but I don’t think the Russians are out of reach. Those times don't impress me much. [It would have impressed me] if they had skated 33.5, but these times … I know I can do that too."

“I tried to skate a good opener, but 23.46 … it's normal, it's not good. Then in the next inner corner I tried to stay low, which was not bad but after 700m I couldn't stay that low any longer because my legs were tired. I just had to hang in there.”

Krol, Nuis and Roest, the Dutch numbers one, two and four in the overall World Cup ranking prior to Friday’s racing did not compete in Calgary to save energy for next week's world championships.

“It is what it is,” Yuskov said, after moving up to second in the overall ranking with this victory. “My first distance in Salt Lake City is the 5000m and the 1500m is only on the final day. I don't know how it will play out next week. We'll see.”

With the Dutchmen absent, 20-year-old Ning posted a personal best to finish second and take over the lead in the World Cup standings.

“I skated up to my abilities and I'm satisfied with my performance,” he said.

“Of course I also have my thoughts [about racing in Calgary a week before the world championships], but I'll just have to adapt and show my best again next week."

Ladies' 1000m: Kodaira surprises herself
Arriving in Calgary, USA skater Brittany Bowe had won all three 1000m World Cup races this season, and with a time of 1:13.13 she also held the season’s-best mark in the distance.

By the time Bowe stepped on to the ice at the 1988 Olympic Oval on Friday, Russia’s Yekaterina Shikhova (RUS) had already lowered that time to 1:12.84.

Bowe also skated faster than her previous best of the campaign but was not able to break the 1:13 barrier, finishing with 1:13.06 to place sixth despite clocking the fastest final lap of the field in 28.36 seconds.

Skating in the penultimate pairing, Kodaira and Daria Kachanova (RUS) shared the fastest opener of the field with the Russian in 17.44.

In the final pairing Olga Fatkulina (RUS) opened slower than Kodaira, clocking 17.70 at the 200m split, but managed to skate the fastest first full lap of the field in 26.51 and finish with another fast 28.59 lap. Her personal best of 1:12.80 was good enough for a silver medal and Shikhova dropped to third place overall.

"I was just enjoying it,” said the eventual bronze medalist, who was surprised her time kept her in the top three.

Ladies' 3000m: Sáblíková and De Jong rediscover lost groove
She may have already won countless medals in her career but Martina Sáblíková is still surprised when she ends up on top of the podium.

The former Olympic and five-time world champion in the 3000m stopped the clock at 3:54.93 in Calgary on Friday, leaving Antoinette de Jong (NED) 1.24 behind in second place. Natalya Voronina (RUS) took bronze in 3:56.57, meaning Russian skaters picked up a podium place in every event - men and ladies - on Friday.

"Last week [in training] I felt so bad," Sáblíková said. "I could barely skate a lap under 30 seconds. It was horrible.

"We made a video of my skating and my technique was completely off."

The 32-year-old Czech focused on her technique and found the solution with help of some of Italy’s male skaters.

"I did two trainings behind the Italian men. They skated 31-second laps, not too fast, it was a great way to find back my technique."

Another skater struggling with her technique has been De Jong, who has been unable to perfect her timing in the first half of the season. To her great frustration she has not managed to qualify for an individual event at the World Single Distance Championships in Salt Lake City next week.

There were signs of a welcome return to form in Calgary, though, as her time of 3:56.18 cut 1.60 seconds off her personal best.

"I've got more composure in my strides and physically I'm good, that's why I finally got my timing right," she said.

The season's turnaround for De Jong began when she took out the Dutch national allround title on 26 January.

"That gives me a good feeling for the rest of the season, but seeing how close I am now, and knowing that I can still improve a little, I'm gutted that I cannot race next week [at the World Championships in Salt Lake City],” she said.

"But I've shown what I'm capable of and that's a good feeling, which I to carry on towards the World Allround Championships [in Hamar, Norway, 28 February-1 March], which has become my main goal this season."