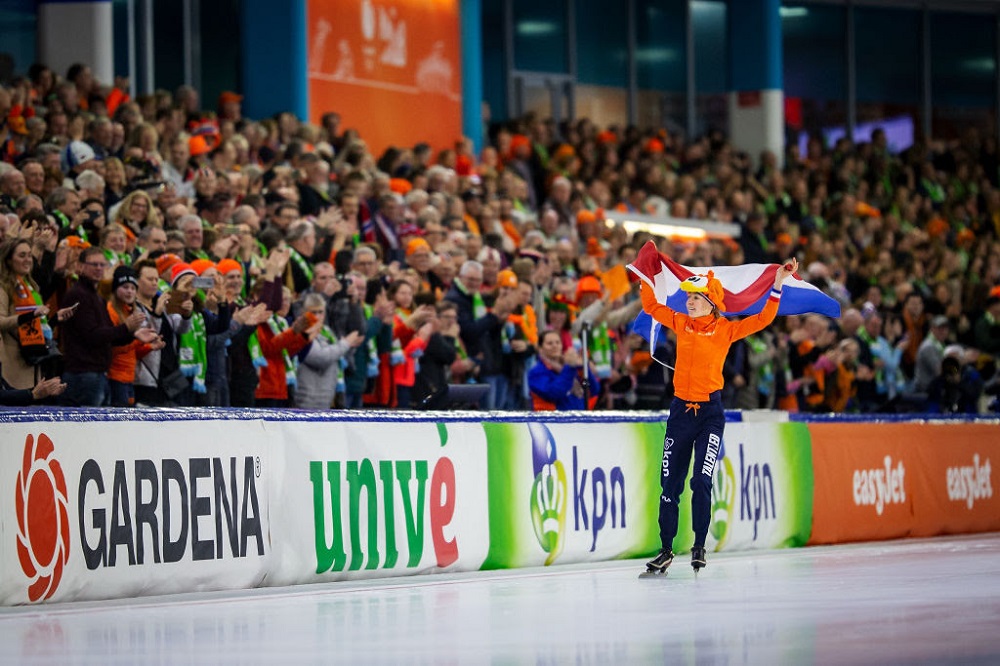 With 9.61 Kuizhnikov opened 0.02 faster than the home favorite, but Mushtakov had the fastest opener of the field with 9.58.

Mushtakov was not able to handle his speed well, however. The 23-year-old Russian lost his balance coming out of the first corner, and while he managed to stay on his feet, he lost too much time to be able to catch up with his compatriot.

Kulizhnikov finished in 34.38, which was just 0.07 seconds outside the track record he shares with Michel Mulder (NED). Ntab had to settle for silver.

"It's a good time and a good race, but I did not show my best shape here," the world record holder commented.

Ntab’s pair-mate Ruslan Murashov took bronze in 34.59. Kulizhnikov praised his young team-mates Murashov and Mushtakov, saying: "This young generation of Russian sprinters shows good results. We all get better because of the team. As a skater you cannot do it all by yourself."

Murashov was happy with his time and he enjoyed skating in front of the crowd of the sold-out Thialf Stadium. He said: "For me this is a season's best time, so I'm happy with it. Competition is of a high level and I love the atmosphere here in Heerenveen."

Ntab had also enjoyed the crowd. "I didn’t hear it during my race, but after I crossed the line I heard this wild roar from the crowd, that's a great experience," he said.

The Dutchman was had mixed feelings about the color of his medal: "When I got off the ice I was a bit down [to miss out on gold], but a little later I was really proud to have won silver - it's my first medal at a major international championships."

Roest wins 5000m in track record
The men's 5000m saw an early start for the man who has dominated the event for more than a decade, Sven Kramer (NED). The reigning Olympic Champion was not able to compete at the top level in the first half of the current World Cup season due to back problems, and went out in the second pair.

Carried by the enthusiastic home-town crowd, Kramer managed to skate a very flat race of 11 29-second laps to finish in 6:10.76.

"It's the fifth time I ever skated here [in Thialf stadium]," Kramer said. "In the past you would relatively easy win with a time like this, but now there's Patrick Roest and that's my own fault."

Kramer's young teammate and pupil Roest is the new dominant force in the 5000m, having won all his races at the distance this season. He entered the rink in the third last pair, alongside track record holder Danila Semerikov (RUS).

Roest said: "I was not aiming at the track record. The most important thing today was to skate a good race and win, but it's nice to have the track record back of course."

The record had not come easy, however: "The first laps were fine, then I wanted to accelerate but I completely exploded in the final lap. With a last 30-second lap, you lose a lot. Luckily enough I had just enough left."

Kramer's 6:10.76 was eventually enough for silver, but Roest isn’t claiming the 5000m crown from his mentor just yet.

Kramer acknowledged that he's still behind Roest, but he won't settle for silver without a fight: "The gap [between Roest and himself] is just 1.8 seconds, while it was 20 seconds in the beginning of this season, so I'm progressing well. I'm looking forward to Calgary [World Cup] and Salt Lake City."

Denis Yuskov (RUS) grabbed the bronze from Jorrit Bergsma in a thrilling final pairing. The Russian was almost two seconds behind halfway through the race, but overhauled his pair-mate in the final lap to prevent the Dutch from sweeping the 5000m podium.

Yuskov had chosen a cautious strategy, starting slow only to accelerate in the second part of the race. "My tactics was to wait and see until after five laps or so, and it worked."

Could he have been faster if he had started out on a higher pace? "We'll see in Salt Lake City [at the World Championships," the Russian smiled.

Dutch junior Femke Kok (NED), who had surprisingly qualified for the European Championships at the Dutch trials in December, had set a high bar for the rest of the field by skating to a World Junior record of 37.66 - only 0.49 seconds outside the track record, in the third pair.

Herzog was the first of the favorites to break that mark, the reigning 500m World and European Champion setting 37.49 in the third-last pairing to push Kok into second place.

In the penultimate pair Angelina Golikova (RUS) finished one hundredth of a second outside Herzog to move into second, before Katkulina entered the rink in the final pair.

The 2013 World Champion opened with 10.54, a tenth of a second slower than both Herzog and Golikova, but she went on to skate the full lap in 26.86 seconds - the only skater to dip below 27. She finished in 37.40, pushing Herzog into second place and nudging Kok off the podium.

The Russian champion said: "The European Championships is a high level competition, [it's like] the Worlds [Championships] without Nao Kodaira (JPN).

"I felt good before the race. Yesterday was very emotional day, with our victory in the team sprint and I was in a good mood today. I'm looking forward to Salt Lake."

Nervous Visser comes out on top
Once the ice-cleaning machines had wiped the sprinter's dust off the Thialf ice, it was time for stamina. Defending champion Visser was the first of the favorites to enter the rink, paired up with Noemi Bonazza (ITA).

The Italian youngster started faster than the hot favorite, but paid the price halfway through the race. As Bonazza's lap times went up into 33 and 34 seconds, Visser continued to skate 31-second laps towards the end, and closed out with a 32.03 lap to finish in 3:59.15.

"I like to skate early [in the field]," Visser said. "[Skating early] I can skate my own race [instead of aiming at someone else's time]. But I hate having to sit and wait afterwards. I don't want to look at these green and red numbers [on the scoreboard]."

Visser's did have to wait a while before victory was confirmed, however. Straight after her race Francesca Lollobrigida (ITA) took on Carlijn Achtereekte (NED). Achtereekte was faster than Visser until the 2200m mark, but the Olympic 3000m champion was not able to maintain her pace over the final two laps.

Lollobrigida even managed to catch up, finishing in 4:01.66 to take the bronze medal. Achtereekte had to settle for fifth place in 4:02.19.

"The pair was very good for me," Lollobrigida said. "I saw that she was getting a bit tired and I knew I had the last inner corner. That was a great motivation to keep chasing in the final lap."

In winning bronze Lollobrigida made amends for a disappointing 10th place in the 1500m on Friday. She said: "I'm very happy with the way I raced today. Yesterday I was feeling really sh*t. I was too tense, not able to skate well. Today I did everything to relax, I even played ping-pong this morning and it worked."

In fact, Lollobrigida was only a whisker away from the silver medal. Natalya Voronina (RUS) skated the exact same time as the Italian but took second place in a photo finish. The Russian, who won a bronze medal at the European Championships two years ago, was happy to have recovered after illness. She said: "I had a health problem in the pre-season and I was ill after Nagano [World Cup in December], so I'm happy with silver in this situation."

Voronina skated in the penultimate pairing, but with Martina Sáblíková (CZE) in the final pair, Visser could not celebrate yet. To Visser's great relief, the multiple World and European champion finished 0.31 seconds short of a place on the podium.

Two days into the tournament, Visser is the only skater to have successfully defended her European title. She said: "I'm super happy about that. I don't like expectations, so it's great that I have lived up to the expectations because I hate to let people down."