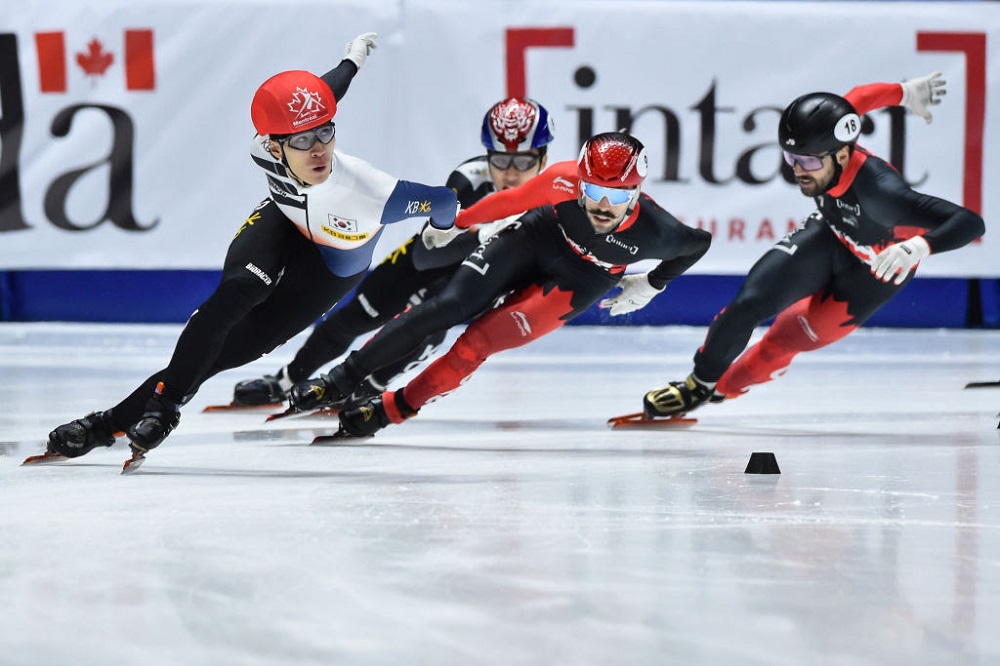 Republic of Korea scored a ‘perfect 10’

Sunday afternoon in Montreal saw the Koreans pick up precisely where they had left off 24 hours earlier - storming to four more individual golds as well as the Men’s and Ladies’ relay titles on the second and final day of competition.

A clean sweep of all 10 available gold medals by Korean skaters was duly rewarded as Choi Min Jeong and Hwang Dae Heon were crowned the first-ever Four Continents overall champions.

Freezing rain did nothing to dampen the atmosphere inside the Maurice Richard Arena. The home fans were given plenty to cheer as Steven Dubois continued his rich form, landing a third individual silver of the weekend in the Men’s 1000m.

Courtney Sarault matched Dubois in the Ladies’ race over the same distance, before the duo led Canada to silver in their respective relays.

There can be no doubt, however, that the weekend belonged to the Koreans and in particular Choi. The comprehensive manner of her victory in the 3000m superfinal, coupled with scooping all five golds available to her, showed that the Olympic and world champion remains the skater to beat in 2020.

“My goal was to get first place overall here, so I’m happy. I always give it everything and now I know a few things I still need to improve before Seoul,” Choi said.

After a weekend of total domination, her determination to keep getting better will send a shiver of fear down the spines of her rivals.

Ladies’ 1000m – More golden joy for Choi
Home favourite Courtney Sarault survived a semifinal scare after a coming together with China’s Li Jinyu, hauling her way into the final with a pair of inspired passing moves.

It was a two-nation affair in the medal showdown, and from lane one Saturday’s double gold medallist Choi played a waiting game for the opening laps as Sarault took to the front.

Kim Alang and Seo Whi Min attacked for Korea but with two laps to go it was Choi who made the decisive move. Sarault responded well and forced the Korean star wide at the bell, but her rival deftly cut inside and eased to the line for another assured gold. Sarault finished with silver and Kim bronze.

“I wasn’t sure I had the legs to battle back in the semi but I relaxed and it paid off. My whole mindset was different today,” the Canadian said.

“Yesterday I wasn’t a fighter like I usually am, but things went better when I refocused and raced from the heart today.”

Men’s 1000m – Hwang toughs it out
A false start from world-record holder Hwang ratcheted up the tension just a notch more in the Men’s 1000m final, and the Korean speedster duly sat back along with Dubois as the first half of the race played out.

With two laps to go, Hwang produced an inspired surge to the front where he stayed to the line. Dubois did likewise, plucking a move out of the Korean’s playbook and instinctively coming inside teammate Charles Hamelin on the penultimate bend to take second. Park Ji Won, who had endured a frustrating day on Saturday, took the bronze.

“Coming here I was aiming for top three in every event so I’m delighted with another silver. When you see other people win you try and improve and learn from what they do, and I’m always trying to learn new ways to skate,” a satisfied Dubois said.

“This is only my second season in the world cups so I’m just making the most of every race.”

The 21-year-old made an early move with just two laps gone, lapping the pack twice and then seeing out the remainder of the race without any threat from the rest of the field to win by more than 17 seconds.

“I didn’t expect to have it my way like that. To be honest, I didn’t think or plan that, I just went and couldn’t believe nobody went with me,” Choi said.

The battle raged behind her for second, however, with Kim Alang eventually digging deepest over the final turns to guarantee herself the silver. Seo Whi Min took the bronze after a mistake by Sarault took her out of the medal reckoning, meaning it was a Korea 1-2-3.

“Let’s just say I’m not that great at maths. I heard the bell and forgot it was for Choi not for me. It’s really frustrating and probably has cost me the overall second, but that’s skating and I’ll learn from it,” said Sarault, who did indeed finish with overall bronze just three points behind Seo.

Men’s 3000m superfinal – Park profits after Hwang falters
In the Men’s 3000m, Hwang employed similar tactics to his all-conquering teammate Choi, flying off from the starting gun, but this time the field responded and all nine athletes were soon back together.

The Chinese pair of Song Jia Hua and Li Wenlong carved out a half-lap advantage but 11 laps out Hwang caught and passed the duo, suddenly opening up a sizeable lead of his own.

With a fourth win firmly in his sights, Hwang pulled up awkwardly on the penultimate lap, allowing teammate Park Ji Won through to collect an unlikely gold. Another Korean, Kim Dagyeom, came home with silver while An Kai’s third place earned a first medal of the weekend for China.

“Something happened with my skate at the end of that 3000m. I’m not sure what, but that was the only disappointing moment to take away from an excellent weekend,” a typically calm and collected Hwang said afterwards. “Considering I wasn’t feeling 100% coming into Montreal, I’m obviously happy with what we have achieved.”

A second fourth place of the day for Canada’s triple Olympic champion Charles Hamelin left him in philosophical mood as he reflected on a tough weekend’s racing.

“My preparation wasn’t as I wanted it to be but I think this was a big move forward after my knee surgery,” he said. “Maybe I would have done a couple of small things differently this weekend but I was happy to feel good.”

It was too close to call as the Canadians sat right on the Koreans’ shoulders for most of the race, but it was Choi’s final stint that made the difference, stretching out a lead that left her teammates to see it home. Silver for Canada was met with thunderous applause as they edged out China.

“We didn’t have Kim [Boutin] in the relay today so we knew we all had to step it up and put up a good fight. It was actually the same junior team of a few years ago in Poland [for the world juniors in March 2018] so it was really special to be all together again and finishing things here with silver feels really good,” Sarault said.

Men’s 5000m relay – Mission complete for Korea
Anticipation levels were high for one final push from the hosts to deliver a gold, but it was the Chinese who made the early play before the pack came together once more.

As the ice began to chew up, the Japanese slipped out of contention as Dubois attacked to put Canada second. Cedrik Blais took the lead briefly for the hosts, but another slip looked to have ended Canadian medal hopes while Korea took up a familiar position at the front of the pack.

Dubois had other ideas, and the final leg saw him produce another superb drive, passing the Chinese to secure a hard-earned silver behind Korea. A penalty for China saw USA finish with the bronze.

“The relay is the event I’m most stressed for, you never want to let the team down. But it’s a fun event to podium in and to do it with those guys felt great,” Dubois said.

Overall – Success breeds success
With five wins in five races, Choi was the unassailable overall champion in the Ladies’ competition.

It was a similar story for the Men, where three Koreans again finished in the top four.

“I really wasn’t expecting to end up with overall silver,” the popular Dubois said. “I don’t quite know what to say … but it feels really good.”