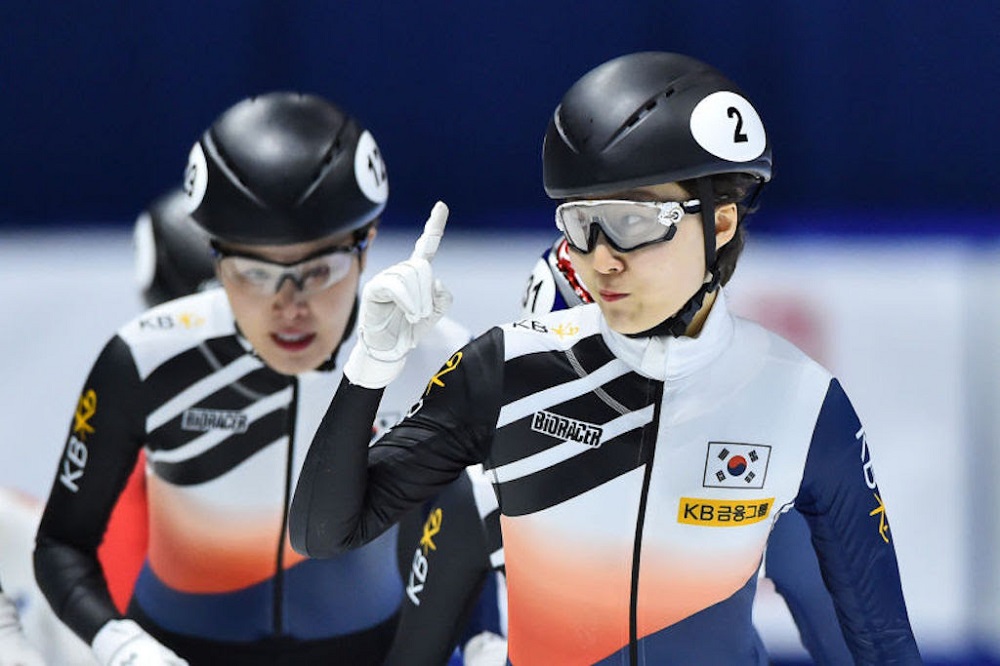 The atmosphere remained electric at the Maurice Richard despite the absence of home-crowd favorite Kim Boutin – the star turn of November’s scintillating world cup competition at the same venue - with her teammates and the impressive Koreans delivering some thrilling racing to wrap up 10 of the 12 medals on offer.

Ladies’ 1500m – One-two for Korea
Following a trio of incident-free semis, the Ladies’ 1500m had the honor of being the Four Continents’ first-ever medal race.

Korea’s Olympic and world champion over this distance, Choi Min Jeong, put on an assured display and took to the front with four laps to go. Looking strong, she really only had to shut the door once on Seo Whi Min, keeping her compatriot at bay in second place.

“I’m really satisfied with today,” Choi said after the first of her two golds on the opening day. “I’ve had a hard time coming back to full fitness after my injury last year, but I’ve improved day by day. I’m not quite there yet, I’d say I’m at 70-80%, so I’m really happy with the result.”

Emerging from a particularly crowded corner with four laps to go, USA’s sprint specialist Maame Biney was able to profit and seize what she admitted was an unlikely bronze.

“My plan was to skate from the front but things happen in short track and there was a lot of people stuck in one corner so I went for it. Everyone knows I’m a short-distance skater so I’m really happy to be up there.”

Men’s 1500m – Dubois delights home crowd with silver
A tense Men’s 1500m final always looked to be building up to something explosive, and so it proved with three laps to go as Steven Dubois made a move to the front to the roar of the crowd.

The Canadian soon found himself sandwiched between the formidable Korean duo of Park Ji Won and Hwang Dae Heon, only for Park to clip his teammate and spin out on the penultimate lap. That left Dubois alone to clinch a superb second while Hwang powered to the line for gold. Thomas Hong took bronze for the USA.

Ladies’ 500m – Double joy for Choi, Canada second and third
After the Ladies’ 500m quarterfinals had been littered with restarts, Canada’s Alyson Charles
and Courtney Sarault progressed from their semi with no issues to set up a breathless final showdown with 1500m medalists Biney and Choi.

Charles burst to the front with Sarault on her shoulder, but on the final turn it was Choi whose experience showed.

Clearly back to somewhere near her instinctive best, as the two Canadians and Biney came together, the Korean timed her move to perfection, swooping through the gap to earn her second gold of the day. Charles finished with silver just ahead of Sarault in third.

“It was a great final,” said Charles. “Coming out of lane one I knew I had to get a good start and then just hold on. Unfortunately, I think I was perhaps missing a bit of energy and there are still some technical points I need to work on to stay strong on the last lap.”

“Choi stayed relaxed and I knew someone was coming through. When I saw it was her I realised there wasn’t much I could do. Overall I’m happy with the day even if [the 1500m] didn’t go how I wanted it to and I made a few mistakes that meant I lacked the energy to punch into the A Final. I feel like I found a good mental state again to go and attack the 500.

“It’s a great start for the first edition of the Four Continents and there are some really strong countries so it looks good for the new championships.”

Men’s 500m – Hwang the man as Park runs into trouble
Park Ji Won may be inclined to chalk Montreal 2020 down to experience. After his disappointment in the 1500m, a semifinal penalty cost Park his place in the Men’s 500m medal race, leaving Hwang Dae Heon to shine once more.

The 20-year-old Hwang managed to position himself out front on the very first corner of the final and never relinquished his grip on the race as he emulated teammate Choi by winning double gold.

Having only returned to training two weeks ago, a lack of full fitness informed Hwang’s differing tactics for his two finals on Saturday.

“For the 1500m I was happier to sit in and watch how the race was going,” he said. “When I made my move to the front I knew it was tight, and that is how it proved.

“It was the opposite for the 500m. I knew I wouldn’t have the confidence to deliver the late power that I might need so wanted to make sure I hit the front right away. I really have to thank the coaches for getting me to this point.”

It was another dominant showing from the Korean, while behind him the crowd again roared on local hero Dubois as he scraped his way into second place on the final turn. Another Korean, Kim Dagyeom, took bronze.

“I was hoping to get at least one medal today so to come away with two silvers and both being my best international results, I’m pretty psyched,” a delighted Dubois said.

“When I got to the front in the 1500m I knew it was too early to go all out but then I got passed by the Koreans and just thought, ‘oh no, not again’. So I focused back up and held firm for the medal.

“I was so happy to make that pass in the 500 Final. That feeling of winning medals at home is probably as good as it gets.”