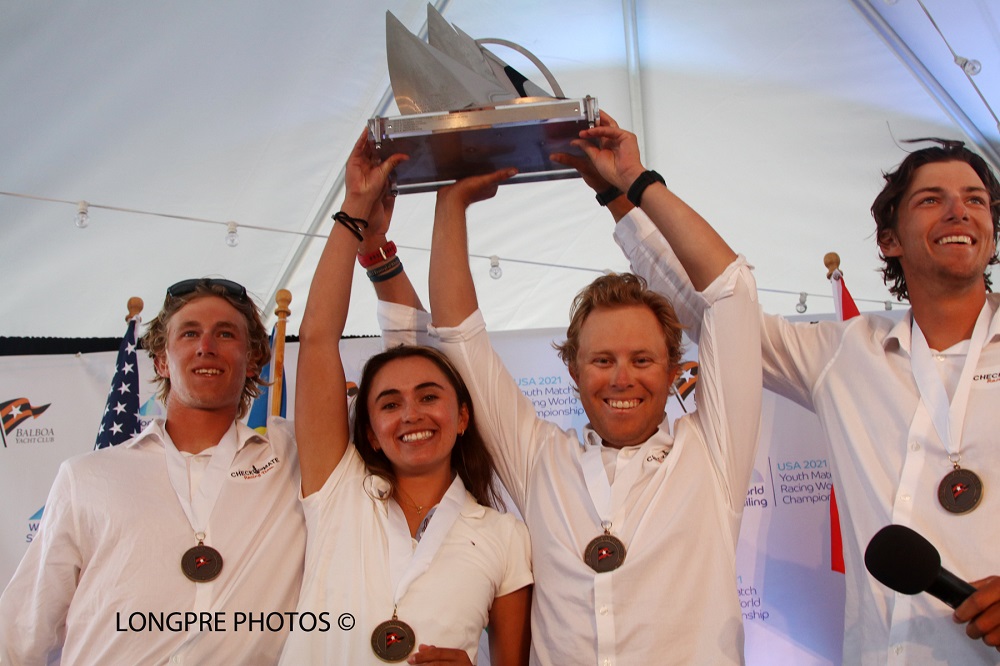 David Wood (USA) of host Balboa Yacht Club “peaked” at just the right time during a summer of youth match racing in which his inter-club rival and friend, Jeffrey Petersen (USA) had beaten him in two major youth match racing events. Both skippers made it to the finals of World Sailing’s prestigious
Youth Match Racing World Championship, hosted by their home club. This time Wood came out on top with a 3-1 score.

But this week, it was Wood on top in a surprisingly easy finals win, other than the first race. In that race, after Wood finally established a seemingly comfortable lead, the two boats approached the finish line with Wood heading towards the Committee Boat end of the finish line. The two boats gybed onto Starboard tack and Petersen’s maneuver was slightly better, and, with a slight puff, he surged past Wood to win at the pin end by a matter of inches.

Petersen made some unforced errors at the starts of the next three races, and seemingly was about to incur a penalty in what turned out to be the final start for a minor port-starboard collision, but it was green flagged by the umpires. They were not in position to see the slight contact. The start ended up even, but Wood got a bit more wind on the left and led around the first mark. As has been the case all week, a narrow lead at the weather mark was always in doubt, but Wood was able to hold his lead to the leeward gate. Petersen did a masterful job on the weather leg to close the gap to about a boat length at the windward mark. Both boats rounded with their usual perfect spinnaker sets and the stage was set for either a great comeback by Petersen or a World Championship for Wood.

The finish was all that could be hoped for by match racing fans and both boats approached the finish in almost the same positions as Race One when Petersen eked out the victory. However, lightning did not strike twice as Wood gybed perfectly at the Committee boat and the two competitors finished with the boats overlapped but with Wood’s bow clearly ahead. The World Championship was his.

Petersen immediately ran to the bow of his boat to congratulate his friend as the boats drifted downwind. Wood and his crew maintained the Governor’s Cup tradition of throwing themselves into the water leaving their boat without a crew. Happily, the BYC “Bosuns” led by Greg Newman were anticipating that and captured the boat as the crew swam to get back on board. The Bosuns did an incredible job in both the “GovCup” and the Youth Worlds in keeping the Governor’s Cup 22 sloops in top condition for both events.

Wood, interviewed after the race, said that he and his crew of Max Mayol, Daniel Pegg, and Marbella Marlo, tried to get 1% better every race in the GovCup and Worlds, and may have exceeded his goal. He said, “Ever since we won the Rose Cup in 2017, we had hoped to win another major match racing event — we finally did it!”

The other two semi-finalists, Emil Kjaer (DEN, Royal Danish Yacht Club) and Riccardo Sepe (ITA, FIV) sailed in the petit final to determine third and fourth places. In what most considered a minor upset, Sepe prevailed 2-1 over the Governor’s Cup runner up. While Sepe lost his semi-final 3-0 to Petersen, Kjaer came back from a 0-2 deficit in his semifinal with Wood, to tie that series 2-2. However, Kjaer unfortunately returned to his Friday form and incurred several pre-start penalties. He succumbed to Wood in a race that was not as close as expected, putting Wood into the final.

The Italian team was obviously pleased with their podium finish as they did a “group hug” once they were across the finish line. Sepe had finished second in the European Youth Match Racing Championship but is clearly going to be a future factor in the match racing world.

The teams not sailing in the semi-finals sailed against each other in a round robin to determine the final placing with both Tom Foucher (FRA) and Marius Westerlind (SWE) having particularly good days in the consolation round robin, moving up in the standings.