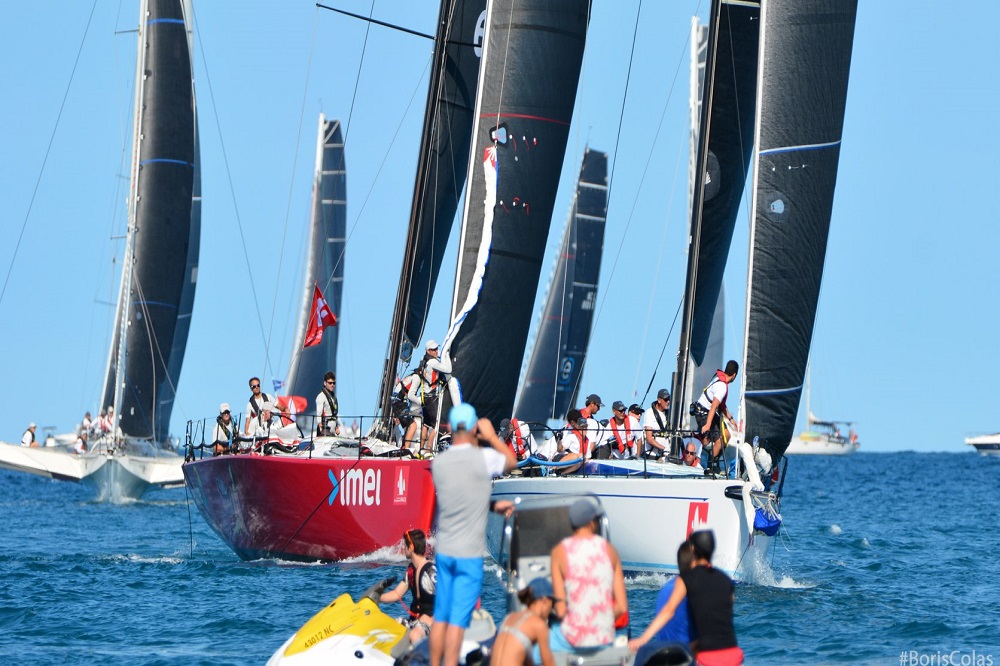 Shane Kearns’ lovely and well-travelled Sparkman & Stephens 34 is the first international entry in the New Caledonia GROUPAMA Race 2020, due to start Sunday June 21 off the capital Noumea and take the fleet in an anti-clockwise direction around the main island, passing through the UNESCO World Heritage listed lagoon to the north.

Renamed White Bay 6 Azzurro to reflect a new commercial partnership, Kearns’ mighty S&S is the maritime version of the children’s storybook, The Little Engine That Could. He relaunched the original Shenandoah II as Komatsu Azzurro in 2014, and over five years the crew has clocked up thousands of ocean miles and recorded remarkable IRC victories against much bigger and newer challengers.

But the Cruising Yacht Club of Australia skipper has unfinished business in the South Pacific. An ill-timed weather collapse mid-way through the 2018 GROUPAMA race stretched the 34-footer’s course time to a gruelling six days, and cost Azzurro’s crew a chance at the main silverware. This came on top of a breezy, record-setting 1,064 PONANT Sydney Noumea Yacht Race the week prior, leaving the six-man crew well and truly fatigued.

Despite this, Kearns’ email to gauge interest for the 2020 New Caledonia GROUPAMA Race among his core crew met with an enthusiastic response. “What surprised me is they all said yes, and within a day! They loved their time in New Caledonia, though both races were really hard. Sydney races tend to be more serious whereas the French create a carnival atmosphere. There’s a stage permanently set up at the marina where daily an expert talks through the fleet’s position and shares the latest race news with the public. Once boats start finishing, skippers are invited up on stage with their crew to talk about their trip. Last time they got skippers up to try speaking French. Hilarious.

“We loved the godmothers and fathers who looked after each foreign crew. They drove us to the supermarket, helped us source water and fuel and spoke to the locals on our behalf. Ours was still helping us clear customs when we finally left Noumea,” Kearns added.

On the sailing he commented, “it’s great! Except for that one period, we had breeze the whole time. Tacking down the windward side of the island, just outside the reef break under a full moon was beautiful, and during the day we could see the islands and incredible landscape.”

The CYCA’s race to Noumea, reinstated in 2018 having been on-hold for quarter of a century, begins June 6, 2020 and five entries have been lodged, including White Bay 6 Azzurro and the 2018 IRC overall winner Smuggler, Sebastian Bohm’s Rogers 46.

As well as preparing for next year’s fully crewed races, Kearns is setting White Bay 6 Azzurro up for two-handed racing with his mate of 25 years, Ty Oxley, in the CYCA’s new four-part pointscore which includes both the 2020 Noakes Sydney Gold Coast and Rolex Sydney Hobart races.

The 654-nautical-mile New Caledonia GROUPAMA Race caters for eligible offshore multihulls and double-handed crews, plus the next edition of the Cercle Nautique Calédonien’s major biennial event includes a cruising division.

Port Moselle marina, where the fleet berth prior to and after the GROUPAMA, is undergoing a major extension to better cater for the international influx. CNC Commodore Philippe Mazard says the new facility will offer visiting boats state-of-the-art services and tie-up facilities.

Both the current monohull and multihull race records were established in 2016.