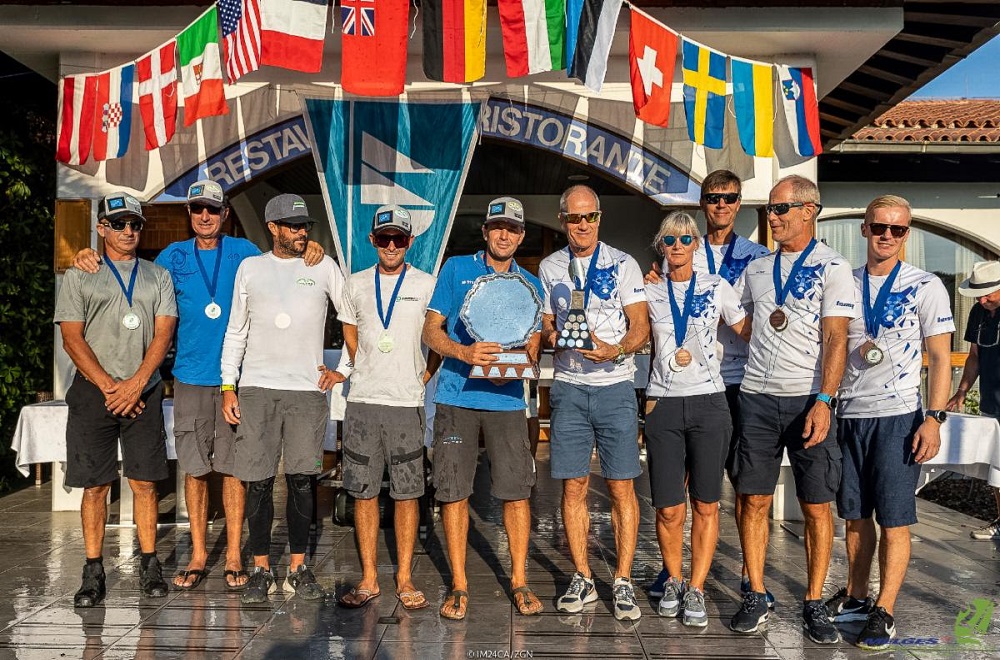 After two full years of hiatus in the title events, the International Melges 24 Class returns to assign a main title: it was October 2019 when in Villasimius Luca Perego’s Maidollis was crowned World Champion for the second time, and, after that moment the pandemic blocked everything, preventing the dispute of the 2020 and 2021 World Championship and the 2020 European Championship.

Just today, in Portorož, the European Championship ended, that should have been held in Slovenia last year: after eleven races, well managed by the Race Committee led by the Melges 24 Class Championship Coordinator David Bartol, to celebrate the conquest of the overall title goes to Andrea Racchelli’s Altea, carried between the marks by Gaudenzio Bonini, Fausto Surini, Stefano Lagi and Michele Gregoratto.

At the top of the ranking from the first day, Altea got the satisfaction of winning one of the few trophies missing from its collection: never in the past Andrea Racchelli, Melges 24 World Champion in 2018 Victoria, Canada and one of the most experienced helmsmen in the class, had climbed to the top of Europe.

Today it happened, with Miles Quinton’s Gill Race Team with James Peters at the helm and Branko Brcin on the pit, ending second after a really solid series and Tõnu Tõniste’s Lenny on the third step of the overall podium with the great satisfaction to celebrate the conquer of the Menno Meyer Corinthian European Trophy for the fourth time (previous times 2007, 2011, 2014).

The fight for the places of honor was resolved only at the end of today's only race, which served to Altea definitively to make the void behind him and to the two pursuers to undermine Michael Goldfarb’s War Canoe from the second position.

Second place on the Corinthian podium was completed by former non-pro-European champion Taki 4, owned by Marco Zammarchi and helmed by Niccolo Bertola, brought by his crew at the fifth place of the overall ranking right ahead of the former Italian Olympian Michele Paoletti at the helm of Strambapapà, winner of Race Eleven.

To found the third force of the competitive Corinthian division, it’s enough to scroll the ranking until the seventh place, occupied by Marco Cavallini’s Jeco Team, perhaps protagonist of the most unexpected performance of the event.

The next time, when the International Melges 24 Class is hopeful to welcome Melges 24 fleet for the title event, is the Melges 24 World Championship 2022 to be hosted by the Lauderdale Yacht Club, Fort Lauderdale, USA in co-operation with U.S. Melges 24 Class Association on May 9-15.

Comments from the winners:
Andrea Racchelli, Altea ITA722: “We are very happy since this is the first time for the European trophy for us. For sure we were fighting a lot since the conditions were very tricky and we had to work hard, especially when handling the boat and the team was doing a great job. We hope to have a next season with bigger number of the boats on the water, however, having 40 boats from 14 nations here in Portoroz, is a good number considering the influences of the pandemic."
Link to the interview

Tõnu Tõniste, Lenny EST790: "We are all very happy for our result. Hence, we have achieved the European Corinthian title for three times before, then the placement on the overall podium is the first one for us and we are especially happy about that. Here the conditions were tricky and light, but we are used to sail in different conditions and for a very long time on this boat - so, comes what may, we are always ready to race and fight for the high results."