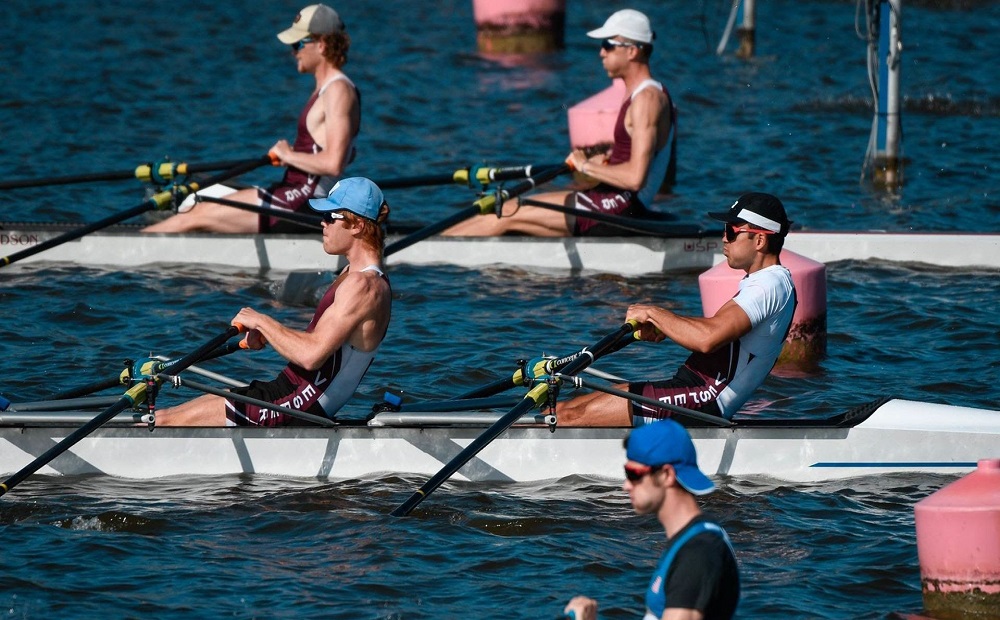 With time trials in the books, side-by-side racing got underway during Tuesday's heats at the first 2020 U.S. Olympic Team Trials – Rowing at Nathan Benderson Park.

"It's a combination of excitement, a little bit of nerves since we haven't been lined up side-by-side next to people off of the start in a while, and relief," said Vesper Boat Club's Jasper Liu (Phoenix, Ariz./University of Pennsylvania) about racing in the heats. "I'd say mostly excitement. We've been building up for this for a while. We've had this as a goal in mind for the past 16 months."

Liu and his boatmate, Zachary Heese (Pelham, N.Y./University of Virginia), recorded the fastest time in the heats of the lightweight men's double sculls. Racing in the first of two heats, Liu and Heese crossed the finish line with a time of 7:12.95, more than 17 seconds ahead of teammates Cooper Tuckerman (Bozeman, Mont./Dartmouth College) and Charles Bickhart (Villanova, Pa./Lehigh University).

"First time in a while going off the starting blocks, so definitely shaking out the cobwebs a little bit there," Heese said. "We were super happy to come out swinging and find some really good rhythm, so great day overall."

In the second heat, Vesper's Jimmy McCullough (Philadelphia, Pa./ University of Delaware) and Josh Remland (Temecula, Calif./Brown University) bested the Riverside Boat Club composite crew of Alex Twist (Boston, Mass./University of Puget Sound) and Hugh McAdam (Hollis, N.H./Washington College) by a little over three seconds. McCullough and Remland finished with a time of 7:16.63, with Twist and McAdam crossing in a 7:20.24. The two heat winners advanced directly to Friday's final.

In the women's single, Cambridge Boat Club's Cicely Madden (Weston, Mass./Brown University) dueled ARION's Kristina Wagner (Weston, Mass./Yale University) the entire way down the course to win the first heat by just under two seconds, finishing with the fastest time of the heats. Madden crossed in an 8:08.59, with Wagner close behind in an 8:10.41. USRowing Training Center-Princeton's Sophia Vitas (Franklin, Wis./University of Wisconsin) won the second heat by more than 10 seconds, crossing in an 8:09.78 ahead of Craftsbury Green Racing Project's Jenifer Forbes (Baltimore, Md./Northeastern University).

"I thought it went pretty well," said Vitas. " It was a nice little headwind. I just tried to stay consistent all the way through. It was fun. It was a good learning experience. It's really exciting to finally put all of the work you've done for two years now and watch it pay off a little bit."

USTC-Princeton's Kara Kohler (Clayton, Calif./University of California, Berkeley), the reigning world championships' bronze medalist, won the third heat by more than 10 seconds in an 8:13.44, while Cambridge's Gevvie Stone (Newton, Mass./Princeton University), the 2016 Olympic silver medalist in the event, won the fourth heat by over nine seconds, clocking an 8:12.30. The four heat winners advanced to Thursday's semifinals.

"I knew it was going to be pretty challenging conditions – slow conditions – so my goal was just to set a really good, light rhythm that would carry me all the way down the course," Phifer said. "I had a pretty rough start, but I was able to be ahead by the middle, and I was pretty happy with the way that it turned out."

In the first heat of the men's single, Craftsbury's John Graves (Cincinnati, Ohio/Trinity College) won by over eight seconds, crossing the line in a 7:41.12. Teammate Lucas Bellows (Forest Lake, Minn./University of Minnesota) won the third heat by nearly 10 seconds in a 7:40.40. The four heat winners advanced to Thursday's semifinals.

After a strong showing in yesterday's time trial of the lightweight women's double sculls, the Cambridge Boat Club/Sarasota Crew composite crew of Michelle Sechser (Folsom, Calif./University of Tulsa) and Molly Reckford (Short Hills, N.J./Dartmouth College) once again set the time to beat during the heats. Racing in the second heat, Sechser and Reckford finished with a time of 7:43.64, more than 20 seconds ahead of their closest competitors.

Mary Jones (Huntsville, Ala./University of Tennessee) and Emily Schmieg (Philadelphia, Pa./University of Pittsburgh), the 2018 World Rowing Championships' silver medalists in the event, won the first heat of the lightweight women's double by nearly 14 seconds, finishing with a time of 7:50.65. Craftsbury's Grace Joyce (Northfield, Ill./University of Wisconsin) and Christine Cavallo (Windermere, Fla./Stanford University) won the third heat in a time of 7:55.06, finishing 14 seconds clear of Mission Rowing's Sophie Heywood (Tempe Ariz./University of Wisconsin) and Sophia Denison-Johnston (Berkeley, Calif./UCLA). The top two finishers in each heat moved on to Thursday's semifinals.